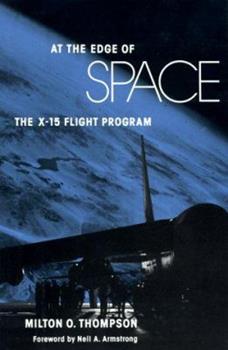 At the Edge of Space: The X-15 Flight Program

In At the Edge of Space , Milton O. Thompson tells the dramatic story of one of the most successful research aircraft ever flown. The first full-length account of the X-15 program, the book profiles... This description may be from another edition of this product.

An excellent pilots view of the X-15 program

Published by Thriftbooks.com User , 16 years ago
Milt Thompson was actually a friend of the family and I workd at NASA Dryden FRC during the years 0f 1966 til September 1967 and was working for the guidance and display branch. I got to meet most of the pilots that flew the X-15 and thatr was really cool part about working there then. Milt Thompson tells the story sort of like you were there talking to him and he tell of a lot of the problems and scary moments of flight in this craft. I think you will find it a book that tells a lot about the various flights and programs that were done using the 3 X-15's. There is quite a bit of humor about their antics as well and I think that the most dangerous parts were not the flights but the after flight parties that they went to after a flight. Truly an enjoyabel book and I've read it probably 5 or 6 times and I enjoy it as much as ever.I was fortunate to have Milt sign my copy and it turned out that he passed away not too long after that.

Published by Thriftbooks.com User , 18 years ago
Much changed at the National Advisory Committee for Aeronautics (NACA) between 1941, when it was surprised by the revelation that the British had a working jet engine that was well on its way to powering an aircraft, and 1947 when it contributed significantly to the cracking of the sound barrier. After World War II the high speed frontier became a special province of the NACA, and the transonic flight research conducted at the agency's test facility in the central desert of southern California achieved legendary status. When the NACA was transformed into the National Aeronautics and Space Administration (NASA), emphasis on the problems of high speed continued unabated. Without question, one of the most dramatic, popular, and successful activities on this score was the X-15 flight research program."At the Edge of Space" describes the conduct of this program from the first flight on June 8, 1959, until the 199th and final flight on October 28, 1968. Initiated under the NACA regime--although all of the flights were made following the creation of NASA--the X-15 program was a joint venture with the military to test both the capacities of rocket-powered aircraft at hypersonic speeds (five or more times the speed of sound) and at extremely high altitudes. Milton O. Thompson describes well the major phases of the program: the testing of engine capability, altitude and speed confines, and human abilities to operate under such extreme conditions. The X-15 program yielded not only this information but also engineering and materials information integral to later spaceflight missions. The author, who spent his career at NASA's Dryden Flight Test Facility in the California desert, was one of the dozen research pilots who worked on the project during its nearly decade-long operation. Because of this background and the emphasis here toward autobiography, sans scholarly paraphernalia, readers learn quite a lot about the inner-workings of a flight research program and the human aspects of the pilots who labored on it. Some of those involved have become well-known figures in aerospace research and development circles, among them Scott Crossfield, Joe Engle, and the author. Moreover, pilot Neil Armstong, who also wrote a foreword for this volume, has become legendary because of his command of the Apollo 11 lunar landing mission.Thompson is especially strong in describing the human dimension of the X-15 effort, enlivening the narrative with both heroic and humorous anecdotes. Readers, for instance, get to go bar-hopping with some of the X-15 pilots and learn something about their concerns in flying an experimental aircraft. These vignettes are both entertaining and illuminating, and while "At the Edge of Space" has some of the elan and persona made so popular by Tom Wolfe in "The Right Stuff" (1979) there is more sense here that research pilots were only one part of a very large and complex team of individuals working on the X-15 project.Thompson also does a very goo

An Informative (and humorous) Thrill Ride

Published by Thriftbooks.com User , 20 years ago
Few people have heard of Milt Thompson, but those who follow the groundbreaking flight testing of the late 1940s through the early 1970s know of Milt and his (in)famous exploits. As both an amazing and experienced test pilot, having flown the X-15 and the wingless M2-F1 amongst others, as well as a dry-lake water(less)skier, Thompson lends his considerable insight and knowledge, as well as his sprightly sense of humor to this book.A truly fascinating read, this is one of very few books concerning the fastest powered manned aircraft program, the hypersonic X-15, which ultimately reached an unofficial record of Mach 6.7. Thompson, along with Scott Crossfield and Neil Armstron, amongst others, flew the X-15 in the early 1960s. This book does justice to the historic program, while maintaining the interest of even the most casual reader, which cannot be said of NASA's X-15 Mission Reports.This book is a must-read for anyone interested in the X-15 flight test program or those interested in the early X-plane projects, as is Thompson's "Flying Without Wings." Those looking for an exciting and engaging non-fiction read should also pick up "At the Edge of Space."

The Best Technical Book about the X-15 Rocket Plane !

Published by Thriftbooks.com User , 24 years ago
A technical focus is very important when you write about a experimental project like the X-15. Mr. Thompson wrote this book with some technical feel and all the experience of a test pilot and Systems Engineer. I like his description of the Ballistic Flight Control System and the transition from the Atmospheric flight to the Space flight and return. You can read the dialogs between the X-15 pilot and the B-52 pilots and the Chase planes pilots. In the case of Mike Adams flight, you can feel the moment of the tragedy. In resume, is the best X-15 Book and a apology to the X-15 project and all the people that work in it.

Published by Thriftbooks.com User , 24 years ago
Quick flowing narrative of Milton Thompson's experience in the X-15 program (he was both a pilot and a flight engineer). Excellent technical descriptions will give you the "feel" of the rocket plane and he shares his emotions about some of the test flights. Thompson includes a quick synopsis of all the flights and gives good details on the more interesting ones, filling in a lot of blanks with delightfully colorful anecdotes along the way. A must read for anyone interested in piloted aircraft that could cover 290 ground miles in under 11 minutes (Wow !!!). This book reads FAST and is full of good info
Trustpilot
Copyright © 2022 Thriftbooks.com Terms of Use | Privacy Policy | Do Not Sell My Personal Information | Accessibility Statement
ThriftBooks® and the ThriftBooks® logo are registered trademarks of Thrift Books Global, LLC