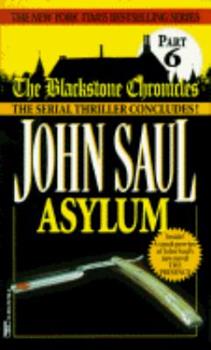 (Book #6 in the Blackstone Chronicles Series)

In the conclusion to the serial thriller by the popular horror writer, newspaperman Oliver Metcalf finds the key to the grisly horrors afflicting the New England town of Blackstone in a mysterious package that arrives on his doorstep. Original.

Sixth and Final Part in The Blackstone Chronicles

Published by Thriftbooks.com User , 18 years ago
"Asylum" wraps up The Blackstone Chronicles series with Oliver Metcalf's uncle, Harvey Connally, receiving a razor case that reveals the sources of tragedies occurring in Blackstone, New Hampshire--the item later resulting in Harvey's own death.Meanwhile, after being abducted in part 4, Rebecca Morrison is still being held captive and possibly next to die. The ending to "Asylum"--or, rather, Rebecca's lamebrained excuses for her abductor--was aggravating. But still, compared to Stephen King's prior six-part serial series, I prefer The Blackstone Chronicles much more, mainly because this series is more suspenseful and horror-filled than "The Green Mile."Though all six installments are sold separately--"An Eye for an Eye: The Doll" (#1), "Twist of Fate: The Locket" (#2), "Ashes to Ashes: The Dragon's Flame" (#3), "In the Shadow of Evil: The Handkerchief" (#4), "Day of Reckoning: The Stereoscope" (#5), and this one: "Asylum" (#6)--I'd recommend just buying the all-in-one novel; it's easier to read and less expensive that way.

Published by Thriftbooks.com User , 22 years ago
I suppose this explosive ending to The Blackstone Chronicles is essentially why I like John Saul's writing so much. The suspense in this story is built beautifully, and I was truly on the edge of my seat. The main character Oliver is now forced to face the reality of his dark past, and in the process finds healing and hope. After reading every Blackstone Chronicles, I was very satisfied with the ending.

Published by Thriftbooks.com User , 24 years ago
john saul is the most fear-fulfilling writer since king....in fact king he might have you beat.

This whole series was compelling.

Published by Thriftbooks.com User , 24 years ago
I thought Saul out wrote King's Green Mile which was a one note serial. Each episode had a full story--a beginning, middle and end. And the whole series held a full over-arching story. The madness in Blackstone was eerie enough and the stories were a ball to read. Best thing I've read in a long time!!!

Published by Thriftbooks.com User , 25 years ago
Part 6 is the thrilling conclusion to the Blackstone Chronicles, where an ancient evil plagues the small New England town of Blackstone, unleashing madness and grisly death. Now, in "ASYLUM", the town must confront the gruesom truth of the past - one that threatens to crush all the inhabitants of Blackstone in one final grip of terror
Trustpilot
Copyright © 2022 Thriftbooks.com Terms of Use | Privacy Policy | Do Not Sell My Personal Information | Cookie Preferences | Accessibility Statement
ThriftBooks® and the ThriftBooks® logo are registered trademarks of Thrift Books Global, LLC