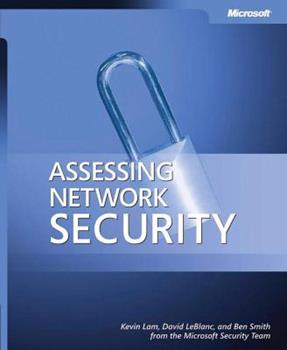 Don't wait for an attacker to find and exploit your security vulnerabilities--take the lead by assessing the state of your network's security. This book delivers advanced network testing strategies, including vulnerability scanning and penetration testing, from members of the Microsoft security teams. These real-world practitioners provide hands-on guidance on how to perform security assessments, uncover security vulnerabilities, and apply appropriate...

Published by Thriftbooks.com User , 14 years ago
I purchased this book a year and a half ago, after it was recommended to me, but didn't read it until now. Boy was I pleased to have picked it up, though. This was my first book on the practice of Penetration Testing, so the processes, methodologies and general underlying theories it presented were extremely valuable. In my day to day course as a Sys Admin, I found myself reanalyzing my network with newly gained perspectives. I found it to be very effective in turning the vague unknown threat into something visible and tangible -- instead of following what best practices I was aware of to create security, this book helped greatly in defining -why- those best practices created a secure front, and which would be more valuable to implement in my organization. I also echo the others, that it was fairly dry in general, but the sidebars and real life stories, quenching that dryness, has created a very strong fondness in my memory. All in all, I would highly recommend this to anyone, particularly if they're entering the world of security from a Microsoft background.

the ring of truth, the sound of experience

Published by Thriftbooks.com User , 17 years ago
Just the basic concept of this book is interesting. If anyone wanted to do a denial of service attack on my web site, or was really interested in coming in -- well, why would they care. But the Microsoft site, if you could bring it down you would certainly have bragging rights in certain circles. So if you really want to know about security, who better to read than people responsible for keeping the Microsoft site up and running. The book has four major sections: Planning and Performing Security assessments Penetration Testing for Nonintrusive Attacks Penetration Testing for Instrusive Attacks Security Assessment Case Studies. One thing I really appreciate in this book is the little stories from the real world. In between the description and tutorials (this is computer stuff, it's pretty dry) there are little notes of what really happened in a situation where this particular area was being tested. It gives the book the ring of truth, the sound of experience. Highly Recommended.

Published by Thriftbooks.com User , 17 years ago
Now, I've read some pretty bad books on penetration testing and nobody seemed to get this fun subject right! Good news - this time somebody did! This great tome ("Assessing Network Security") comes to us direct from the bunkers of Redmond. Written by three Microsoft security researchers, the book provides a great overview as well as in-depth coverage of assessing security via pen testing, scanning, IT audit and other means. The books starts from a nice overview of key principles of security (definitely not news for industry practitioners, but nice anyway), and then goes on to defines vulnerability assessment, penetration testing and security audit. A critically important section on reporting the findings is also nicely written and shows that the authors are knowledgeable about the subject. The book then goes into developing and maintaining the pentesting skills, and descends into choosing the training and resources (nice for those starting in the field). The actual pentesting process is split into non-intrusive (combining the usual "intelligence gathering" with port scans, sweeps and various host queries) and intrusive tests (such as running a vulnerability scanner, brute-forcing passwords, DoS testing and others). Some entries seem to belong in both categories (such as sniffing) but are placed into the intrusive section, for whatever reason. All the host latest content (wireless, Bluetooth and web assessments) is well represented in the book. A fairly insightful social engineering testing section (that touched on dumpster diving and other non-network assessment methods) is also present. My favorite chapter was the one on 'case studies' - examples of specific threats/tests against web, email, VPN and domain controller systems. Among other features that I liked were 'notes from the field' sidebars with fun stories related by authors and FAQs at the end of each section. On the down side, the book is somewhat Windows-focused (although it is amazingly vendor-neutral in most respects, considering the source). The book is also somewhat dry, although sidebars provide the needed relief when the text gets too process-oriented at times. The book is largely about methodology, but I'd have preferred to see a bit more technical content, since it is a 600-page volume. I think checklists, present in the Appendix, are a great step in that direction. Overall, I enjoyed the book and think it is both a great guide and a reference for most security professionals, especially for those starting to be involved with penetration testing. Anton Chuvakin, Ph.D., GCIA, GCIH is a Security Strategist with a major security information management company. He is the author of the book "Security Warrior" (O'Reilly, 2004) and a contributor to "Known Your Enemy II (AWL, 2004). His areas of infosec expertise include intrusion detection, UNIX security, forensics, honeypots, etc. In his spare time, he maintains his security portal info-secure.org
Trustpilot
Copyright © 2022 Thriftbooks.com Terms of Use | Privacy Policy | Do Not Sell My Personal Information | Accessibility Statement
ThriftBooks® and the ThriftBooks® logo are registered trademarks of Thrift Books Global, LLC