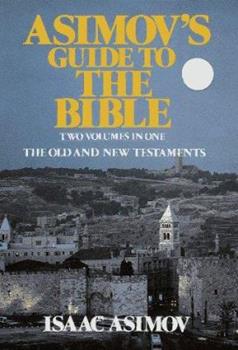 Asimov's Guide to the Bible: Two Volumes in One, the Old and New Testaments

(Part of the Aismov's Guide to the Bible Series)

Geographical and historical evidence illuminates the events and people of the Old and New Testament.

Published by Walter Ko , 8 months ago
It is fun to learn from this guide to Bible from Asimov without the religion zeal and conversion. He goes by clearly explaining the verse in historic setting so outsider of Christian culture has a better understanding of this important book. Christians do not have the exclusive and absolute truth. The late Wayne Dyer offers his understanding of the wisdom of Tao. This is a good companion of the Bible.

Published by Thriftbooks.com User , 15 years ago
Isaac Asimov normally writes science fiction or about science. So, why would he have written a whole book about the Bible? Especially when you factor in that Asimov was an avowed atheist. The short answer has to do with two things, 1. He wrote about whatever caught his interest, and 2. the Bible is read by a lot of people who think that it gives them then answers to all questions, including questions having to do with science. Basically, Asimov was trying to show that the bible was written with certain ideas in mind. It does not answer all the questions of the world, like some right wing ideologs like to think it does. His commentary on the bible also goes to show what a lot of things really meant. Like Shakespeare, the bible can be a little difficult to grasp in the beginning. Certain words have different meanings than they do in general use. Place names are sometimes different today, then when the various books of the bible were written. Asimov goes a long to explaining a lot of those things.

A must-read for thorough understanding of the Bible

Published by Thriftbooks.com User , 17 years ago
Asimov presents the Bible in a manner not often done; with historical insight. Think about it, to enjoy any great work, from the Divine Comedy to Less than Zero one has to understand the social / political environment the author was exposed to at the time of writing. The book is written from a secular perspective, so if you are looking for someone to beat the drum for your believe system, look elsewhere. That isn't to say that this book is not written for the faithful. Asimov does a good job of presenting the historical facts, and when delving into speculation, either his own of that of biblical scholars, he is sure to mention it. Reading this book will only enhance your biblical knowledge by giving you a better understanding of the Bible. Use it as a reference to formulate your own beliefs. I will say that I have fended off quite a few born again Christians who felt the need to align me with their belief system by using some of the facts and insight this book has given me.

Published by Thriftbooks.com User , 19 years ago
In terms of intellect, he could do almost anything and master it. He was the Voltaire of our time. And, still, his intent was to provide information that a thinking mind might utilize to make its own determinations. In this small aspect of his study, when he focused his considerable energy in this direction, his own words must express his motives:"Imagine the people who believe such things and who are not ashamed to ignore, totally, all the patient findings of thinking minds through all the centuries since the Bible was written. And it is these ignorant people, the most uneducated, the most unimaginative, the most unthinking among us, who would make themselves the guides and leaders of us all; who would force their feeble and childish beliefs on us; who would invade our schools and libraries and homes. I personally resent it bitterly..." -- Isaac Asimov, Canadian Atheists Newsletter, 1994

Published by Thriftbooks.com User , 21 years ago
This book is an excellent read if you are looking to learn more about the background of names, places, and events described in the Bible from a secular-historical standpoint. It doesn't pretend to be a work of original scholarship. It is what it's titled: a 'Guide' to the Old and New Testaments. Asimov emphasizes chronology and context, which gives the reader the sense that the things depicted as occurring in the various books of the Bible aren't just a collection of disconnected and discordant events. It is an extremely interesting history book in and of itself, and I learned more from it than from any other book about the Bible I've read of narrower topical scope. This was an ambitious project even for Isaac to attempt to tackle, and the range of his 'general overview' is as informative and fascinating as anything else he ever wrote.

Asimov brings his broad knowledge to this biblical review

Published by Thriftbooks.com User , 24 years ago
If you have an interest in understanding the historical background, religious and political motives, fulfilled and unfulfilled prophecies, and vague allusions concerning the events and characters which fill the Bible; this secular review contains a wealth of knowledge as well as being entertaining. Each book of the Jewish Bible and New Testament are covered as well as several non-canonical books. The evolution of contemporary Judaism and Christianity thought can be traced through the mythical stories of genesis, the Yawists of ancient Israel, the influence of Babylonian, Persian, and Greek beliefs as well as the Babylonian exile and Roman persecutions which inspired biblical apocalyptic writings. Great watershed events such as the invasion and conquest of Canaan by the Hebrew tribes, the establishment of the Davidic dynasty by Samuel, the splitting of the Israel/Judah confederacy due to Solomon's policies in building the first temple, the conquest of Israel by the Assyrians, the conquest of Judah and destruction of the first temple by the Babylonians, the return from the Babylonian exile and construction of the second temple, the destruction of the second temple by the Romans, the life and crucifixion of Jesus, and the establishment of the Christian religion through Paul's efforts are all covered in this 1200+ page tome. Asimov's book reads like a historical novel which is more readable and easier to understand than reading the bible cold. After reading through this book, I feel confident in engaging my Christian and Jewish friends in discussions about the bible and in most cases, am more knowledgeable about their holy book than they are.
Copyright © 2020 Thriftbooks.com Terms of Use | Privacy Policy | Do Not Sell My Personal Information | Accessibility Statement
ThriftBooks® and the ThriftBooks® logo are registered trademarks of Thrift Books Global, LLC