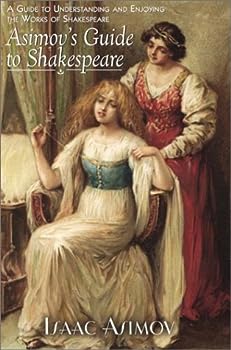 Asimov's Guide to Shakespeare: A Guide to Understanding and Enjoying the Works of Shakespeare

by Isaac Asimov and Rafael Palacios

This description may be from another edition of this product. Examines the historical, geographical, and mythological background of the plays and two narrative poems.

A Joy To Read

Published by Thriftbooks.com User , 15 years ago
This book is 100% analysis and comments, it contains no works. For that you need another book as a reference as you read this present book. Of all the Shakespeare analysis books, this is book by Asimov is one of the best books available, and very reader friendly and entertaining. Here is the analogy. Your hobby is Shakespeare and you have just won the lottery. You have decided to quit your day job, shun the world, sit down, and go over every one of Shakespeare's plays, dissect each scene in chronological order, find out where the characters' names came from, how the plot relates to original source stories such as the myth of King Lear, etc. You research such facts - as they might be available - on whether Shakespeare really did invent the plot of the Tempest all on his own, or as Asimov thinks perhaps it was based on a boat crash in Bermuda. You would go on and on... looking at all the interesting details and side notes plus you would find some maps and drawings. Then - possibly five years later - you would take all the notes, hire Tom Clancy or some other well known modern novel writer and together you would write this easy to read 750 page reference book. Perhaps you could sell a few copies. That would be your labour of love, and that it exactly what we have here. Asimov has taken the time to methodically go through all the major works, divide them into three groups, i.e.: Roman-Greek and ancient tales, Italian-Mediterranean more modern tales, and finally the English-Europe stories starting with King Lear. He does not need a writer's help - he brings that to the table. Each play is treated in a short chapter and gets about 20 to 40 pages of analysis, general source comments, and specific comments on a few key lines. He has all the skills needed to keep our attention, make it simple, give us lots of background trivia plus the key guidance, and make it all entertaining. I think most would agree that the best book on Shakespeare is the 3500 page monster: The Norton Shakespeare. But the present book is friendlier and at 750 pages easier to read. So this is an excellent reference where one can get a very fast and painless summary of all the works with many interesting details on lines and characters scene by scene without feeling lost or overwhelmed - as sometimes happens with Norton - a book that one can barely lift. Asimov's book is a must buy for most Shakespeare lovers even if you own other books. Simply put this book is a joy to read, an integral part of any Shakespeare library or fine on its own. Asimov spent all that time and made a serious effort, and now we can enjoy it for a few dollars.

Published by Thriftbooks.com User , 16 years ago
While watching or reading one of Shakespeare's plays, it's interesting to read the notes of some of the different critics. Peter Levi does a wonderful job following the poetry and language of Shakespeare as it develops over his lifetime, in the context of the other writers of his era. Harold Bloom, of course, finds in Shakespeare both a mirror and an impulse for a leap forward in literature and therefore in society. Bloom has fallen in love with certain of Shakespeare's characters (Falstaff, Hamlet, etc.) and uses them as a yardstick for all others. Asimov takes a more historical view. He has done impressive research into the characters and times. His "Guide to Shakespeare" is useful for its insights into all of the plays, but I found it most useful for the English histories. In the eight plays of the Wars of the Roses --from Richard II, through the Henrys, and culminating in Richard III-- Asimov tracks the family trees and politics of the nobility, spots anachronisms, and does a wonderful job of simplifying the sometimes bewildering array of characters and historical references. Of course, even uneducated audiences in Shakespeare's day would have understood some of these arcane references without a guidebook, much as a modern US audience would easily understand references to Thomas Jefferson or Abraham Lincoln. With his research and clear writing, Asimov brings the history plays --and indeed all of the plays-- back to life.

Accessible to scholars and novices alike

Published by Thriftbooks.com User , 20 years ago
When I first saw Asimov's Guide to Shakespeare in a bargain book section of a local bookstore, I was a bit surprised that Asimov had a guide to Shakespeare. I decided to pick it up because it was on sale and read his entries on some plays that I have read.I didn't know what to expect, but after reading a few pages into it, I was hooked. Asimov, with amazing astuteness, has given a thorough analysis of twenty three of Shakespeare's plays and the poems Venus and Adonis and the Rape of Lucrece. At the beginning of every play he has a map of all the locations pertinent to the play. I found this to be very helpful in understanding the varied settings in Shakespeare's plays.The chapters on the plays read a bit like something you might find in Monarch or Cliffs notes. He goes through the tale and gives pertinent information along the way. However this book isn't merely a substitute for reading Shakespeare, nor is the aim of it to prepare you for an exam. Rather this book's aim is to guide the modern reader, who is distanced by time and geography from Shakespeare's stories, along to better understand Shakespeare.If you're looking for a down-to-Earth book on Shakespeare, this is it. No one, quite as well as Asimov does, can make the reader feel so at ease in reading the fancy language of Shakespeare.

Shakespeare for anyone and everyone

Published by Thriftbooks.com User , 21 years ago
Asimov's guide might seem to be a large volume, but is relatively small, considering the amount of information and knowledge stored within. Asimov effortlessly takes any reader of Shakespeare, whether novice or expert, through the histories, tragedies, and comedies in order to reveal small plot intricacies, character motivation, and background that may be unknown to the bard's audience. Asimov expresses his own feelings freely, a reason that I am sure many people have ranked this book lower than a 5, but I maintaint the superior rating because any and all of the authors feelings are sufficiently backed, even if not universally accepted. For example, I do not feel that Hamlet's primary motivation is the crown of Denmark, but Asimov feels as such and backs his thoughts, a style that is to be commended and considered. I learned a great deal from the book, especially customs prevalent in the Elizabethan period that are not practiced in the modern world. The explanation of these customs is a priceless companion to any reader. Asimov's astonishingly in depth/easily read work is a must for anyone that has a wish to understand Shakespeare either a lot more, or just a little.

For the novice as well as knowledgeable scholar of the Bard.

Published by Thriftbooks.com User , 22 years ago
I bought my old edition of Asimov's Guide to Shakespeare at the Southern Oregon Shakespearean Festival bookstore some twenty years ago. I have used the text to prepare my neices, nephews, and grandchildren for their first experiences with live performances of the tragedies, comedies, and romances performed by the Ashland repertory company. Asimov's narrative includes just enough Shakespearean diaglogue to allow the novice playgoer a glimpse of the richness of language, wit, and perception contained in each play. That glimpse is all my young pupils needed to attend (in all senses of that word) their first plays at age 10 and to keep attending these twenty years. And Asimov's insightful interpretation of each play has kept me reading him as well as the Bard as I prepare to introduce a second generation of children to great threatre. I am ordering a new copy of the book, as my old one has been worn out.
Copyright © 2020 Thriftbooks.com Terms of Use | Privacy Policy | Do Not Sell My Personal Information | Accessibility Statement
ThriftBooks® and the ThriftBooks® logo are registered trademarks of Thrift Books Global, LLC