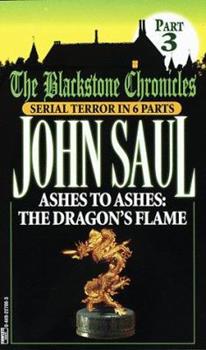 (Book #3 in the Blackstone Chronicles Series)

In the third of a six-part serial horror saga, Rebecca Morrison purchases the perfect welcome home gift for her cousin Andrea, an exotic cigarette lighter in the form of a dragon, a gift that inflames the darkest passions of the human heart. Original.

"You have to stop it before it kills us all."

Published by Thriftbooks.com User , 16 years ago
The citizens of Blackstone, N.H., do not realize that a "dark figure" has returned to the old Blackstone Asylum, long closed, and has found the trove of personal articles once belonging to the inmates. With a need to wreak vengeance on certain people in the town, he starts giving out some of these old objects, then watches as people's lives are changed forever, each "gift" leading to a tale of horror. This is the third volume in the Saul's Blackstone Chronicles, and the "dark figure" is about to bestow the third object. (No spoilers.) Rebecca Morrison, a young woman who has suffered minor brain damage after a terrible accident, is living with her aunt, Martha Ward, a religious fanatic. When Martha's alienated daughter Andrea returns home to live, pregnant and abandoned by her boyfriend, Rebecca unwittingly sets in motion the events which the "dark figure" has planned. While on a trip to the local Flea Market with Oliver Metcalf, editor of the local newspaper, Rebecca finds and buys a gold cigarette lighter with red eyes, the "perfect present" for her cousin Andrea, a present which changes all their lives. In this volume, Rebecca comes closer to being a real character than are the main characters of Saul's previous novels, allowing the reader to empathize with her, to some extent. Her friend Oliver Metcalf, who ties together all the novels, also grows as the reader gains additional knowledge of him and the town and begins to feel as if real people, rather than cardboard cutouts, inhabit this community. The Gothic horror continues, with the kind of over-the-top melodrama and clichéd action that makes horror novels fun to read--entertaining, rather than terrifying. Here the religious fanaticism of Aunt Martha Ward and her ultimate fate begin to suggest that Saul will further develop this series into a confrontation between God and the devil, rather than simply an accumulation of gory horror stories. The story moves quickly when the dragon-lighter is introduced into the lives of the characters, and the author offers broader hints than usual about the reasons that a particular character has been chosen as a gift recipient. n Mary Whipple

Different yet the Same

Published by Thriftbooks.com User , 21 years ago
Once again, the basic plot line in "The Dragon's Flame" is almost identical to the first two installments. The main character is Rebecca, a quiet, friendly young woman who lives her strict aunt. When Rebecca's rebellious cousin comes home, chaos mounts. This extremely dysfunctional family makes the story very interesting, and difficult to put down.

Published by Thriftbooks.com User , 21 years ago
I have read the entire installment of the Blackstone chronicles but this one stands out the most. Sweet simple minded Rebecca is pleased when her cousin has decided to return to live with her fanatical mother. A well-meaning Rebecca buys her a fancy lighter at a flea market, but like the other objects from the Asylum it carries a deadly curse. The whole series pulls you and gets you involved it is reminiscent of the old series Friday the 13th, definately one you won't want to miss

Published by Thriftbooks.com User , 24 years ago
The story is starting to grow on me. Although sometimes I get the feeling I'm reading the screanplay to Creepshow or Tales from the Crypt. Rebbeca is definitely my favorite character in this series. Her character is well defined and multi faceted. I'm actually getting interested about how he is going to decide to finish this

Another excellent work by John Saul!

Published by Thriftbooks.com User , 24 years ago
If you haven't read the first 2 parts of "The Blackstone Chronicles", please do so! You'll understand this review better! In this third part, Rebecca Morrison, niece of the eccentric Martha Ward, goes to the town flea market with Oliver Metcalf, the newspaper editor, who has been trying to find out about the asylum's past, and has witnessed a gruesome sight at the end of Part 2. While at the flea market, Rebecca finds a beautiful, ornate cigarette lighter in the shape of a dragon's head. She buys it for her cousin, Andrea, who is coming home to Blackstone, after being thrown out by her boyfriend and becoming pregnant. As is expected, she and her mother, Martha, clash, but not until the story has been established. I can't say much more without giving away the plot, but I can say, it follows the lines of the previous parts, and leads you a little closer to discovering what is going on in Blackstone. Pick this up, and enjoy
Copyright © 2022 Thriftbooks.com Terms of Use | Privacy Policy | Do Not Sell My Personal Information | Accessibility Statement
ThriftBooks® and the ThriftBooks® logo are registered trademarks of Thrift Books Global, LLC