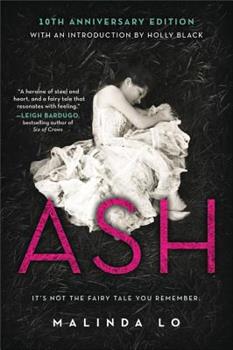 The haunting, romantic lesbian retelling of Cinderella and modern queer classic by award-winning author Malinda Lo -- now with an introduction by Holly Black, a letter from the author, a Q&A, and more In the wake of her father's death, Ash is left at the mercy of her cruel stepmother. Consumed with grief, her only joy comes by the light of the dying hearth fire, rereading the fairy tales her mother once told her. In her dreams, someday the fairies...

Published by Thriftbooks.com User , 12 years ago
Aisling, who goes by Ash in this book, loses her mother at a young age. If her mother had lived, Ash would have learned of fairies and the ways of the greenwitch. Her father didn't believe in such things and neither did her step-mother, closing the door on that path. After her father's death, Ash lost her place as daughter and was moved into the servant's quarters to pay off his debt. Her only solace was the woods, but she wasn't really alone. Sidhean, opened up a new world, that of the fairies. She also met Kaisa, the King's Huntress, who opened her heart to love. Told in a Cinderella theme, this isn't your boy/girl young adult love story, but a love that develops between Aisling and Kaisa. In my opinion, ASH is a book long overdue.

Published by Thriftbooks.com User , 12 years ago
I really love re-tellings of classic fairy tales if they are done well, and this is my favorite since Pamela Dean's Tam Lin. Ash is the Cinderella in the story, and all the elements are there. Magic, fairies, a wicked selfish stepmother, and a Prince who only figures into the story for a moment. It's a coming of age story, as Ash, who is alone and orphaned makes friends with a fairy who is fascinated with her for reasons she can't understand and with the Royal Huntress. Her step-mother makes her life miserable and she has her moments of escape and love with her friends until she can finally stand for herself and make the choices to make her life better. The descriptions are lush, and the dialogue is easy and comfortable. The romance in the story is something that builds naturally out of friendship instead of the big crush/fall in love that's entirely too common in YA romance type novels. I'm highly recommending it to my daughter to read now that I've finished devouring it in less than an evening. It did grab me that hard, that I didn't want to put it down until I was done reading it.

Published by Thriftbooks.com User , 12 years ago
This retelling of the Cinderella tale is beautifully written, rich in folklore and gorgeous language of the woods, and wonderfully fresh. Ash, orphaned as a young teen, is tempted to give up on human life and follow the glittering fairy she meets in the woods to see her mother once more. With a life of servitude to her stepmother and stepsisters, what reason does she have to live? Enter the King's huntress - a strong, beautiful, independent young woman who teaches Ash to ride and helps her to find the answers she's been seeking. This book is a beautiful, beautiful retelling with a twist that reminds us that love comes in different shape and sizes and genders - not always in the form of a prince. For teachers & librarians: Hand this book to anyone who loves a great fairy tale retelling, but especially to GLBT and questioning students who don't see representations of themselves in fantasy literature often enough. The GLBT themes aren't the focus of this book, though - the power of finding true love is, and that's what makes it even more magical for all kinds of readers.
Copyright © 2020 Thriftbooks.com Terms of Use | Privacy Policy | Do Not Sell My Personal Information | Accessibility Statement
ThriftBooks® and the ThriftBooks® logo are registered trademarks of Thrift Books Global, LLC