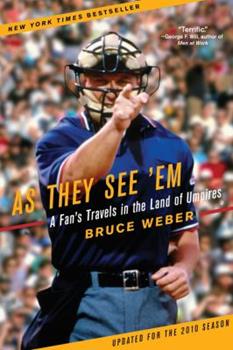 As They See 'em: A Fan's Travels in the Land of Umpires

Millions of American baseball fans know, with absolute certainty, that umpires are simply overpaid galoots who are doing an easy job badly. Millions of American baseball fans are wrong. As They See 'Em is an insider's look at the largely unknown world of professional umpires, the small group of men (and the very occasional woman) who make sure America's favorite pastime is conducted in a manner that is clean, crisp, and true. Bruce Weber, a New York...

Weber Hit It On the Head

Published by Thriftbooks.com User , 12 years ago
As an amateur umpire interested in the history and inner workings of professional umpiring I have read everything written about and by umpires. Weber's book is more than just a bunch of old umpires telling war stories. He delves into the inner sanctum of the profession. Extremely well researched book. He has talked to all of the living people he needed to talk to other than Bud Selig, who doesn't have time for umpires. I attended the same umpire school as Weber several years prior, and was also the oldest student in class. His description of the day to day activities of umpire school are right on. He takes you on the "long road" from the minor leagues to the majors and documents the hardships of that road with a professional writers expertise. More importantly, he tells the story of the men who are the best in the world at what they do, how under appreciated they are and what a thankless job they have. This book is a MUST reading for anyone considering a career in umpiring as well as the fan who hasn't given much thought to the men in blue (or I guess black today).

Published by Thriftbooks.com User , 12 years ago
Weber has done an excellent job in this reportage piece on baseball umpires. I would rank Weber right up there with other fine literary writers of baseball lore, such as Will, Bissinger and Leavy. His own experiences at umpiring school were artfully described in an entertaining manner. I also enjoyed his reviews of some of the major umpiring controversies from Union squabbles to historical on-field screwups, e.g. the Denkinger gaffe in the '85 Series. I would have appreciated more in-depth personal information about some of the great umps of our time but, as the author made clear, many of that profession are loathe to speak openly to anyone, let alone, the Press, about their game. What personal information Weber could glean was insightful and edifying to those of us who never need to go to a day's work and have participants chanting a type of death threat!

Helps me understand a game I love even more

Published by Thriftbooks.com User , 12 years ago
I'm an old baseball fan--I remember the year Williams hit .406 and Joltin' Joe hit in 56 straight. In several recent big league games where I now live (Nationals Park, DC) I have enjoyed watching the umpires from time to time--understanding much better than I did before reading this book what they are doing and why they are doing it--they are an important part of the game. I personally think they deserve more respect--they sure don't get much from the people they work for. A very interesting book.

Published by Thriftbooks.com User , 13 years ago
I have followed baseball closely for over five decades, yet, paradoxically, have never particularly thought about the umpires. They are just there, more or less invisible until they make a controversial call. Yes, I've enjoyed the varied styles of plate umpires and how they call strikes. But it's never crossed my mind how incredibly difficult and technical their jobs are. Weber does a magnificent job of explicating the details of the umpire's job. I guess I understood the principle that being in the right position to make a call is crucial, but I've never worked through the details of how the right position is determined, and how the umpiring crew (anywhere from 2 to 6, depending on the level of the teams and the time of year) coordinates all of this. It comes across in Weber's account as almost like a dance as the umpires rotate into position to cover the various contingencies based on the game circumstance (runners, number of outs) and, crucially, where the ball is hit. In the era of slow-mo instant replay, it's all the more incredible to me how often the umpires get their calls right. Yes, there are famous gaffes (e.g., Denkinger's call in game 6 of the 85 World Series between the Cardinals and Royals). But under a kind of scrutiny that I don't think any of the rest of us could endure, they are mostly right, even in the toughest of situations. I also had not understood very well the path from minor league to major league umpiring. It's a long and frustrating path, and there are only a tiny number who make it. Attending umpire school is almost mandatory (and Weber goes to school, and gives us a great account). It takes on the order of a decade in the minor leagues to even get a chance, and even then, few are chosen. While currently the pay for major league umpires is pretty good (six figures, with $400,000 range for the most senior), the pay and benefits in the minor leagues are incredibly poor. Yet hundreds of eager candidates endure the low pay, the poor food and lodging, the amazingly long drives, to pursue the chance. As a baseball fan, I'm glad there are such dedicated folks. The antagonism between baseball's management and the umpires was a surprise to me. I would have thought that the umpires would have been seen by management as their agents, and therefore be highly respected. On the contrary. Some executives see umpires as being the equivalent of bases, needed to play the game but nothing deserving of respect. Weber goes into considerable detail about the 1999 labor disaster for umpires, when a wave of resignations as a labor action backfired, and a number of highly qualified umpires lost their jobs (some eventually got them back), and a legacy of resentment and ill-feelings resulted. And of course the fans. "Kill the ump" is a long-standing fan chant, and as Weber shows, has actually led to death threats against umps who have made controversial calls. While I don't recall ever using this chant myself, I do know that I've ragged

Published by Thriftbooks.com User , 13 years ago
For starters, I have personally never before issued a five-star rating to a non-fiction work, saving those for the Grishams and Browns of the literary world (pedestrian, I realize). I could not, however, pass up the opportunity to do so on this occasion. As a typical fan, there is only so much that I care to know about the umpires' side of the baseball equation (just as Weber depicts in the book). Thus, it was with a bit of hesitation that I ordered this volume. I had to take a deep breath when, early on, Weber delved into the history of umpiring and even the origin of the word. I was thinking "boy, this is not going to go well." I am happy to report that, due to Weber's research and writing style, I not only survived the history lesson but thoroughly enjoyed it as well. Weber grabbed me right from the opening pages, taking a mundane topic (the umpire's cap), and turning it into an enjoyable narrative delivered in an amusing and colorful way. Already, I loved this guy's humor and repeated self-flagellation. Throughout the book, Weber shares stories of all levels of umpires and the job itself. While it is clear that he respects the job that umpires do and, in most cases, the umpires themselves, this is not a gushing, starry-eyed love story. The reader is treated to warts and all. Especially interesting to me, having never thought about it or been aware of it, is the consistently contentious relationship between the umpires and management, be it in the majors or throughout the minor league system. As a diehard fan, I cannot imagine myself ever feeling sympathetic towards the umps, but I am so glad that I now know more about how they got to where they are, and some of the things that they have to deal with it that most of us don't see. Much to my chagrin, I do now have more appreciation for those who survived "chasing the dream" (schooling and the minors) and are now in the bigs. While the job looks easy from the stands and the couch, I now know that I could not and would not have survived the life. Weber also does a fine job illustrating how umpires go about their responsibilities on the field, posing great questions that made me stop and think about all the games I've attended. Frankly, I was shocked at the number of variables mentioned that I had never before picked up on. Having read this book, I am looking forward to the start of the season even more, and plan to pay significantly more attention to what the umpires do and how they go about their business. Oh, want to be humbled? Weber points out some inconsistencies in the rulebook and some rules that I have to believe most fans are entirely unaware of. In fact, on two occasions my eyes opened so wide that I put the book down and checked the rules myself, so as to ensure that Weber had not taken a few too many foul balls to the temple during his time at umpiring school. I had not heard of Weber before reading this book, but he has me hooked. His writing style makes for
Trustpilot
Copyright © 2022 Thriftbooks.com Terms of Use | Privacy Policy | Do Not Sell My Personal Information | Accessibility Statement
ThriftBooks® and the ThriftBooks® logo are registered trademarks of Thrift Books Global, LLC