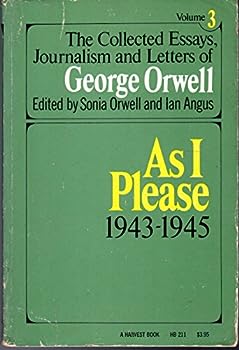 This description may be from another edition of this product. Essays, journalism and essays by the brilliant, indispensable George Orwell from 1943 to 1945. Even many decades after his death, the more we read of Orwell, the more clearly we can think about our...

Published by Thriftbooks.com User , 13 years ago
George Orwell' (1903-1950)anthology titled AS I PLEASE is an interesting collection of his careful literary criticism and political insights which were much more often right than wrong. Readers can learn so much about not only the situation and conditions in Great Britian between 1943 and 1945, they can learn much about the international situtation and Orwell's complete disillusionment with the "Left" both in Great Britain and in Europe. This reviewer thinks that Orwell's literary criticism of Arthur Koestler is the best article of literary criticism. Orwell focused on Koester's DARKNESS AT NOON which Orwell thought was Koestler's best work. Orwell argued that Koestler was a supporter of the "Left" during the Spanish Civil War and was arrested and faced the prospect of being shot. Koeslter escaped but had to know how the Stalinists betrayed the Spanish Left during the Spanish Civil War. Koestler was a member of the Hungarian Communist Party, knew of the Stalinist purges of Lenin's Bolsheviks, and saw a repeat of all this in Spain. Orwell also had intelligent commentary of literature and humor. Orwell stated that good humor had all but disappeared in Great Britian because of political and religious sensitivity. Orwell stated that the best comedy was that which attacked hypocrisy and pretensioness. Orwell cited Aristophanes, Rabelais, Shakespear,Voltaire, etc. who did not hestitate to mock and write comedy of the self righteous and "high and mighty." Orwell was bothered by the fact that such humor almost disappeared from English litature during his life time. An interesting aside is that Orwell complimented Hillaire Belloc and G.K. Chesterton for their humor. Orwell was critical of both in some of the other essays in this anthology. Orwell not only wrote good literary criticism, he wrote solid political commentary. Readers can see the beginnings of his best known novels-ANIMAL FARM and 1984. Orwell's comments on ill feeling between British and American troops. Orwell stated that since American troops were paid at least five times as much as British troops, social divisions and hard feelings were almost inevitable. Orwell also commented that many American troops refused to admit that British casualties were larger than American casualties which indeed they were. Orwell's best political commentary dealt with such concepts as Fascism, Pacifism, the Trotskyites, the Stalinists, etc. Orwell's major criticism of the "Leftists" was that because they were anti-Fascist, they would not become anti-totalitarian because of refusal to oppose the Stalinists and Big Communism and its obvious record of mass murder and concentration camp brutality. Orwell makes hash out of the accusation that the Internatianl Jews heavilty subsidized Britian's Trotskyites. Orwell commented if that were true, one had to ask why Trotsky's supporters were always so poor. Orwell accused much of the "Left" of refusing to accept facts and assessments of World War II. For example, man

Published by Thriftbooks.com User , 17 years ago
I don't know if George Orwell is the best writer this century has produced, but he is among the most decent human beings who was also an extremely talented writer. And that decency, that honesty and sense of fair play come through loud and clear through this wonderful mix of editorial pieces and personal letters. It does not matter whether he is writing about the Socialist movement, the Monarchy, the manner in which Americans were treated in England during WWII, the English language, writing, colonialism, nationalism, anti-Semitism, or how to make a proper cup of tea, his honesty is ever-present. For he wrote these essays (I think) because although "emotional urges which are inescapable, and are perhaps even necessary to political action, [they] should be able to exist side-by-side with reality. But this requires a moral effort." If you are prepared to make such a moral effort-or simply want to spend a few nights with a truly wonderful human being and gifted writer, I highly recommend this book.

I think Orwell does the world well

Published by Thriftbooks.com User , 17 years ago
While the recently published one-volume Essays is a worthy surrogate, nothing will beat this four volume collection. I like this volume because I enjoy the "As I Please" columns very much. Too bad that they no longer publish the book in a hardbound edition. Since the purchaser of this volume is likely to be familiar with Orwell to some degree, I won't preach to the choir. I can't remember anything I disliked. A few details about the book, there is an index, you'll find a mix of Orwell's letters, essays on diverse topics, and As I Please weekly columns during the war years. An excerpt from that column illustrates Orwell's sobering humor (I hope the copyright people don't get me):"When Sir Walter Raleigh was imprisoned in the Tower of London, he occupied himself with writing a history of the world. He hand finished the first volume and was at work on the second when there was a scuffle between some workmen beneath the window of his cell, and one of the men was killed. In spite of diligent enquiries, and in spite of the fact that he had actually seen the thing happen, Sir Walter was never able to discover what the quarrel was about: whereupon, so it is said - and if the story is not true it certainly ought to be - he burned what he had written and abandoned his project." Now, Orwell shares this anecdote because he wants to make the point that "even as late as the last war (WWI) it was possible" to ascertain some degree of truth about what's going on in the world, for instance, casualty figures, because sources could be verified by cross-referencing. Orwell complains/observes, however, that in WWII "a Nazi and a non-Nazi version of the present war would have no resemblance to one another, and which of them finally gets into the history books will be decided not by evidential methods but on the battlefield."You see the journalist and perennially honest (and somewhat bitter) truth-seeker here?

Orwell: As He Pleased

Published by Thriftbooks.com User , 20 years ago
In my humble estimation Orwell was, by far, the best writer of the 20th century. Overflowing with compassion for all humanity, Orwell wrote about events happening in his life as if he were reflecting on them years later. His perception of the world was so keen and his analytical senses were so acute, we are blessed to have his best writings available to us in this 4 volume set.Volume 3, I believe, is the best of this collection because it contains the bulk of the weekly, As I Please, that ran in the "Tribune" magazine from 1943-1945. This is some of his best freelance writing covering a whole range of topics. They capture the essence of his thoughts politically and socially. Here too you gain a view of life in WW2 Britain: rationing, blackouts, air raids, and, more importantly, how it felt to live through it.I would reccomend you buy all 4 volumes and start at the beginning. You will not regret the experience.

An Excellent Introduction to Orwell's Non-Fiction

Published by Thriftbooks.com User , 21 years ago
This book contains some of Orwell's best essays, including "A Hanging" and "Shooting an Elephant", which describe his experiences as a policeman in Burma in the twenties, and "Inside the Whale", in which he discusses Henry Miller's "Tropic of Cancer" and other literature of the thirties. You can browse through it and discover what Orwell thought about poverty in England, the Spanish Civil War, fascism in Europe, the lead-up to the second world war, and lighter subjects such as what boys' comics were like at the time. The numerous letters to friends and colleagues provide a fascinating glimpse into Orwell's private life and his views on a wide range of subjects.
Copyright © 2020 Thriftbooks.com Terms of Use | Privacy Policy | Do Not Sell My Personal Information | Accessibility Statement
ThriftBooks® and the ThriftBooks® logo are registered trademarks of Thrift Books Global, LLC