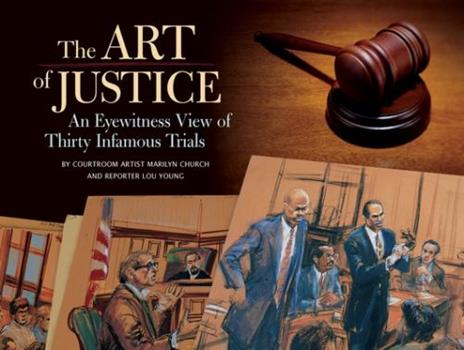 The Art of Justice

by Marilyn Church and Lou Young

As the principal courtroom sketch artist for the New York Times and WABC in New York, Marilyn Church covered many of America's most infamous trials, from the downfall of John Gotti to the trial of would-be presidential assassin John Hinckley; from the conviction of Martha Stewart to the Sean "Puffy" Combs weapons possession trial. In The Art of Justice , Marilyn Church takes readers into the courtroom for an insider's view of thirty sensational cases...

A courtside seat to history, one that has the advantage of post-trial hindsight

Published by Thriftbooks.com User , 15 years ago
The Art of Justice is much, much more than its subtitle ("An Eyewitness View of Thirty Infamous Trials") lets on. The thirty criminal trials in this gorgeous large-format book span the decades from the 1970's to the present. Courtroom scenes are portrayed in striking full-color sketches, accompanied by an objective narrative about the indictment, evidence, courtroom atmosphere, media coverage, and American cultural pulse. I actually hesitated about picking up the book, because I envisioned it as an art piece, and while it is most certainly artistic, the book is also about the American collective memory, the changing face of true crime coverage over the course of three decades, the meaning of celebrity, and the indelible personal impressions of people who were present in these courtrooms as journalists and sketch artists. The impressions of courtroom artist Marilyn Church take this book to the next level. She writes about the hilarious scene created when Marla Maples's pilfered stockings and high heels were displayed in courtroom trial of her stalker: "I had fun pulling them into the center of the drawing, emphasizing the bizarre scene of footwear spilling everywhere." Most other scenes have a more somber tone, such as the judge's order for all artists to stow their drawing supplies when the Central Park Jogger rape victim was on the stand. Chruch also provides insight into the stony, vacant manner of Preppie Murderer Robert Chambers; he chilled her to the bone because her own children could have easily been his peers and friends, at risk from this cold sociopath. Church's career spans all the significant trials of the last thirty decades, from the modern celebrity trials of Sean "Puffy" Combs and Martha Stewart, to the Fall of the Teflon Don, John Gotti, to famous crimes by The Long Island Lolita and The Son of Sam. Yes, O.J. is here, too. Church was commissioned to create courtroom sketches for the trial precisely because every other media source had full-color glossy images from live video and photo, and one magazine wanted something to set themselves apart--what better than a good, old-fashioned full-color sketch? As someone who was raised on the O.J. trial, I enjoyed this book as a history lesson. I was in junior high for the first World Trade Center attacks (1993), and it most affected me because my class trip to New York city was cancelled as a result. With a decade-plus of hindsight, and having lived as a NY resident through the 2001 attacks, I had an entirely different perspective on the event and trial, and the narrative at hand provided much-needed insight into jihad in America in the early 1990's. This is truly a courtside seat to history, one that has the advantage of post-trial hindsight, so that stories can be told in full detail, with all the post-verdict developments. I enjoyed this as a history lesson, as an exploration of the criminal trials I grew up on, and as a poignant perspective on the changing face of cri

Published by Thriftbooks.com User , 15 years ago
I have to admit up front that I know both authors. They are colleagues from our time together at WABC-TV's Eyewitness News back in the early 1980's. 25 years later, I was surprised and excited to hear they had gotten together to write this book, and I'm even more surprised now to see how much fun it is to read. Growing up, I was a big fan of the "Justice Story" that ran every Sunday in New York's Daily News, and this book is like a collection of many of those great tales. From important cases to sensational crimes to the kind of celebrity insanity that exists in the hometown of "Page Six," the book is a great trip down memory lane. Lou writes insightful, colorful and clear brief stories for each case covered in the book. Marilyn's art is beautifully presented and we get fascinating "behind the scenes" stories about how courtroom artists work and what they experience as they focus on major and minor criminals through the years. It is entertaining and breezy, both serious and fun. The kind of book that's easy to pick up and enjoy in ten-minute bursts or while hanging out for hours. It is also unique-- nothing like it has been done and you close the covers knowing like you have learned something while fulfilling your nostalgic needs.
Copyright © 2022 Thriftbooks.com Terms of Use | Privacy Policy | Do Not Sell My Personal Information | Accessibility Statement
ThriftBooks® and the ThriftBooks® logo are registered trademarks of Thrift Books Global, LLC