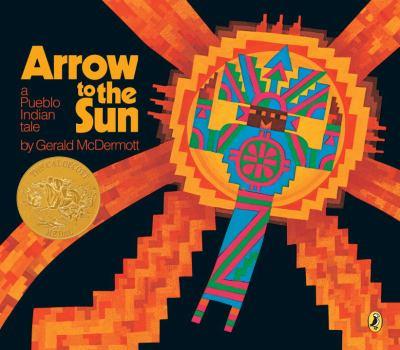 Arrow to the Sun: A Pueblo Indian Tale

With vibrant colors and bold geometric forms, Gerald McDermott brilliantly captures the stylized look of Pueblo Indian art in this Caldecott Award-winning retelling of an ancient legend. A young boy searches for his father, but before he can claim his heritage he must first prove his worthiness by passing through the four ceremonial chambers- the kiva of lions, the kiva of snakes, the kiva of bees, and the kiva of lightning. Striking in its simplicity...

as good as i remember

Published by Thriftbooks.com User , 19 years ago
My mother read this book to me when I was a child, and I remember loving it, but hadn't seen it in probably 15 years until I bought it for my nephew. It is as good as I remember.I can attest to the fact that the high contrast, brightly colored drawings are mesmerizing for a small child. The best part of the book is when the boy must complete four tasks for the sun god to prove himself. The tasks are not narrated, you get to see how the tasks are completed from how the drawings change. It's so cool! I felt very smart as a little kid being able to discover what he did and figure it our for myself.On a cultural note, the narrative is similar to the Christ story. Mother gives birth to the boy (a virgin birth) after the sun god sends a ray of energy to her. The boy grows up and wants to know who his father is, and goes on a quest to find him and prove that he is indeed the son of the sun god. (That's why he becomes an arrow to the sun!)I think it's good for a child to be exposed to this story to begin to understand the universal elements of religion and that all cultures have a lot in common. Even those that seem strange are not so different from our own.

Creation, Quest, and Spreading the Spirit in Fabulous Images

Published by Thriftbooks.com User , 21 years ago
The story here is a Native American Pueblo tale. It begins when "Long ago the Lord of the Sun sent the spark of life to earth." "It traveled down the rays of the sun, through the heavens, and it came to the Pueblo." "There it entered the home of a young maiden." "In this way, the Boy came into the world of men." Growing up alone with his mother, the boy is derided by the other boys. "Where is your father?" Finally, the boy could take it no more. He left to find his father. The Corn Planter and the Pot Maker could not help him. But the wise Arrow Maker could. The Arrow Maker made the boy into an arrow and shot him into the sun. The boy claimed to be the son of the Lord of the Sun, but the Lord of the Sun demanded proof. Tests were involved, but the boy was not afraid. He successfully went through the four kivas of lions, serpents, bees and lightning. After the kiva of lightning, he was transformed and was filled with the "power of the sun." The father and his son rejoiced.The Lord of the Sun said, "Now you must return to earth, my son, and bring my spirit to the world of men." He was sent back as an arrow. "The people celebrated his return in the Dance of Life." As you can see, this story is a very conceptual one that deals with spiritual matters involving cultural traditions that are probably unfamiliar to your child. The book will be easier to understand if you explain a little about the religious beliefs of the Pueblo Native Americans before reading this book to your child. You will also need to explain the point about how not having a father present can create a stir. The arrow transfers can be explained as magic, and the search itself can be likened to a quest of the sort that knights often undertook. The spiritual connection can be explained in terms of your own religious beliefs or tradition.The story is also a metaphor for the planting cycle, as well as the cycle of life and death. The key reason to read this book is to see some of the most remarkable modern renderings ever created of classic southwestern Native American pictograms. These pictograms are built from stylized geometric components combined into other geometric forms in a palette built mostly from yellow, orange, red, brown, and black. As accents, turquoise and green are added. These images are created with gouache (a thick form of water color) and preseparated black lines. These geometric shapes take literal beings and turn them into spiritual, conceptual ones. If you are like me, the transformation of the boy into the power of the rainbow against a sky of black will take your breath away. Not surprisingly, this book won Mr. McDermott the coveted Caldecott Medal in 1975 as the best illustrated children's book. After you finish enjoying the story of the book, I suggest that you also help your child understand some of the legends of other peoples in other times about planting and harvesting, as well as the manhood tests. If you are not familiar w

Published by Thriftbooks.com User , 23 years ago
Arrow to the sun is a fascinating story of a boy's trials to find the answer to a question. A skill you can emphasize with your reader is to retell the series of trials. Questioning during the telling of a story also reinforces comprehenhsion: What was the boy in search of? Why did the boy become an arrow? What other story can you think of where a character must go through trials to prove him or herself? Who are the Pueblo people? This last question will lead to a study of other Native American cultures and folktales. Teachers: run with this! Use this story as a springboard to the study of the Anasazi,LaKota,Aztec,or Mayan.

Published by Thriftbooks.com User , 23 years ago
This children's book is based on an old Pueblo Indian tale about a boy who is son of the Sun and who wishes to meet his father. He is shaped into an arrow and shot towards the Sun. He meets several tests and his father has him return to Earth to teach man of the Sun's spirit. The book won the 1975 Caldecott Medal for best illustrations in a book for children. Children will love the story and the colors of the book have a great appeal.

Published by Thriftbooks.com User , 24 years ago
This book captured the eye of my 3-year old and his daycare friends as soon as it was opened for the first time. The colors are full and rich, with emphasis on orange and black contrasts and there's even a vivid rainbow at the end. The story is easy to follow and your child can create his/or her own sounds for the four Kivas described within (Kiva of Lions, Serpents, Bees and Lighting!). One of George McDermott's best; highly recommended.
Trustpilot
Copyright © 2022 Thriftbooks.com Terms of Use | Privacy Policy | Do Not Sell or Share My Personal Information | Accessibility Statement
ThriftBooks® and the ThriftBooks® logo are registered trademarks of Thrift Books Global, LLC