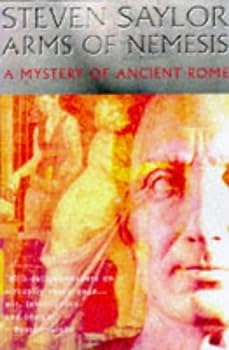 This description may be from another edition of this product. The hideously disfigured body was found in the atrium. The only clues are a blood-soaked cloak, and, carved into the stone at the corpse's feet, the word Sparta . The murdered man was the overseer of...

Published by Thriftbooks.com User , 17 years ago
Arms of Nemesis is a very good historical mystery novel. The history and mystery aspects flow together very well. There is also plenty of suspense.More importantly, there is real suspense in this novel. Additionally, the detective finds the clues in a consistently realistic manner. No fakey revelations here.This is important because this is the very first novel by Steven Saylor that I've found that lived up to the reputation that he has had as an excellent writer of historical mystery novels. The other novels by Saylor that I've read thus far have either been middling quality works such as Murder on the Appian Way or really dreadful expositions such as his most recent novel, The Judgment of Caesar. Arms of Nemesis is an excellent historical, mystery and suspense novel. If you have a need for some good escape reading, this is a novel that you should seriously consider.

Published by Thriftbooks.com User , 17 years ago
Saylor's second novel in his Roma Sub Rosa series is surely a triumphant return after Roman Blood. I enjoyed the read through each plot twist and mysterious event. Saylor does an excellent job at elucidating each characters' motifs, points of view, and inner schemings. I especially liked the insight into the characters like Marcus Crassus, Mummius, and Faustus Fabius. Previously, these characters seemed almost mythic because they had been built up by hearsay and history; never before had I taken the time to examine the scale of their personal and political problems. In addition, the novel is very urbane and progressive although it is set two thousand years ago. The day to day interaction between characters, as well as the social acceptance of things like affairs, homosexuality, and immoral acts for the greater good. I would recommend this novel, as well as all of Saylor's other novels (especially The House of The Vestals) to anyone who likes to read for entertainment and enjoys mystery.

Much better than I expected

Published by Thriftbooks.com User , 19 years ago
The other "Roman mysteries" I've read are by Lindsey Davis, books I can't say that I really like for several reasons. But this book, the first I read from Steven W. Saylor gives me hope that there are good mysteries set in a fairly historically accurate Rome afterall. My first summer class I'm teaching will be reading this this early June and we'll talk about the historical and social realities behind the book. I'm glad I took the risk of buying this book. I look forward to reading more Saylor books, especially those with Gordianus whose detective skills seem to fit well into the late Republican period of Rome. Little seemed strained or "modern" not even the attitudes toward slavery which were, even then, a mixture and varied from person to person, class to class.

Published by Thriftbooks.com User , 20 years ago
This is a book about character mostly. Saylor has written one of the most impressive novels I have read lately. Period. Forget that it is a mystery; forget that it is an impressive, thoroughly researched, history treatise. Reader beware for this is a true masterpiece. Even though there are passages where you'll feel you are suffering yourself, you won't want to put it down. The backdrop of this particular story is the revolt of Spartacus, which makes the issue of slavery the central point of the book. Although it is not moralizing, there are passages in the book that will bring you, the reader, close to tears. Gordianus is summoned to investigate the brutal murder of one of Crassus's administrators at one of his many villas at the countryside. He is taken there by ship; and here is when one of the many gory descriptions of ancient slavery takes place: with the rowers at the bottom of the "Fury" - the actual name of an imposing ship. Throughout the story Gordianus takes almost a frantic approach to save the lives of many slaves, although, being a roman citizen himself, he doesn't understand really why. The story is so trascendental, one can understand why Gordianus, in the next book, his own family established with Bethesda, decides to retire to the country. He could hardly imagine what Saylor had in store for him in future adventures!

This novel will tear at the conscience of the reader.

Published by Thriftbooks.com User , 25 years ago
If you are tempted to glorify the empire of Ancient Rome, you won't be after reading this novel. A sense of urgency pervades the book, from the moment Gordinius is hustled aboard a ship to visit an estate in the south of Rome to the very end when Gordinius is brought news of the fate of those he met. The primary plot of Arms of Nemesis focuses on the fate of a few -- those slaves who will all be killed unless the murderer of the master is found. Its backdrop is the great slave revolt led by Spartacus and romanticized by the silver screen. Gordinius struggles on a personal level with the concept of slavery and how it affects him as a Roman citizen. The choices he makes are personal, yet Saylor never attempts to impose modern values on this ancient detective. The decisions he makes are within the context of his current morality and philosophy. While many of his contemporaries tell Gordinius he is wasting his time to save the lives of these hapless slaves, he still pursues justice for both slave and master. Saylor reveals the relationships between masters and slaves and how even the kindest of relationships can have bitter endings for both parties. while solving the mystery, Gordinius learns more about the cults found among the women of Rome and in doing so, teaches much to the reader. "Arms of Nemesis is a book well worth reading, and one that will haunt the reader's heart and conscience for a long time to come.
Copyright © 2020 Thriftbooks.com Terms of Use | Privacy Policy | Do Not Sell My Personal Information | Accessibility Statement
ThriftBooks® and the ThriftBooks® logo are registered trademarks of Thrift Books Global, LLC