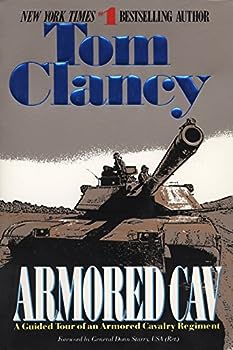 (Part of the Guided Tour Series)

This description may be from another edition of this product. A penetrating look inside an armored cavalry regiment -- the technology, the strategies, and the people . . . profiled by Tom Clancy. His first non-fiction book, Submarine , captured the reality of...

Published by Thriftbooks.com User , 21 years ago
Its hard to compress more information in one small book than Clancy has done in Armored Cav, if you want to quibble with details write your own book and do better! Clancy has to take what he's been given and make an educated opinion of things to say what he has to say. He is wrong about the M551 Sheridan and the BFV for example, but that's ok, he has no direct personal experience. This is a good REFERENCE book to quickly educate whoever it is you are teaching, which includes America's Soldiers who are still taught by rote memorization their specific tools and not the context of the modern battlefield--Clancy expresses the heavy fight here better than anyone so far. This is a fight with an armor versus firepower versus mobility struggle at its core, and its equipment driven. His biggest failing is not starting with the tracked tank in WWI and progressing through to Vietnam and giving us the historical context of Cavalry and how light tanks and tracked APCs in the jungles of Southeast Asia rumbled all over the countryside and trounced the enemy with light casualties. He avoids this controversy seeking instead to "plant the seeds" of a lighter, more rapidly deployable air-cavalry by describing the M8 "Buford" Armored Gun System as a replacement for the M551 Sheridan light tank, and conveniently not mentioning the latter was parachute airdropped into combat by the 3/73d Armor BN attached to the 82d Airborne Division for Panama. He then doesn't even mention the M8 in Airborne!, his other non-fiction U.S. Army book. This is a serious oversight. Clearly, Clancy knows the Armored Cav he is writing about is too heavy to rapidly deploy and he is trying to "nudge" it in the right direction without the 2-D tanker-mentality realizing it will have to fly in aircraft and parachute jump and have a negative knee-jerk reaction. But by not describing how U.S. armored vehicles were inferior in some ways to German tanks in WWII, Clancy fails to explain why we went overboard with the M1/M2-M3 families, creating the not-enough armor inferiority complex which drives many in Armor branch which has made the force too heavy to move and irrelevent in a world that moves by air. However the "silver lining" in this "cloud", is that Clancy explains how the Armored Cav is a mini-combined arms team; with almost all the elements of combat power and if he had the history covered up front (easy to do---get Iron Chariots author Ralph Zumbro and add to the beginning) he could have shown that this combined-arms organization came out of WWII mechanized cavalry experiences when we had to fight for our reconnaissance. Clancy needs to mention briefly how the 1st Cavalry Division was once a helicopter Air Cavalry Division and what went wrong in Vietnam and why it reverted back to a heavy formation. If you pay attention you will see that Major MacGregor was the S-3 for the Desert Storm armored fight described--he is now Colonel Douglas MacGregor whose

A persuasive argument for a strong Armored Cavalry.

Published by Thriftbooks.com User , 22 years ago
If the folks in Washington who set the defense budget and determine how much money is to be allocated for army ordnance and materiel were to read this book, I think it would help clarify for them why exactly we need to maintain a strong armored cavalry to support our U.S. ground forces. We have grown too complacent if we believe that all security threats can be resolved by simply launching missiles from the sea or dropping bombs from the air, hoping to cow the enemy into submission by sustained and heavy bombardment. There comes a time when the surgical excision of a belligerent element or hostile force is more necesary and, in the long run, more effective and beneficial, both economically and politically. But such action requires a powerful wall of mobile armor to ensure that the men and women participating in any such operation are defended by the best MBT's and IFV's that money can buy. Tom Clancy descibes in magnificent detail some of these vehicles, and gives examples of the hardware in action against Soviet-made tanks during Operation Desert Storm. The book also includes informative interviews with some of the outstanding individuals who've helped raise the army to the standard it is today, and who hope to keep those forces strong through the next millenium. It is a sobering book and especially relevant at this time.

Another great book from Tom Clancy

Published by Thriftbooks.com User , 23 years ago
Anyone who has an interest in the army, with at least some interest in how heavy divisions are used, should read this book. If you enjoyed reading some of Tom Clancy's other books ("Fighter Wing","Into the Storm",etc) you are sure to enjoy this one. It is a must read for army enthusiasts

Clancy establishes the core of being an Armored Cav Trooper.

Published by Thriftbooks.com User , 24 years ago
As a former "Brave Rifle" who served with this unit in the late '60s and early '70s, Clancy accurately portrays life in the 3d Armored Cav unit. I found his style brought back to me ALL the thoughts, feelings and memories of those days. I felt I was still leading my platoon thur the land of Ft. Lewis, WA. Mr. Clancy painted a pictures that was precise, truthful, and described the experience of Troppers who worked hard at what they did to serve our country

Published by Thriftbooks.com User , 24 years ago
This book takes us all in for a closer look of America's Arm. Cavalry units. Once poised to watch over the Rhine, unit's like the 2nd ACR-L and the 3rd ACR, now constitute part of America's rapid reaction element. Included in this book are reviews of the AH-64 Apache, M1A2 Abrams, M109A6 Palladin, and a lot more. It also includes a detailed TO & E of the Arm. Cav from platoon to regimental level. Unfortunately the author didn't put in enough detail on unit logistical support, but who cares it still makes you wish you were American. Thanks Clancy for a great book
Copyright © 2020 Thriftbooks.com Terms of Use | Privacy Policy | Do Not Sell My Personal Information | Accessibility Statement
ThriftBooks® and the ThriftBooks® logo are registered trademarks of Thrift Books Global, LLC