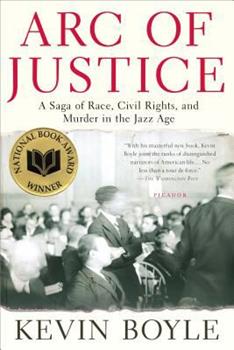 Arc of Justice: A Saga of Race, Civil Rights, and Murder in the Jazz Age

An electrifying story of the sensational murder trial that divided a city and ignited the civil rights struggle In 1925, Detroit was a smoky swirl of jazz and speakeasies, assembly lines and fistfights. The advent of automobiles had brought workers from around the globe to compete for manufacturing jobs, and tensions often flared with the KKK in ascendance and violence rising. Ossian Sweet, a proud Negro doctor-grandson of a slave-had made the long...

Is the Arc of Justice the Correct Metaphor for this Story?

Published by Thriftbooks.com User , 13 years ago
Given the state of American justice since 1925 (at least for black Americans) one can reasonably argue that the metaphor "the Arc of justice," is an inaccurate one. It inaccurately suggests that with Dr. Ossian Sweet's acquittal, justice had begun to bend in the right direction, if not had entirely come full circle. This, in my view, is at best a premature conclusion to draw based on a single case, and at the very least, an exaggeration of what was to come as racial justice in the era that followed. To wit: Although the book glamorizes the brief period of racial integration during the Jazz age and the rich and vibrant culture of the Harlem Renaissance, in 1925 the U.S. throughout, including most of the south, as far north as New York, and as far West as East St. Louis, Ill, was effectively under mob rule, with the invisible government of the KKK presiding as the dominant political force across the national landscape. Even as late as 1933, we had at least one Supreme Court Justice who was still a member of the KKK, and even as late as 1945, the much-revered Franklin Delano Roosevelt and Harry S. Truman both had refused to sign an anti-lynching Bill. But more to the point of the author's metaphor, "the arc of justice," the bulk of the 5000 lynchings of mostly black men took place between 1901 and 1925. Police brutality against mostly black males, which was rampant then, continues (with racial profiling and the Draconian cocaine laws) almost unabated even today. Plus, there are today more than one million black men in American prisons, which rather incredibly is four times as many as Communist China (which has four times the U.S. population). This number just happens to be exactly one-eighth of all prisoners in the whole world! Add to this the additional statistic of "one in four blacks in jail," which is exactly the same percentage that were in jail in Mississippi in the immediate aftermath of the Civil war (when blacks were "picked up" and sent to jail on almost any trumped up pretext so as to make it easier to reinstall them into quasi-slavery through "work-release programs" and as "wage-less workers" for their previous masters, and these facts would suggest that (again at least for black men), the "arc of justice" has not bent very much in the right direction since 1925. I am a fan of this book, not because of the misappropriated metaphor in the title, or even just because it is so carefully and brilliantly crafted, but also because of the savage honesty which underlies an expertly told story. And it is this honesty that breaks the code for anyone willing to see it, as to why there was so much white violence in the U.S. during the period of Dr. Ossian Sweet's trial and why that violence (even in its more sublimated form) remains very much the subtext of American society today, 88 years later. The meat of this story thus, is not the trial conducted and won by the notorious and brilliant lawyer, Clarence Darrow per se, which is the story's cli

Published by Thriftbooks.com User , 17 years ago
Kevin Boyle, in Arc of Justice, is very adept at creating a picture of a particular time and place, Detroit in the 1920s, that was the creation of the era that came before it and the harbinger of times to come. In 1925 a man, Ossian Sweet, is on trial for defending his property after moving into a white neighbourhood and he is defended by one of the most controversial men of his times, Clarence Darrow, but within this story are many strands stretching all across the country entangling many other vivid (and vividly portrayed) personalities. The author is amazingly effective in bringing into focus this complex story and the reader will be gripped by this true tale as both the KKK and the NAACP drift by. It is an intense, powerful read that shows, in many ways, how we got to where we are and how we have not gone as far as was once dreamed. That could be just some of Clarence Darrow's pessimism creeping in but it is hard not to be gripped by any encounter with that man, partiularly as well done as the one in this book. A very good piece of history.

A riveting true story of the nascent Civil Rights Movement.

Published by Thriftbooks.com User , 17 years ago
Kevin Boyle, a history professor, and National Book Award-winning author of "Arc of Justice: A Saga of Civil Rights, and Murder in the Jazz Age," has written the best true crime book I have ever read, including Truman Capote's "In Cold Blood." A Detroit native, Boyle tells one of the city's most important civil rights episodes - the September night in 1925 when black people took up arms to defend their home from a white mob. His narrative of the sensational murder trial, which ignited the Civil Rights Movement, is electrifying! Boyle's research is meticulous. He interweaves the incidents leading up to the murder, the police investigation, and the courtroom drama of the trial, with history that documents the volatile America of the 1920's. He re-creates the Sweet family's inspirational journey from slavery through the Great Migration to the middle class. "Arc Of Justice" reads like a suspense thriller! I was riveted to the page. I thought I was relatively well informed about the Civil Rights Movement. However, I was amazed at how little I did know, especially about the period before the mid-1950's. I learned so much from this book about the significant and fascinating history of the Great Migration and many of the events which took place afterwards, especially in the North during the 1920's. "I have always been interested in the colored people. I had lived in America because I wanted to...The ancestors of the Negroes came here because they were captured in Africa and brought to America in slave ships, and had been obliged to toil for three hundred years without reward. When they were finally freed from slavery they were lynched in court and out of court, and driven into mean, squalid outskirts and shanties because they were black....I realize that defending Negroes, even in the North, was no boy's job, although boys were usually given the responsibility." With these words, Attorney Clarence Darrow, a civil libertarian, best known for defending John T. Scopes in the so-called "Monkey Trial," agreed to act as co-defense counsel for Dr. and Mrs. Ossian Sweet, as well as two of the doctor's brothers, Otis and Henry Sweet and seven of their friends and colleagues. They were all accused of conspiracy to commit murder, and murder in the first degree. The young, upright Sweet family's real crime was to buy a bungalow in a previously all-white working class neighborhood in Detroit, and move into their home, on September 8, 1925. A few friends and relatives helped them make the move and volunteered to remain with the family in case of trouble. When rumors circulated of the purchase of the house on Garland Ave. by a Negro family, a new neighborhood improvement association was quickly formed. The newly appointed secretary arranged for a meeting to be held in the local school auditorium. The crowd of middle class whites attending overflowed the large room. This new organization was one of many neighborhood associations established across America, at that

Published by Thriftbooks.com User , 18 years ago
In the afterward to his brilliant and captivating "Arc of Justice," the story of a pivotal but largely forgotten incident in America's Civil Rights movement in 1925 Detroit, historian Kevin Boyle writes that segregation is so "deeply entrenched" in this country that it can't be uprooted. Even today, he writes, black and white neighborhoods across the United States are "separated by enduring discriminatory practices, racial fears and hatreds, and the casual acceptance by too many people that there is no problem to address." It's a stunning statement to many, no doubt, yet surprising in its obliqueness: a century of lynchings and race riots following the Civil War are over, having taken a full hundred years to slow to a crawl and then die. But many vestiges of discrimination remain. Because the practice has continued, many of us give no pause to the one singular thriving aspect the black/white conflict, that of racial segregation in our cities and towns. Residential segregation continues to go unchecked because, from the comfort of our living rooms and our front porches, we continue to proudly (but blindly) proclaim that - as some citizens of Detroit in 1925 proclaimed - we harbor no prejudices. Boyle's meticulous research delves into that problem - the intersection of prejudice and the marketplace and the role that force plays in maintaining the color line, particularly with respect to restrictive covenants in real estate - by examining the story of Ossian and Gladys Sweet, a black doctor and his wife who purchased a home in a white neighborhood in Detroit in the simmering summer of 1925. The second night in their new residence, some 600 men, women and children ignored the presence of a half-dozen policemen there to protect the Sweets and began to barrage the two-story house with stones, shattering its windows and walls and the fragile psyche of the frightened Sweets and the eight friends there to help protect them from the onslaught they knew was coming. Before the night was over, shots were fired from the Sweets' new residence. One neighbor was killed and another wounded. "Arc of Justice" is the story of that night and its aftermath, particularly focusing on the trial of the Sweets and their eight companions on the charge of murder. It is equal parts history lesson, biography, courtroom drama and legal textbook, and takes the reader into the intense struggle of the working black in America during a time and place when America never seemed to work harder - in the 1920s in a lower- to middle-class, fast-growing city. It details the unique set of circumstances that would combine to create a scenario where four score Detroit factory workers, wives and other neighbors would, without reservation, conspire together under the guise of "neighborhood improvement" to oust the unwelcome visitors by any means necessary - and then to blatantly lie about it in court. It also tells the story of how the NAACP (the National Association for the Advancement of Colo

Published by Thriftbooks.com User , 18 years ago
Arc of Justice is a superbly crafted book, such good reading that it is hard to put it down. On top of that, the author, a member of the History Department at Ohio State University, is a real scholar, careful with his facts, well-grounded in the scholarly literature of American history, and--this is especially noteworthy--able to show the reader how the story of Ossian Sweet has a larger significance. In sum, treat yourself to a great read! If this book does not get the most serious consideration possible for the Pulitzer and Bancroft prizes, then there is no justice in this world
Trustpilot
Copyright © 2022 Thriftbooks.com Terms of Use | Privacy Policy | Do Not Sell My Personal Information | Cookie Preferences | Accessibility Statement
ThriftBooks® and the ThriftBooks® logo are registered trademarks of Thrift Books Global, LLC