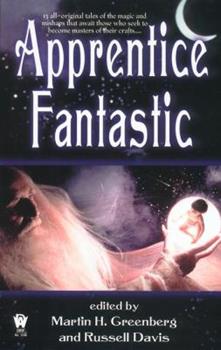 The apprentice is one of fantasy's most often identified with characters, someone who is all too human, sometimes a source of humor, sometimes that one special person who will become the catalyst for pivotal events, sometimes a villain, sometimes a hero, perhaps most often a loyal sidekick. From the poignant tale of a young girl learning to "paint" the future to a young man who "apprentices" himself to the devil, here are unforgettable portraits of...

13 tales - only some involve magicians' apprentices

Published by Thriftbooks.com User , 19 years ago
Mostly well done; the others are noted as I come to them. Bischoff, David: "The Sorcerer's Apprentice's Apprentice" Coarse, elderly Vincemole Whiteviper, apprentice to the dishonest adventurer Sir Harry Springraff, is narrating his memoirs to his own much-abused apprentice: how he lost what little fourteen-year-old innocence he had on a quest for a suspect wizard's treasury. The plan was for Vincey to seduce Relfalyn, the wizard's beautiful 18-year-old apprentice. Funny how things work out...The physical setting reminds me of an AD & D-based computer game. de Lint, Charles: "Sign Here" Unusual style: entirely dialogue, without even "he/she said", 4 characters (2 appear only once), only 2 characters per scene. A stranger in a bar offered Peter enlightenment regarding the structure of the world - magic - if he'll sign over his soul. Peter's friend Robert employs unusual tactics to try to free him. The dialogue suffers from *too* much realism. Friesner, Esther: "Homework" Parody by someone who's read the Evil Overlord checklist. Prince Gallantine is having trouble with his captor Morbidius, who's finally wised up. Then Morby's nine-year-old nephew Andy, seeking to avoid his villain apprenticeship homework, turns up. :) Helfers, John: "Blood and Scale" A wizard's apprentice, offered only death as an alternative, agrees to become the apprentice of the dragon who wiped out the rest of his party. Hoyt, Sarah A.: "The Muses' Darling" Shakespeare, as a young struggling playwright, is an apprentice to the meteoric brilliance of Kit Marlowe. This story takes Marlowe's treatment of Faust as having a personal application. I also recommend Neil Gaiman's quite different treatment of Marlowe and Shakespeare in SANDMAN, a subplot starting with "Men of Good Fortune" in THE DOLL'S HOUSE. Huff, Tanya: "When the Student Is Ready" Oddly enough, *this*, rather than de Lint's contribution, is an urban fantasy set in Canada (Toronto, not Ottawa, though). Sixteen-year-old Isabel has been encountering a mysterious street person a lot lately - but is it just poverty and homelessness that seems to cloak him in invisibility? (Even complete with smart-aleck talking crow.) Levine, David D.: "Zauberschrift" is the complex, legalistic Latin in which spells are written, instructions for the immensely powerful but mindless daemons (spirits) forming the basis of a wizard's magic. (The author's note says he based this story on his first summer job; he must have been a programmer. The analogy between the magic system and programming is interesting without being heavy-handed.) The protagonist quit his wizard apprenticeship when he inherited the family dye business on the deaths of his father and older brothers, but his native village has asked for his help after his old master's death. The weather spells that have protected the village for years have been corrupted, and no affordable wizard can be brought in to fix the problem. Lindskold, Jane: "Final Exam" Narrated by Danny Ba
Copyright © 2022 Thriftbooks.com Terms of Use | Privacy Policy | Do Not Sell My Personal Information | Accessibility Statement
ThriftBooks® and the ThriftBooks® logo are registered trademarks of Thrift Books Global, LLC