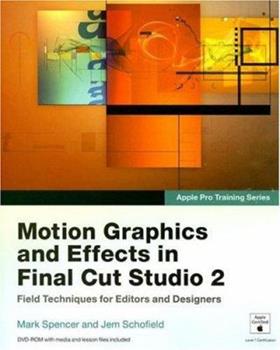 by Mark Spencer and Jem Schofield

Final Cut Studio 2, Apple's suite of innovative digital video products, enables anyone to make edits to a DV project, trim footage, produce an audio soundtrack, and deliver the finished project as a polished DVD. But in the highly specialized broadcast TV, video, and film industry, many editors who use Final Cut Studio just need to focus on specific production tasks in their daily work. This practical, focused book explains how to create motion graphics...

Published by Thriftbooks.com User , 12 years ago
I got my book right on time... I am very happy with my book thank you...

This really worked for me

Published by Thriftbooks.com User , 13 years ago
I highly recommend this series. It was very detailed and helped me learn how to effectively use Final Cut Pro. I enjoyed it too.

Another solid showing from Mark Spencer

Published by Thriftbooks.com User , 13 years ago
Very helpful, especially in the later chapters. I've bought plenty of books and video tutorials from all kind of sources as I tried to teach myself Motion 3, and this book was one of the more helpful. As someone who is an editor/director looking to expand into motion graphics, I found myself adapting much more easily to the world & interface of Motion than After Effects. I always kind of regretted that though, because AE is much more robust (given that it's been around for so much longer than Motion), but this book (specifically chapter 14) really started to show off more of the 3D paint strokes & 3D camera moves that I usually associated with AE. Once you learn the little tricks that are actually useful, you'll stop underestimating Motion 3. Mark Spencer's video tutorials from MacPro Video also helped a lot (especially the 3D cube one with the audio behaviors).

Gets you up & Running

Published by Thriftbooks.com User , 14 years ago
I am not a fan of the "paint by numbers" method of learning from books. Miss a step and it's over. However, this one has been pretty good and has supplied me with useful information to get me up and running with Final cut studio 2. As you would expect, this book leanes heavily towards "Motion 3" but hey! that's mainly why you are interested in it! Of note is something of an introduction to "Live Type" that more than hints at what this somewhat eclipsed application can do. I do wish the Apple manuals were available for purchase though. Four Stars (loses one for being "paint by numbers")

A Fast Way To Get Up And Running

Published by Thriftbooks.com User , 14 years ago
After using Adobe's Premiere and After Effects for a number of years, I finally decided to switch to Final Cut Studio 2. Whilst editing methods in Final Cut Studio were pretty much the same, I wanted to unlock the hidden gems that I knew FCS2 had under the hood. I've been a fan of Peachpit Press' releases so I didn't hesitate to stock up on the Final Cut Studio 2 series. Of all the titles in this category, "Apple Pro Training Series: Motion Graphics and Effects in Final Cut Studio 2" was the first to arrive in the mail. Each lesson is fun and takes you through the new features and quickly gets you familiar with the power of the software. This is a perfect book for anyone new to Apple's mammoth A/V suite and also for those that wish to become certified without attending classes. Using this book series, you can take the Apple Certified Pro Level 1 exams (for Level 2, you will need to attend actual classroom courses). To get the most from this book, set aside the time needed for each lesson, don't rush them as you could miss a vital step or even a useful side note (I learned from this mistake) and keep it to one lesson per day to maximize retention. Highly recommended for those getting started out in Final Cut Studio 2 and want to get working on projects quickly.
Trustpilot
Copyright © 2022 Thriftbooks.com Terms of Use | Privacy Policy | Do Not Sell My Personal Information | Accessibility Statement
ThriftBooks® and the ThriftBooks® logo are registered trademarks of Thrift Books Global, LLC