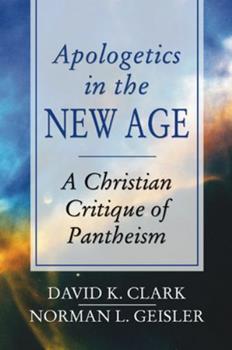 Apologetics in the New Age: A Christian Critique of Pantheism

Many books have successfully defended Christianity against Western rational skepticism. 'Apologetics in the New Age' represents the first serious attempt by evangelical philosophers to answer Eastern pantheism in general and the New Age movement in particular. Teaming up with David Clark, Norman Geisler, one of evangelicalism's leading apologists, probes the pantheistic worldview and its relationship to the New Age movement. Pantheism, the authors...

Published by Thriftbooks.com User , 13 years ago
It's a Christian perspective on Pantheism and since, like a business, every religion wants to be the one that you go along with, it's focus is on primarily what's wrong with the idea of pantheism and what's not wrong with the idea of Christianity. Although I agree with alot of the things that this book finds wrong with Pantheism I do not necessarily agree that Christianity is the correct ideal, philosophy, religion by default.

Published by Thriftbooks.com User , 21 years ago
This book, unfortunately, went out of print rather quickly. This was probably because of its specialized and intellectually-advanced treatment of an otherwise popular subject: The New Age Movement (NAM). The same thing happened to another valuable Christian book on the NAM by Tom Snyder called "Myth Conceptions: Joseph Campbell and the New Age" (Baker Books, 1995). The target audience for both books was Christian, but most Christians seem to prefer the more popular and less-specialized treatments on the subject. For those Christians, however, who want to exercise their minds with good, critical analysis of some of the principal intellectual influences on the NAM, then there is no better place to begin than with "Apologetics in the New Age," provided that you can find a copy. After a general introduction to the topic and its importance, Part 1 expounds the thought of some of the primary historical roots (including those within the last century) that influenced the NAM. The first three thinkers (Suzuki, Shankara, and Radhakrishnan) are Eastern whereas the last two (Plotinus and Spinoza) are Western. Suzuki (1870 - 1966) is known for his key role in introducing Zen Buddhism to the West. Shankara (c. 788 - c. 820) and Radhakrishnan (1888 - 1975), on the other hand, were Hindu thinkers. Plotinus (A.D. 205 - 270) was a Greek philosopher whose influence was profound. As our authors point out, Christian theology felt the effects of his work through Augustine and, by way of Proclus, through an unknown monk known as Pseudo-Dionysius the Areopagite. Pseudo-Dionysius, because he was mistaken as the convert of Paul (Acts 17:34), has had a pervasive influence on medieval works of theology and devotion (mysticism). For further exposition on the thought and influence of Plotinus and Pseudo-Dionysius, see Bernard McGinn's "The Foundations of Mysticism". I must also add, since the authors don't, that Plotinus had a significant influence on Jewish Kabbalah (see Isaiah Tishby's The Wisdom of the Zohar, Volume 1, pg. 237). Kabbalah is highly regarded by occultists (and the NAM in general). Occult orders of the late 19th century such as The Theosophical Society and The Hermetic Order of the Golden Dawn utilized, with modification, its doctrines. Spinoza (1634 - 1677), a philosopher of Jewish descent, is known for his pantheistic naturalism with its anti-supernatural bias. The authors point out that Einstein said he believed in the God of Spinoza and both thinkers shared the belief that whatever happens in Nature happens by necessity. Part 2 (Evaluation of New Age Pantheism) opens with Chapter 6 which "summarizes pantheism's common threads" and "ties together similar themes in pantheism and shows how these ideas manifest themselves in the thought of typical New Age advocates" (pg. 13). These themes are fleshed out and analyzed in Chapters 7 - 10. I particularly liked the authors' seven "presumably exhaustive" logical alternatives regarding evil
Trustpilot
Copyright © 2022 Thriftbooks.com Terms of Use | Privacy Policy | Do Not Sell My Personal Information | Accessibility Statement
ThriftBooks® and the ThriftBooks® logo are registered trademarks of Thrift Books Global, LLC