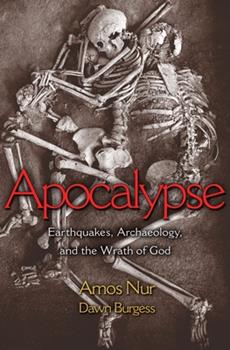 Apocalypse: Earthquakes, Archaeology, and the Wrath of God

by Amos Nur and Dawn Burgess

What if Troy was not destroyed in the epic battle immortalized by Homer? What if many legendary cities of the ancient world did not meet their ends through war and conquest as archaeologists and historians believe, but in fact were laid waste by a force of nature so catastrophic that religions and legends describe it as the wrath of god? Apocalypse brings the latest scientific evidence to bear on biblical accounts, mythology, and the archaeological...

Much needed book in dialogue between archaeologiy and geology

Published by Thriftbooks.com User , 12 years ago
Nur's book opens a much-needed dialogue between geology and archaeology regarding earthquakes. The book's value lies not only in its clarity and the logic of his suggested explanations but in the multiplicity of archaeological sites he presents where earthquakes and seismic activity are already long-established phenomena. Speculative or not, it is time to take his idea seriously that warfare is not necessarily the primary cause of destruction in ancient monuments and cities. Some of the most compelling research in the book is explained via copious use of photos with parallel fallen columns, crushed stacked artifacts and toppled wall course units - exactly as an earthquake positions architectural elements parallel to the direction of a seismic event - and excellent charts where Nur correlates proven high density and high intensity seismic activity with destroyed historic sites, e.g. Selinunte, Susita, Masada, Megiddo, Thebes (Greece), Qumran, Alexandria, Teotihuacán, etc., in historically active fault and rift zones. While not everyone will agree, the door Nur has opened cannot now be so easily shut. Whether or not his thesis is ultimately provable given the antiquity of so many possible events is not even the point of his somewhat controversial book, but Nur is right that archaeologists too frequently do not understand or too quickly dismiss the role of geophysics in history, and his sensible call to reexamine the physical evidence is timely. As a geoarchaeologist who has visited many of the historic sites Nur analyzes and also with training at the intersection of geology and archaeology, I highly recommend this book.

A fascinating look at the end of the Bronze Age

Published by Thriftbooks.com User , 13 years ago
One of the subjects that fascinated me in school, and indeed, for most of my life, has been the topic of archaeology. Forget Indiana Jones, the real excitement is untangling the clues left by the past, and what with the new technology that keeps appearing all of the time, the reinterpitation of what we thought were the facts. Author Amos Nur with Dawn Burgess looks at how geology has affected history -- and it's the immense changes that an earthquake can unleash on civilization. Nur, a professor at Stanford University in California, takes a closer look at the end of the Bronze Age, about 300-500 BCE, and comes up with some surprising new theories for why so many civilizations failed in such a short span of time. The traditional theory is that the eastern Mediterranean was overrun by what was known as the Sea Peoples, who looted and burned cities in their wake, leaving not much else behind but scorched ruins. What skeletal remains have been found have been explained away by war injuries, and left at that. If the idea of earthquakes causing destruction came up, many archaeologists dismissed the notion out of hand, saying that it was very unlikely and not very possible. Amos Nur takes a very different track, however. By using geology, archaeology, and even biblical legend, he gives a provocative new theory that much of the Bronze Age civilizations came to an end by a series of earthquakes, and triggered tsunamis. To back up his theories, he looks at the geological and archaeological record, using not just ancient narratives, but also more modern seismic events, such as the tragic 2004 Sumatra earthquake and tsunami, the 1923 Kanto earthquake in Japan that ravaged Tokyo, and the earthquakes in 1750 Lisbon that destroyed most of the city and created both religious fervour and also may have helped to spur on the Enlightenment. Along the way, we get to learn about how such widespread disasters have created political upheaval in their wake, and how our ancestors may have tried to understand such seemingly random events by viewing them as signs of divine displeasure. As well as the narrative, Nur uses charts, maps and photographs of various earthquake sites. It were the photographs that undid me -- one was of a young family huddled together, found beneath massive ceiling stones that broke my heart, and a mute testimony of what happened in a matter of minutes. Sidebars are scattered throughout giving some basic information about how earthquake faults work, what kind there are; and other topics such as radiocarbon dating, and how it works; and finally, what is societal collapse? While the narrative is very dry, the subject matter is fascinating. I found myself understanding more of how earthquakes not only affect the immediate area of destruction, but also how they can have a ripple effect across a far wider area. While this isn't for the casual reader -- an interest in or some knowledge of geology or archaeology is really needed to grasp most of

An Intriguing Reappraisal Of History

Published by Thriftbooks.com User , 13 years ago
Amos Nur has reexamined some of the mysteries of the ancient world and determined that in all likelihood earthquakes were to blame. He and his co writer Dawn Burgess are geophysicists, well able to examine the evidence and conclude that archaeologists, historians, and others who have developed theories about the past without taking seismic events into account are mistaken. Most of the book examines the events at the end of the Bronze Age, when something caused a widespread collapse in Mediterranean societies. Heretofore most historians had believed that invasions from hostile Sea Peoples and other interlopers had caused this decline, but Nur, after looking at the ruins, examining human remains, and checking sites for the tell tale signs of tremors, is persuasive that the region suffered a deadly rash of earthquakes. Among the most interesting parts of this book are Nur's examinations of Biblical prophecies to see if they could provide clues about earthquakes and other sesmic events. I also found his discussion of the Lisbon earthquake of 1755 and its impact on Enlightenment Europe fascinating. This is a well written work, scholarly but accessible to non-scientists. It should have a great influence on new interpretations and understandings of the history of the ancient world.

The Days the Earth Moved

Published by Thriftbooks.com User , 14 years ago
"Apocalypse" is a well-written and fascinating discussion of the role that earthquakes may have played in the Bronze Age history of the Mediterranean and the Middle East. Nur is a geophysicist who argues that archaeologists are too ready to reject earthquakes as a cause of the widespread devastation that is sometimes found at ancient sites. According to Nur, the archaeologist's preferred interpretation is usually that invading armies caused the destruction. Nur admits that this interpretation may be right in many cases, but persuasively argues that archaeologists too often ignore evidence that the real cause of the devastation might have been an earthquake. Nur brings a geophysicist's perspective to the archaeologist's world, observing that many ancient sites (such as Mycenae) are affected by significant fault lines that pass directly through ancient ruins, sometimes visibly offsetting walls and staircases. Others ruins contain the remains of people killed thousands of years ago by collapsing walls or ceilings--the skeletons bear the telltale signs of the crushing injuries typical of earthquake victims. Nur suggests that some ancient abandonments and migrations might have been triggered by earthquakes. For example, some of the devastation usually attributed to the mysterious Sea Peoples may have been caused by earthquakes, either because the earthquakes caused the destruction outright, or because they severely damaged fortifications and killed large numbers of people, leaving cities vulnerable to opportunistic invaders. Archaeologists have tended to dismiss the earthquake explanation for sometimes widespread devastation in the ancient world because much of it (such as the events around 1200BC that preciptated the Greek Dark Ages) appears to have happened suddenly over an implausibly wide area for an earthquake. But Nur argues that very widespread damage could have been caused by either a single very large earthquake, or by an "earthquake storm" (a cascade of earthquakes caused when one quake increases pressure on another fault, leading to a series of events). Both of these possibilities are fair game from the perspective of a geophysicist, and Nur urges that archaeologists should consider the possibility carefully when interpreting ancient sites. Nur's book is an enjoyable mix of geology, geophysics, ancient history, geology, and forensics, but it also contains a warning. What happened in the Mediterranean and the Middle East in the ancient world can happen again, as it did during the Jericho Earthquake of 1927. If archaeologists and geophysicists can learn from each other, they are more likely to spot major earthquake hazards that might otherwise be overlooked.

A Captivating Book with Everything

Published by Thriftbooks.com User , 14 years ago
Ancient history, archaeology, geology, forensic science, detective work, mystery, etc., this book has it all. According to the principle author, a geophysicist, most archaeologists and historians are not giving enough weight to the possibility that earthquakes have had major influences on human societies in the ancient past. The end of the Bronze Age, around 1200 BC, is offered as one of several important cases in point. By examining physical evidence from various archaeological sites, mainly in the eastern Mediterranean, as well as the local geology (tectonic plates, faults, etc.), the author attempts to demonstrate that, in many cases, earthquakes have not been given due credit for much of the devastation observed. Ancient texts are often quoted to reinforce his case and certain biblical passages are re-interpreted in light of his arguments. The writing style is engaging, highly accessible, authoritative and is a model in clarity; some chapters are indeed quite gripping. Fully illustrated with many photographs, charts and maps, this fascinating book can be enjoyed by anyone, although ancient history and archaeology buffs may relish it the most.
Trustpilot
Copyright © 2022 Thriftbooks.com Terms of Use | Privacy Policy | Do Not Sell My Personal Information | Accessibility Statement
ThriftBooks® and the ThriftBooks® logo are registered trademarks of Thrift Books Global, LLC