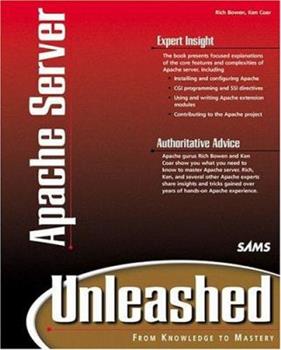 by Rich Bowen and Ken Coar

Designed for both the Apache Web developer and system administrator, this guide teaches you how to extend the base server through CGI scripts and modules, with extensive advanced coverage on modules. This text teaches the system administrator how to fine-tune the server for specific traffic use.

Let's hear it for Apache!

Published by Thriftbooks.com User , 21 years ago
Apache Web Server is the most widely-used Web Server on the net, and for good reason! This book shows you how to harness the incredible power of the Apache Server. It explains everything, from the different request code-values and what they mean, to every line of the httpd.conf configuration file. Also, this book is nearly platform independent! Use it on Windows or Linux (Unix) it doesn't really matter! Of course it favors the Unix platform a little more because that is its native platform. If you are trying to run Apache Server, get this book! It also serves as an INCREDIBLE reference text.

Published by Thriftbooks.com User , 22 years ago
The top choice for understanding Apache concepts and for installing the webserver for several reasons. First, compare it to the competition. The text is easier to understand and a faster read than Wrox's "Professional Apache" (sometimes Wrox books meander to fill space), and the "Apache Bible", is not even in the same league because of problems with organization and presentation.The best way to sum it up: The Authors of "Apache Unleashed" are not afraid of the product so after reading the text you understand what the Apache trend is really about - A very simple yet powerful product -. I guess this is why 60% of Internet servers are Apache based. Intentionally, the book "Apache Unleashed" remains true to this concept. Of special note - This book also addresses Windows users who want to run Apache (I believe this is a growing market.)Starting from scratch, I was able to install Apache and point 150 domains to my in-house web server during one weekend. (You also need O'Reilly's DNS Bind to do this.)Good Luck!

Published by Thriftbooks.com User , 22 years ago
Just a note of clarification: I suspect that that K. Limberg was thinking of a different book when writing the last review. There are at least two books that might have prompted it: one is essentially a copy of the source code ('Apache Server Commentary'), and the other is a copy of the documentation on the Web site (I have a copy, but can't remember the title). I can assure you that 'Apache Server Unleashed' is neither of these; it contains hundreds of pages of technical custom-written text that appear nowhere else. I know, because I wrote a bunch of it. :-)BTW, the 5-star rating I've given is because I have to give *some* rating, and to offset the single star from what I sincerely believe is a mistaken review.

Best of the Bunch

Published by Thriftbooks.com User , 22 years ago
This is by far the best, most "up to date" book on the market. Most of the other "big" titles available were published Jan of 1999 right before Apache made big changes in its configuration, making those books seem dated. The content is fresh, easy to understand and comprehensive. A definite must read for anyone interested in using Apache Server.

Published by Thriftbooks.com User , 22 years ago
From a beginners point of veiw, this is an awesome place to start with apache server.. it starts from it's infancy and covers almost every aspect. definately a good read..
Trustpilot
Copyright © 2022 Thriftbooks.com Terms of Use | Privacy Policy | Do Not Sell or Share My Personal Information | Accessibility Statement
ThriftBooks® and the ThriftBooks® logo are registered trademarks of Thrift Books Global, LLC