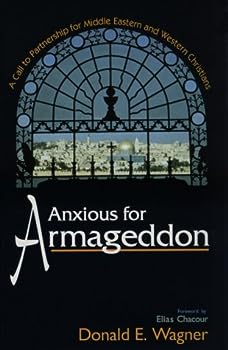 Anxious for Armageddon: A Call to Partnership for Middle Eastern and Western Christians

*** Please Read This *** Very good - Ships from Ohio - No Markings - Fast Shipping- Free tracking - 12-C-34 This description may be from another edition of this product.

Critique of the US Armageddon lobby?

Published by Thriftbooks.com User , 18 years ago
D. Roberts review, below, convinced me to buy this book immediately"The prophecies and Divine Eternal Promises relating to the People and the Land of Israel are plentiful, precise and explicit...The Jewish inheritance to the Land promised throughout Scripture beginning in Genesis and the prophecies relating to their regathering and the end times are ridiculed."Absolutists like Roberts have been duped by the very end times false prophets that Jesus clearly warned his disciples to shun, the "ferocious wolves in sheep's clothing," revealed by their fruits. Prescriptive prophets who presume to divine "precise and explicit" prophecies are the greatest threat to peace. Then again, that is not what they want.Roberts' denunciation is a resounding endorsement.

A view contrary to the Bush administration and D. Roberts...

Published by Thriftbooks.com User , 18 years ago
While D. Roberts suggests that Wagner's excellent and vitally necessary book is merely anti-Israeli propaganda and a misinterpretation of Scripture, the reality is that D. Roberts is blinded by his own anti-Catholicism and insistence upon a fundamentalist reading of Scripture. Those who seek the spirit of the Word will immediately see the truth in Wagner's book.This book should be read in conjunction with Fr. Elias Chacour's "Blood Brothers," a moving tale of one man's quest for true peace, reconcilation and brotherhood among all the children of Abraham.

An Absolute MUST Read

Published by Thriftbooks.com User , 19 years ago
I could not write a better review than Robert L. Knetsch. This book is a must read for ALL people.

Published by Thriftbooks.com User , 21 years ago
Don Wagner has written a captivating and fascinating account of his own transformation from a Christian who subscribes to the dispensationalist pro-Israeli stance heresy that festers within many evangelical churches today to a person who desires compassion and love for all people. This is what Christ came for - not to cause division over land, but to be the final fulfillment of all prophecy.And it is prophecy that is the very problem, says Don Wagner, and hence the reason for the title of this book. Some say that God has blessed the Israelis in their ability to dominate over Arabs with such power (e.g., the six day war). But such a view is not completely accurate if we also see how many Christians who are "anxious for Armageddon", who want to "force" their view of biblical prophecy to occur, have been great supporters of the Israeli regime. And a regime it is. Palestinians to this day live in refugee camps and exist in a virtual apartheid. The very prescient point of this book is not anti-Israeli, but an attack against pro-Rapture, dispensationalist Christians who use their skewed and incorrect view of prophecy to support the existence of Israel at all costs. This is not to say that Israel must not exist, but should it at the expense of the lives of Palestinian families? Wagner presents these arguments with passion and love. It may be controversial, but it is hard to ignore. Read and Enjoy!
Trustpilot
Copyright © 2022 Thriftbooks.com Terms of Use | Privacy Policy | Do Not Sell My Personal Information | Accessibility Statement
ThriftBooks® and the ThriftBooks® logo are registered trademarks of Thrift Books Global, LLC