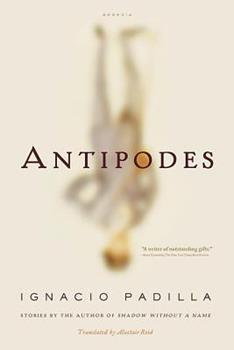 These lively and eclectic narratives, by the author of Shadow Without a Name , move from the scorching heat of the Gobi desert to the glacial heights of Mount Everest: here, among others, are the stories of a Scottish engineer who builds an exact replica of the city of Edinburgh in the dunes; of a dying, cross-dressing pilot who allegedly climbs Mount Everest and then mysteriously disappears; and of a monk who conjures the devil to prove the devil's...

Published by Thriftbooks.com User , 12 years ago
Was completely charmed by this delightful collection of surreal short stories. All at once reminded of Isabel Allende, Unamuno, Rudyard Kipling and Cervantes.

Antipodes - Opposite Points on the Earth's Surface

Published by Thriftbooks.com User , 16 years ago
Ignacio Padilla really delivers with this collection of eclectic, mesmerizing fables set during various historical times in the 19th and 20th centuries. Every story is well crafted and character-driven; the settings large, the stories intimate and inviting. Padilla has obviously spent his energies wisely in his choice of words, his characters' plight, and his landscapes' depth. This book was just a delight to read. It will be one of those books that I look forward to sharing with new people again and again. >>>>>>><<<<<<< <br /> <br />A Guide to my Book Rating System: <br /> <br />1 star = The wood pulp would have been better utilized as toilet paper. <br />2 stars = Don't bother, clean your bathroom instead. <br />3 stars = Wasn't a waste of time, but it was time wasted. <br />4 stars = Good book, but not life altering. <br />5 stars = This book changed my world in at least some small way.

Published by Thriftbooks.com User , 16 years ago
Ignacio Padilla writes wonderful "fables" with themes of colonialism, politics, adventure, ethnic superiority, personal honor and life in general run amok - entertaining tales showing potential but not yet up to the quality of the masters (Pelevin, Calvino, Borges). However, if you want a chuckle on perfect health or minimal need for sleep Padilla will provoke both thought and laughter. My favorite image is that of paintings "quite simply wearing away from being looked at so much." Not even time is reliable in Rhodesia when settlers are afflicted with "nkalo." War becomes a calculation of odds - based on authentic vs. imitation weapons. Padilla's story worlds are inventive and amusing but not quite compelling in the manner of Borges or Pelevin. Padilla is clearly an author worth watching in his development.

Published by Thriftbooks.com User , 17 years ago
In this little collection of stories-- his second book to be published in English, the Mexican writer Ignacio Padilla establishes himself as a fantastic teller of tales. They are set all over the world and no two of them have anything in common with each other except they are all inventive and brilliant. In the story "Ever Wrest: Log of the Journey," we have a pilot into women's clothes who climbs Mount Everest and then disappears: "The Chineses say nothing about how Wilson's [the cross-dressing climber] body was clothed but it is still possible to view, in the Alpine Museum of the Communist Party, a voluptuous high-heeled shoe that the legendary mountaineer Chu Ying-hua swears he found under the snow only a few paces from the British flag that Sir Edmund Hillary planted on the summit of Everest just a few days before Princess Elizabeth was crowned in Westminister Abbey." Another favorite of mine is "Chronicle of the Second Plague" in which inhabitants of St. Martin believe that since they have survived the bubonic plague that they are immune from a second plague, a little like the belief many of us hold that lightning would never strike the same place twice. Then there is the narrator in "The Chinaman with the Heads" who meets a gentleman who is trying to get through customs with a box that contains "half a dozen human heads carefully wrapped in linen, with a penetrating odor that led me to believe they had been preserved in formaldehyde." Mr. Padilla seems to be right smack in the Latin American writers' tradition of magic realism. I understand a new novel will be translated soon into English. I can't wait to read it.

Published by Thriftbooks.com User , 17 years ago
I came across this slim volume while looking around for short story collections and was pleasantly surpised by the quality of Padilla's writing. This collection reminded me of some of Italo Calvino's stories, with shifts from simplicity to elegance throughout. In under 150 pages you will visit points around globe, including the Gobi desert and a deranged explorer, a sanitorium transformed into a lush garden, and a curious city known for its flour during a time of starvation.
Trustpilot
Copyright © 2022 Thriftbooks.com Terms of Use | Privacy Policy | Do Not Sell My Personal Information | Accessibility Statement
ThriftBooks® and the ThriftBooks® logo are registered trademarks of Thrift Books Global, LLC