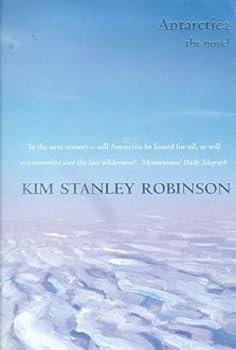 This description may be from another edition of this product. From the bestselling author of The Mars Trilogy comes a spectacular new novel of the near future. Beneath its ice and frozen wastes, Antarctica contains great riches of mineral wealth. Antarctica...

Published by Thriftbooks.com User , 19 years ago
After his Mars trilogy, just about anything Kim Stanley Robinson was going to do was highly anticipated. The worst thing he could have done was try and repeat his earlier trilogy just in a different setting. To his credit, he did try something different here, but not different enough at times to really make the book come alive. Don't get me wrong, it's a beautifully written and passionate book . . . in the acknowledgements Robinson mentions that he spent several months on the continent and the staggering amount of research shows . . . even if you've never been to Antarctica this book will make you feel like you have. Every mountain every cold gust of wind every pure blue sky is described beautifully here and that love of the land comes through both in the writing itself and the characters. The story, however, feels like a slight retread of the Mars trilogy, with the underlying conflict being whether to keep the land pure and unsullied or to exploit it as best we're able. To this end several plots spin around showing the different aspects, from the tentative oil drilling to the political angles to the scientific and the people just visiting. This crosssectioning almost defeats the book because with so many characters and views you don't get to know the characters as well as you did in the trilogy, only in several moments do they really come alive to the reader and the sparks start to fly. So the book functions mostly like a travelogue, albeit a wonderfully written one and the passion here just about makes up for the plot, but there are times when you'll sit back and wonder if the book is missing something important. The tension that drove the Mars trilogy is absent here, either because the setting isn't as futuristic or simply because he's trying to do more with less . . . but in the end it's entertaining and even a slight book by Robinson is miles better than anyone's best at this point. Don't expect to get as excited by it as his earlier books have done for you, but pick it up anyway. The pleasures it offers may not be new, but they're pleasurable nonetheless.

Antarctica: A world worth contemplating

Published by Thriftbooks.com User , 21 years ago
I have never read Kim Stanley Roberts before reading Antarctica, but am I ever glad I picked this novel up at the airport bookstore!Before reading this book I, like the vast majority of people on this planet, knew next to nothing about the icy continent at the South Pole. I can proudly say that my knowledge has been increased many fold thanks to Mr. Robinson's superb novel. Mr. Robinson weaves a wonderful, fictitious story with the true history of exploration of the icy continent, and with modern scientific authority. This combination keeps the reader turning page after page into the wee hours of the morning!When all is said and done, the reader comes away satisfied with an intelligent story, an appreciation of the history of mans' exploration of Antarctica, and an awareness of the need for a sane,workable, globally-endorsed plan to manage and protect the great continent at the bottom!

Published by Thriftbooks.com User , 21 years ago
Once in a long while a book comes along that can leave such an impression on a person, such a new perspective on a whole continent, such a feeling for the characters in the book, you'll forget what was life before you read this. It is impossible to put this book in words, so i won't even try. Just go get the book, its worth it. Oh, and you may think the first hundred or so pages are dull, but after a while in you really feel like you know these people, and that really adds up to the feeling you develop for the characters in the book.

Published by Thriftbooks.com User , 21 years ago
Robinson has written a powerful and beautiful novel which challenges the reader to think about the state of our planet and its immediate future. The setting is the continent of Antarctica in the near future and the political, social, and environmental free-for-all that develops as nations look to the last pristine area of the globe for natural resources. Robinson gives us believable characters caught between the forces of the tides of human history. In particular, the chatacter named Val is one of the great heroines of literature of any genre. Their plight is exhilarating and heart-rending. This novel is about the love of place and the heroic nature of the best in us as humans.

Published by Thriftbooks.com User , 22 years ago
Antarctica will chill your soul! If you like Michener you really need to go to Antarctica with Kim Stanley Robinson. This book has great historical info, a moving plot, and an artistic touch to it that will chill you on the hottest of afternoons. I really enjoyed Antarctica and fully recomend you hunker down with a copy.
Copyright © 2020 Thriftbooks.com Terms of Use | Privacy Policy | Do Not Sell My Personal Information | Accessibility Statement
ThriftBooks® and the ThriftBooks® logo are registered trademarks of Thrift Books Global, LLC