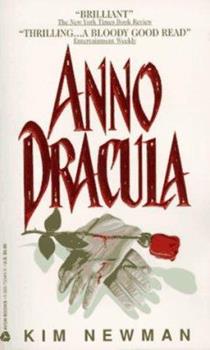 (Book #1 in the Anno Dracula Series)

This description may be from another edition of this product. "Kim Newman's Anno Dracula is back in print, and we must celebrate. It was the first mash-up of literature, history and vampires, and now, in a world in which vampires are everywhere, it's still the...

God Save The Queen!!!

Published by Thriftbooks.com User , 12 years ago
Vampires have become my most loathed protagonists within the horror canon and I put the blame for that squarely on the shoulders of Anne Rice, the godawful Underworld (Widescreen Special Edition) movies and a terrible television series starring Sarah Michelle Gellar. Its with great trepidation that I pick up a vampire novel these days, as you can guarantee that 99% of everything written in the sub-genre is absolute crud. Luckily 'Anno Dracula' - which is an oldie but a goodie - sits squarely within the 1% that aren't crud. In fact, Its probably one of the four greatest works in the field ever written (the other's being Stoker's original tale of the Wallachian prince, Richard Matheson's I Am Legend and Stephen King's 'Salem's Lot). You could classify it as both a parallel world novel and a sequel of sorts as it speculates on what Vlad Dracul's influence could have been on Victorian England had the nefarious plans to spread his canker to the cradle of the British empire succeeded. In short, Dracula - who remains tantalisingly absent within the novel until the closing pages - legitimises his reign by taking Victoria as his bride and becoming Prince Consort; vampirism gains a coercive air of semi-respectability amongst the general public and the established order as only those who receive 'the dark kiss' stand a chance of prospering within the rigidly hierarchical political, military and social establishments; all who resist this re-ordering of society are put to death or sent to concentration camps. The genius of Newman's story sits within the way he mixes his encyclopaedic knowledge of Victorian London and its mores with that of the fantasy genre to produce an astounding work of metafiction in which real people such as Oscar Wilde, Frederick Abberline, John Merrick, Sir William Gull and Lord Shaftesbury rub shoulders with the likes of Bill Sykes, Graf Orlok, Fu Manchu, Mycroft Holmes, Edward Jekyll, Daniel Dravot and, at one point, a Victorian analogue of Kolchak - The Night Stalker. In fact, part of the joy of the novel is spotting the various allusions to characters from other works of fiction. I spotted many, many of them: probably my favourite was the cameo by one of the hopping vampires from the legendary Cantonese Mr. Vampire films. But there's much more to this novel than star turns and vague allusions. It has a very fine, intricately rendered plot which ostensibly concerns the hunt by various agencies for a mysterious killer of vampire prostitutes in Whitechapel, known only as 'Silver Knife', whose reign of terror threatens to destabilise the newly established (anti)social order. If you want to know more, you'll need to pick up a copy and I highly recommend that you do. I currently have Newman's two sequels to the book, Bloody Red Baron and Judgment of Tears:: Anno Dracula 1959, stacked and ready to be devoured at my leisure. And I can't wait.

Published by Thriftbooks.com User , 13 years ago
1888 London, and Dracula is hanging out with Queen Victoria, while in Whitechapel, prostitutes are dying strange bloody deaths... It's obvious that the author had a lot of fun writing this, and I had just as much reading it. Historical fact mixed with Newman's particular sense of whimsy and walk on parts from fictional characters from the Victorian era, it's a tremendous mixture. The ending comes a bit too quickly, and old Drac becomes a bit of a comic parody of a vampire lord, but all in all I loved it.

Published by Thriftbooks.com User , 24 years ago
One of the best vampires books ever written. It combines the suspense of a mystery novel with the mysteries of the vampire. Dracula has defeated Van Helsing, and become Queen Victoria's advisor. Now it's 'in' to be a vampire, and vampires are appearing in all walks of life, but someone in Whitechapel is killing off the vampire whores. We are re-introduced to the characters from the original Bram Stoker novel, but as an added bonus to history and literature fans, there are cameo appearances from some of the greatest characters from the literature and history of the Victorian era, from Jack the Ripper to Sherlock Holmes, and even a friendly jab at Anne Rice. A definite MUST read for any vampire/history/literature fan.
Copyright © 2020 Thriftbooks.com Terms of Use | Privacy Policy | Do Not Sell My Personal Information | Accessibility Statement
ThriftBooks® and the ThriftBooks® logo are registered trademarks of Thrift Books Global, LLC