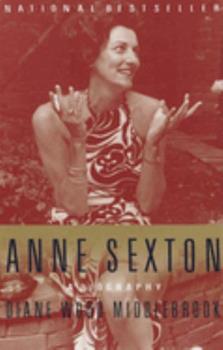 Anne Sexton began writing poetry at the age of twenty-nine to keep from killing herself. She held on to language for dear life and somehow -- in spite of alcoholism and the mental illness that ultimately led her to suicide -- managed to create a body of work that won a Pulitzer Prize and that still sings to thousands of readers. This exemplary biography, which was nominated for the National Book Award, provoked controversy for its revelations of infidelity...

Biography reminds us we need to read Anne Sexton

Published by Thriftbooks.com User , 13 years ago
This biography reminds us we need to read Anne Sexton, as she was one of this country's fore-most confessional poets. The biography was engrossing, and elucidated many things I had not known about Sexton, or had only vaguely heard discussed. Such difficult times she and her fellow confessional poet, Sylvia Plath, lived in. One cannot help but wonder how things might have been different for Sexton and Plath, had they been born a couple of decades later. Very well worth reading.

Published by Thriftbooks.com User , 16 years ago
This advice applies to anyone who has stumbled upon this page whether or not you like biography or poetry or Anne Sexton. It is one of the few biographies I have read that I would describe as a true page-turner. Yes, Sexton's life has all the ingredients of a page turner. There's incest, there's adultery, there's substance abuse, there's mental illness. All this in the life of someone whose adulthood began as a rather typical 1950s housewife. Middlebrook does not spare us the gritty details, but neither does she exploit her subject for mere sensationalism. Always, even in taking the controversial step of using Sexton's psychotherapy tapes, she demonstrates respect for her subject and for the surviving members of Sexton's family. When her evidence is conflicting about what really happened, as in the case of Sexton's memory of an incestual episode with her father, Middlebrook presents us with the various views of family members and friends and gives us their reasons for believing what they do. Then she presents her own conclusions. Above all else, this is the story of a woman's survival, of her finding herself and saving herself through poetry despite little education and little interest, at first, in art or poetry. Sexton's first poem was a sonnet she wrote after seeing a lecture about sonnets on TV.

Published by Thriftbooks.com User , 16 years ago
Biographies are a tricky business. To tell the truth about a person's life, to be fair and thorough without being unkind is a fine line to tread. Diane Middlebrook certainly didn't flinch at giving the reader the dirt on Anne Sexton. From her series of extra-marital affairs to her daughter's memories of Sexton's inappropriate, incestuous behavior--all of it was fair game in Middlebrook's book. She even quoted from audiotapes of Anne Sexton's therapy sessions. This is a biography of a woman brutally exposed, psychologically naked and under a spotlight; strangely, I think that Anne Sexton would be at peace with this enormous invasion of her privacy. In addition to the lurid personal details and the deep analyses of Sexton's troubled psyche, Middlebrook shows the reader Sexton's intense determination and devotion to becoming a famous poet. Anne would sit at her typewriter for hours everyday, working on poems. She was also very aware of the benefits of creating a dramatic public persona. Sexton would walk up on stage in a striking black cocktail dress with red lipstick and a seductive swagger. Her throaty voice would cast a spell over the audience as she read her poems. "I am a middle-aged witch. . ." she would begin, and the room would be spell-bound by both her glamour and her bold confessional poetry. But underneath it all, she was a nervous wreck, unable to give a reading without a quick shot of liquor to make her knees stop shaking! Diane Middlebrook's biography was so piercing, so unforgiving, it was, at times, truly uncomfortable to read. I felt almost voyeuristic, pouring over these shocking private details of Anne Sexton's life. Yet, Middlebrook's book did give me an amazingly powerful feeling of intimacy with one of my favorite poets. She revealed the fragile, flawed Anne Sexton behind the public shell of dark glamour. Any fans of Sexton's poetry that want to understand the woman behind the words should go ahead and get this book; just be forewarned that Middlebrook does not try to flatter Sexton, only to be truthful.

When Female Genius Is Forgotten Or Ignored

Published by Thriftbooks.com User , 16 years ago
I have not been able to disregard the fact that this brilliant biography by one of the most important poets of our age appears to have been forgotten amid the heat of commerce. But there is another kind of commerce: one in which women have an expertise. When one of us is felled by tragedy, like the huge loss of Anne Sexton, it touches each and every one of us as we learn of its happenstance. One does not have to be a poet, an artist or suicidal to get this. Our collective history as women struggling to balance our lives within a largely patriarchal society with love, home, marriage, divorce, children, career, and faith in whatever form or not - is a burden to which few will admit. Anne Sexton, however, met all of the latter head on with genius artistry and with all the passion and complexitiy any soul could bear. Indeed, as Diane Middlebrook brilliantly writes - she bore it for as long as she possibly could with more grace, style and courage than most. In fact, not only is this biography essential as a purchase, but take the time to collect (if you can...) everything Anne Sexton wrote. You will never be quite the same. And I can only guess that she would have liked that....

Published by Thriftbooks.com User , 18 years ago
You don't have to be a poetry afficianado to find this uniquely well-researched biography fascinating. Middlebrook makes ample use of the beautiful-but-mad-housewife-turned-poet angle, but does the more challenging job of examining the contradictions between Sexton and her work. Controversial access to Sexton's therapy records aside, Middlebrook explores the humanity behind a disturbed (and disturbing) woman who used any means at her disposal--sex, therapy (at the same time, in some instances), alcohol, drugs, her children and her poetry--in an attempt to stay afloat.
Trustpilot
Copyright © 2022 Thriftbooks.com Terms of Use | Privacy Policy | Do Not Sell My Personal Information | Accessibility Statement
ThriftBooks® and the ThriftBooks® logo are registered trademarks of Thrift Books Global, LLC