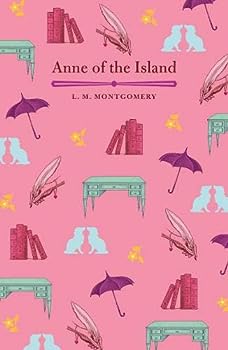 (Book #3 in the Anne of Green Gables Series)

New adventures lie ahead as Anne Shirley packs her bags, waves good-bye to childhood, and heads for Redmond College. With old friend Prissy Grant waiting in the bustling city of Kingsport and... This description may be from another edition of this product.

Anne of the Island

Published by Ash , 1 year ago
Received my copy of the book today, and it beautiful! Can’t wait to read!

Published by Thriftbooks.com User , 17 years ago
"Anne of the Island" is the third of Lucy Maud Montgomery's Anne of Green Gables novels, and completes what we can see as being a trilogy simply becomes Anne finally realizes what everybody in Avonlea has known from early in the first book, which is that Anne Shirley and Gilbert Blythe were made for each other. Having spent time as the teacher at the Avonlea Schools in "Anne of Avonlea," the Anne girl leaves Prince Edward Island for four years of college (hence, she is now "Anne of the Island"). The theme of this story is Anne dealing with "How horrible it is that people have to grow up," as she confronts how her whole world is changing. Ironically, what makes "Anne of the Island" so romantic is the way it challenges romanticism. Even as a young woman Anne creates a romantic fantasy around the world in which she lives, just like she did at Green Gables where there was the old Snow Queen at the window, the Dryad's Bubble, the Haunted Wood, Lover's Lane and all those "dear spots where memories of the old years bided." Now Anne and Priscilla, her school chum from Redmond, are renting rooms in Patty's Place, and making the home of Miss Patty and Miss Maria into their own. Meanwhile, after a thousand romantic drams and enduring both Diana Barry's wedding and the rejection of Gilbert Blythe's proposal (her second actually), Anne finally meets her Prince Charming, Royal Gardner. He is handsome and rich, in short, everything that Anne ever dreamed that she wanted in a husband. Then comes the fateful moment when Roy proposes and Anne opens her lips to say her faithful yes. But this is but a false dawn in Anne's life and there is a fateful Book of Revelation that Anne has to endure before love takes up the glass of time. There is romanticism and then there is that which is romantic and Montgomery shows the difference. There is a reason that this character and these books are enduring classics of (supposedly) juvenille literature.As usual this book is also filled with interesting and colorful characters, such as young Paul and the Rock People, John Douglas who finally speaks at last, and Anne's friend Phillippa Gordon, who also has her eyes opened to the what true love really means. For those who are familiar with the delightful Kevin Sullivan "Anne of Avonlea" sequel there is also the whole episode of "Averil's Atonement" as well as the entire end game with Gilbert. That is the most important part because at long last the final line of Montgomery's original "Anne of Green Gables" novel rings true for our Anne girl.

A remarkable girl's life in the 1880s

Published by Thriftbooks.com User , 20 years ago
I agree with the rest of the reviewers that this book is a page turner, suspenseful, fun, romantic, and all those other fine things. But what I come back to is that this is a story of a bunch of country girls going to COLLEGE in the 1880s. Not twenty years before we had the March girls in "Little Women" who never seemed to seriously consider college as a womens' venue. Yet here we have an actively coed college a few hundred miles north of Concord in Nova Scotia. Montgomery alludes to the presence of at least one professor who disapproved of coeds, but they were clearly an accepted part of the community. And it's funny to see both how much and how little college life has changed. Colleges don't have a coed's dressing room any more, and you rarely see ball gowns, or balls for that matter. But there are still lots of students like Anne attending on a shoestring from one year to the next, relying on a summer teaching job this year, a scholarship the next, and a surprise inheritance after that. Coeds (a long forgotten word) still juggle schoolwork and and social schedules, and have surprise visitors drop in when they're least prepared. When Anne announces she's made money selling an article, her roomie replies, "Let's go get drunk!" I suppose that's the most subversive line I've seen in a Montgomery work, but it also shows how little campus life has changed. And it also leaves me wondering what Anne might have been like after a few glasses of wine.This may also be the most quotable Montgomery book. I cited the "I can't keep secrets -- it's no use to try" in a recent publication of my own, and that's a pretty pale example. Real gems include "Sometimes I sits and thinks and sometimes I jest sits," or the immortal "Facts are stubborn things, but not half so stubborn as fallacies."This would make a terrific film. You don't need a Megan Follows for this, you need someone else. For all her good work in other episodes, she was never quite tall enough nor whimsical enough in style to play this sort of Anne.

The best book I can think of!

Published by Thriftbooks.com User , 21 years ago
In this part of Anne's life she is off to college. She has an amazing four years, with a couple of new friends. She also has a lot of decisions to make about the rest of her life. This is definitely my favorite of all the Anne books! It also keeps up with the tradition of beautiful descriptions of the scenery, which isn't in Avonlea this time. I really urge anyone who liked Anne of Green Gables to read this book.

Heartwarming,touching and brings tears of joy to your eyes

Published by Thriftbooks.com User , 25 years ago
This book,the third book in the Anne of Green Gables series,tells the story of Anne Shirley coming to Redmond College. During the four years,Anne learns a lot of things about life,and her adventures are both funny and heartwarming. People who have read Anne's previous adventures in Anne of Green Gables and Anne of Avonlea will enjoy another wonderful Anne of Green Gables story,set in the beautiful,lush green Prince Edward Island,Cananda. This book is also better understood if you have read Anne's other adventures in the previous books. After they have read this book,they might want to go on and read Anne's life after college in Anne of Windy Poplars. You might want to read all the way up to the eighth book which tells about Anne's daughter,all grown up!
Copyright © 2022 Thriftbooks.com Terms of Use | Privacy Policy | Do Not Sell My Personal Information | Accessibility Statement
ThriftBooks® and the ThriftBooks® logo are registered trademarks of Thrift Books Global, LLC