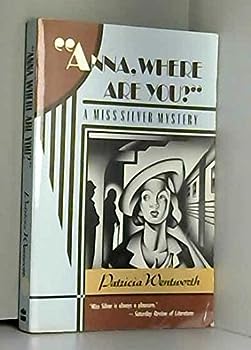 "Anna, Where Are You?": A Miss Silver Mystery

Hired to investigate the disappearance of the governess of the three Craddock children at Deepe House, Miss Silver assumes the young woman's vacant position. With time running out and the iron-fisted grip of terror taking hold, Miss Silver has more on her hands than even she could have speculated.

Published by Thriftbooks.com User , 15 years ago
I was having trouble finding this book, but I finally did, so that is why I read it out of sequence. I had finished the Miss Silver series some weeks ago. This book was written in 1951, so sometime near the last third of Miss Silver's long writing career, but it is by far the best in the series. In it we have all kinds of good things. The best part of the book is that we see our indomitable Miss Silver returning to her former profession as governess. She does this in order to get herself inside a household where strange things have been hanppening, and the latest in these strange things was the disappearenace of a young woman who had been employed in the position that Miss Silver assumes. This is a lively story with lots of eccentric characters, ss well as bank robberies, fraud and murder. This is a fine example of an English cozy, and I'm glad that I finally found the book.

Just a girl who stopped writing...

Published by Thriftbooks.com User , 19 years ago
Thomasina Eliot, an old school friend, is virtually the only human contact Anna Ball has; Anna is nosy, and rather abrasive. After receiving some of Anna's things for storage while she changed jobs (no forwarding address until Anna knew if it would work out), Thomasina is getting worried after the silence stretches to a few months. She feels responsible, since there's no one else to look out for Anna or care, and engages Miss Silver to trace her and find out if she's all right.Miss Silver, through ingenuity and some social connections that the police didn't have, manages to extract some useful information from Miss Ball's last (hypocondriac) employer and her household, and with the help of Inspector Abbot, traces Anna to her last known address: a 'mother's help' at Deepe House, Deep End, Ledshire. Over Abbot's protests (Anna's predescessor drowned, Anna is missing) Miss Silver steps back into governess mode and goes undercover, taking the job at Deepe House. (The Craddocks, or really, Mr. Craddock, have tried to rename it Harmony, while establishing an arts/crafts colony, but the new name really didn't take.)Reading the Miss Silver series, you might get a false impression that they're all similar; far from it. Each book does have at least one set of lovers who are in difficulties of some kind, and who revere her afterwards as a guardian angel (one view of her sitting room in this book stresses all the Victorian-framed photos of young couples and their children). They're generally similar enough in flavor that if you like one, you'll like them all; nice cozy English mysteries.Seeing Miss Silver in the Craddock household is satisfying. Mr. Craddock, the stepfather, is a pompous fool full of high-flown theories about the right to do exactly what you want, and applying it to the kids (unless they get in the way). The kids actually behave like normal kids running wild, with a mother whose health is breaking down under stress, instead of being written as midget adults. Oh, and if you don't have a sense of humor about health food and 'tea' that tastes like hay, you may be offended by this book.

Published by Thriftbooks.com User , 21 years ago
I love Miss Silver. She sees through the wicked and the good with equal acumen, helps the helpless, and gets her knitting done.A young girl who is looking for a lost friend, and an artists' colony that may or may not be what it seems make a fine place to display a set of characters. I especially like the talkative weavers.In this book, we get to see Miss Silver, the former governess, acting as--a governess!
Copyright © 2020 Thriftbooks.com Terms of Use | Privacy Policy | Do Not Sell My Personal Information | Accessibility Statement
ThriftBooks® and the ThriftBooks® logo are registered trademarks of Thrift Books Global, LLC