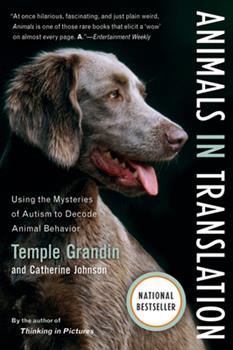 Animals in Translation: Using the Mysteries of Autism to Decode Animal Behavior

by Temple Grandin and Catherine Johnson

A NATIONAL BESTSELLER"Inspiring...Crammed with facts and anecdotes about Temple Grandin's favorite subject: the senses, brains, emotions, and amazing talents of animals."--New York Times Book Review A groundbreaking look at the emotional lives of animals, from beloved animal scientist Temple Grandin.Why would a cow lick a tractor? Why are collies getting dumber? Why do dolphins sometimes kill for fun? How can a parrot learn to spell? How did wolves...

Published by Toni , 1 year ago
A few dog trainers recommended this book to me and it did not disappoint. It explains behavior in an engaging, easy way and genuinely changed how I communicate with my pets. Truly an amazing book — I can't imagine not having Temple Grandin's books on my shelves now!

Published by Nicole V. , 3 years ago
This book is full of things I never knew about animals. I learned something every time I picked it up. It was fascinating to learn how animals see things from their perspective!

For me, a guide to understanding all the mistakes I've made

Published by Thriftbooks.com User , 16 years ago
About a year and a half ago, one of our two small dogs rejected her crate. The crate was a small metal cage that she would sleep in at night. For the first five years of her life she had been happy, even eager, to get in at night. But suddenly, it seemed that the very thought of the cage terrified her. She would spend the entire night throwing herself against the sides, hitting the door with her paw, and scratching the plastic tray that was the bottom piece in an attempt to dig her way out. About this time my wife very wisely left for Sweden for several weeks, and after ten days without sleep I capitulated and let the dog stay out of the cage at night. I once enjoyed a blissfully dog-free bed. Today I sometimes wake up with a wet nose touching mine. If only I had read this book before that happened. Temple Grandin is an autistic and an expert on animal behavior, and she is convinced that the two go together. Whether or not her theory that some of the changes in the brains of autistic people mirror the natural condition of many animals is correct or not, the power of her insights are undeniable. She skillfully leads the reader through the mental life of animals, emphasizing the areas where the way our brains process information is so different from those of animals that we often don't even consider that there might be alternatives. For instance, in one section she suggests that animals experience pain much less keenly than humans do, noting that often they will show no signs of discomfort even when they are clearly injured. On the other hand, she says, fear may be as debilitating for animals as severe pain is for humans. Both humans and animals experience both pain and fear, but animals experience fear as the ultimate unpleasantness, just as humans experience pain. Other sections expose other facets of animals behavior that seem nonsensical at first, but seem perfectly logical when placed in the correct context. Many of her lessons involve putting herself in the place of the animals involved, on the theory that her autistic brain will let her naturally see their motivations. The amazing thing is how often it seems to work, producing not just an enthralling book but concrete advances in animal handling systems for meat packing plants and horse trainers. After reading this book I'm convinced that I could have solved the problem with my dog by finding what small detail was causing her to panic and changing it - examples in the book show that it could have been something as simple as painting the cage or moving it from one corner to another. I can't recommend this book highly enough, especially if you want to keep your dog on the floor and the bed to yourself.

Published by Thriftbooks.com User , 17 years ago
Dr. Grandin does not talk with the animals, but she takes the time to think deeply about what is on their minds. While many of us will walk into a situation with animals and think nothing of it, Grandin will take the time to deeply observe the environment and think about how she would react to it as an animal. Her fascination with animals has lead her into a career where she advises stockyards on humane treatment of animals. Her rules for running a stockyard are simple - she breaks it down into a short list, mostly an observational one. If the animals limp, cry out, need to be prodded, or are not humanely killed, she will flunk a facility. She says that a facility does not need a long worksheet to check off - it simply has to meet her short list of rules, which are result oriented. If the animal is uncomfortable in one of the ways described, no amount of paperwork is going to cover it up. Grandin describes the emotional makeup of animals, mostly focusing on hoofstock, which are her professional focus. She does describe at great length, dog behavior. There are different kinds of aggression, not just one, and she does an excellent job of describing why an animal will behave in an aggressive fashion. She does make some generalizations that I don't necessarily agree with. She thinks animals with pale pelts and blue eyes show a tendency toward instability. She also asserts that marmalade cats are fearful. (She's never met some of the affable ginger cats that I've met.) This probably arises from the fact that her book tends to be observational rather than a compilation of other writings. She does say that she is visual and not verbal, which explains why her personal experiences have more weight in the narrative. She claims that her ability to view the world as an animal would comes from her autism, but I honestly think she is just gifted with a kind of patience and sensitivity that not very many other people share. (I say this as the friend of an autistic person and a friend of a parent of an autistic child). I will say that because of how her mind works and how she is visual and not verbal that the language of the book is very accessible to the lay person. She does not bludgeon us with technical vocabulary, which many PhDs will do in their books. Her sentences are short and simple and she gets her point across in a very concise way without a lot of jargon and technical terms. (We know a horse is a horse - of course, of course - and don't need words like "equid" and so on.) As an urban person, I found the book valuable in understanding cattle and horses, which are not really in my world. Next time I see a cow, I will have to resist the urge to lie down in the field and see if she will come up and say hello...

Published by Thriftbooks.com User , 17 years ago
Animals in Translation: Using the mysteries of autism to decode animal behavior.I will never think about animals, and about autism, and about "normal" people quite the same way again. This is a landmark book.The book is badly organized. You will have to read every page. You may not be interested in the long pages where she talks about slaughter houses, but then right in the middle of a paragraph you suddenly come across a bit of wisdom that you would not want to have missed. Right then you must underline it or you will never find it back again. The upshot of this book is that animals do not have a fully functioning frontal lobe, nor do autistic people, and she tells us throughout the book what that is like, over and over again until you start to get a deep understanding of what it is like. We get a better understanding of ourselves too. The frontal lobe "puts it all together", and having put it all together, we race over the details like a speed boat over water. We do not see the details. An autistic person on the other hand, can not help but see them. He sees all the details, and only the details. He is overwhelmed by them. He sees all forty shades of brown. He can not see the forest for the trees, and more trees, and more trees. He hears every tone. He smells every odor. His life is a jumble of details. As you might expect, her book is rich in details about her own life and about all the animals she knows and when you emerge at the other end of the book, you feel immersed. Being a "normal" person you can not remember all the details, but you "know" something about these people's lives, and about animals' lives in a way you could never get from a text book. And yet, at the same time, she also has a doctorate and she does her own research. She has the training to write the text book, but then, being autistic, she can not. She does not hold the whole picture and therefore it remains a badly organized book. That is the message. That is what it is like to be autistic. That is what it is like to be an animal. Nicholas DormaarBritish Columbia, Canada.

Published by Thriftbooks.com User , 17 years ago
I savored every moment of reading this book. Grandin has an enthusiasm for her subject that she combines with endless quantities of fascinating research and observations about animals. The book isn't exactly what I expected - I thought it would focus more on her own interactions with animals. However, because the book is so engagingly written and the information is so interesting, the difference between what I expected and what I got didn't diminish my enjoyment in the least. Grandin does a much better job of making the scientific information more interesting and less dry than in her previous book, Thinking in Pictures, which contained long passages about medications that could be used to treat autistic people. I found that book to be much more uneven. Animals in Translation, however, held on to my attention from the first page to the last. While she also includes a generous amount of scientific information in this book, it is all so interesting and sometimes surprising, that I was never bored. If you have pets or are simply interested in animals and/or biology, this is a must-read.
Trustpilot
Copyright © 2022 Thriftbooks.com Terms of Use | Privacy Policy | Do Not Sell or Share My Personal Information | Accessibility Statement
ThriftBooks® and the ThriftBooks® logo are registered trademarks of Thrift Books Global, LLC