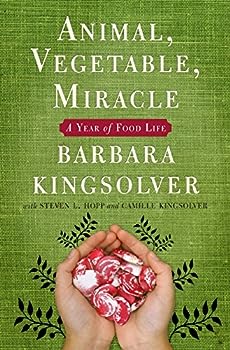 "A profound, graceful, and literary work of philosophy and economics, well tempered for our times, and yet timeless. . . . It will change the way you look at the food you put into your body. Which is... This description may be from another edition of this product.

Published by Adill , 3 years ago
An inspiring take of a family trying to live authentically

A love story about food, land, and our earth.

Published by Thriftbooks.com User , 15 years ago
Animal, Vegetable, Miracle: A Year of Food Life By Barbara Kingsolver, Steven L. Hopp and Camille Kingsolver "Animal, Vegetable, Miracle" was given to me by some friends early last June, just as our garden was starting to flower. I was a little hesitant to give it a read since some of Barbara Kingsolver's other writings had failed to inspire. However, I had just finished another very compelling book about the state of food in America: Michael Pollan's "The Omnivore's Dilemma". I was interested to see what Ms. Kingsolver had to add to the discussion. According to the jacket of the book, she and her family were willing to commit to a year of eating only locally grown food, and in these days of peak oil and economic uncertainty, I was intrigued to find out how such an experiment would work out. So, in between weeding the garlic and picking string beans, I dove in to "A Year of Food Life". The day's work done, it was with great pleasure that I would sit down on quiet and peaceful summer evenings to connect with the Kingsolver's as they explored what life is like when you are committed to being part of your local food-o-sphere. It definitely requires a huge shift in attitude if you, like me, have grown up expecting to be able to eat anything you want, anytime you want it. The Kingsolver's not only had to change their expectations about food availability, they actually had to change their address! They had lived for many years in Tucson, AZ, a place that, as it says in the book, "might as well be a space station" in terms of human sustenance. Every morsel of food comes from far away, and every drop of water comes from a nonrenewable and quickly disappearing source. So, after years of planning and discussion, they packed their bags and headed to the old family homestead in southern Appalachia, where, in the immortal words of Sam Kinison, "the food is". Water falls from the sky, green things grow, and people are not so far removed in time from the era when all food was both local and organic. Ah yes, I said to myself, it sounds an awful lot like New England, and the more I learned about the Kingsolver's story, the more convinced I became that we New Englander's could learn to live locally (again), too. The book chronicles the family's experiment in local food; from the move to their new home, the first spring day when they broke free from the industrial food web, and the days and weeks of planting, weeding, harvesting, and storing the bounty of their land and their neighbor's land. They planned to eat only what was available within a 100 mile radius, with a few small exceptions. Before you say, "Hey, I can't live without bananas!", know that each family member was able to choose a special food item that might break the 100 mile rule. Barbara's partner Steven, a man after my own heart, chose coffee. As I imagined how I might survive on a local only diet, I have to admit that Ethiopian coffee, Costa Rican chocolate, and French wine would

Published by Thriftbooks.com User , 15 years ago
A beautiful book. A book to warm your heart, feed your brain and make your stomach growl. If you have even the slightest interest in sefl-sufficiency and growing/making your own, this book will be an inspiration. But it also ties what you eat back to the larger picture, and in that way is part of this amazing burst of new books about making the world better through your actions like Worldchanging: A User's Guide for the 21st Century, Design Like You Give a Damn: Architectural Responses to Humanitarian Crises, The Omnivore's Dilemma: A Natural History of Four Meals, and Blessed Unrest: How the Largest Movement in the World Came into Being and Why No One Saw It Coming. These books all point the same way, and say that there's a new way of acting towards the Earth and other people, and we're all part of making it real.

More exposure of an American epidemic

Published by Thriftbooks.com User , 15 years ago
Look what happened when the nation turned its attention to the tobacco industry. If only that would happen with the fast food/processed food industry. One can only dream..... Thank you so much, Barbara Kingsolver, for grabbing that attention and making it the focus of your new book. I loved it. It was so well written. I hope this subject really catches the attention of more and more people. For our familys conversion to organic and local, mindful eating it started with the movie, "Supersize Me," and went on to "Fast Food Nation, etc." Ms. Kingsolver points out in her book it is a slow process to weed yourself off that junk food. Ms. Kingsolver opens up the doors to her farm and family life to share how we can save our lives (literally) and the world by eating local, fresh and home grown. Put down that twinkie and pop! Pick up a hoe and educate yourself on the dangers of fast food and processed food! Blue jello? Come on! What part of that is natural, real food? But I dare you to eat a Christmas colored bean, like the one on the book cover. Ms. Kingsolver also shares about how rare it is to see/find true animal breeding in the modern world. She states in the book it was impossible to find modern resources and had to look to the past to find the answers. Nature has been bred out of the animals we eat. And she writes about it so eloquently! Sorry this review is all over the place! I was so excited to see Ms. Kingsolvers new book out; and it is on a subject that is near and dear to my heart. The narrative is incredibly well written. It is very inspiring.

This is a fascinating informative book about food

Published by Thriftbooks.com User , 15 years ago
It is possible to live off the land. The Kingsolver family are proof of that. They grew their own food for a year on a farm in Virginia's Applachian mountains. It only cost 50 cents a meal to feed the Kingsolver family of four for a year, and I found that to be amazing. It is much healthier to eat organic foods which are foods produced without chemicals. This is one of the main ideas of this insightful book. I love Camille's Kingsolver's contributions in this book. She is the college age daughter of the primary author. Camille's reflections about food are thoughtful, and her recipes sound delicious. I loved her essay about how she learned to love asparagus. I learned that asparagus is an excellent source of vitamin C, which I did not know before. There is a recipe in here for an asparagus mushroom bread pudding. I never thought of putting these ingredients together. Another interesting recipe in the book is one for zucchini chocolate chip cookies. The recipe sounds so unusual, I am tempted to try it. The recipe for pumpkin soup and sweet potato quesadillas sound yummy too. Everyone in the Kingsolver family contributed in this local food project. Barbara raised and bred turkeys, while her nine year old daughter raised her own chickens and provided the family with eggs for a year. They even made their own cheese. I also enjoyed the contributions of Steven L. Hopp in this book. He is a professor who teaches environmental science at Emory and Henry College. His short contributions in the every chapter are very insightful. He really compliments the main text written by Kingsolver. I enjoyed reading his thoughts about the popularity of agricultural education in public schools. This is a fascinating and informative book about food.

Back to the garden!

Published by Thriftbooks.com User , 15 years ago
Three hundred and sixty-eight pages, no pretty pictures, and it's about food? Yes it is, and it's fascinating. Written by best-selling novelist Barbara Kingsolver, her scientist hubby and teenage daughter, "Animal, Vegetable, Miracle" chronicles the true story of the family's adventures as they move to a farm in rural Virginia and vow to eat locally for one year. They grow their own vegetables, raise their own poultry and buy the rest of their food directly from farmers markets and other local sources. There are touching human stories here (the family's 9-year-old learns a secret to raising chickens for food: don't name them!) but the book's purpose is serious food for thought: it argues the economic, social and health benefits of putting local foods at the center of a family diet. As Kingsolver details the family's experience month-by-month, husband Steven adds sidebars on the problems of industrial agriculture and daughter Camille tosses in some first-person essays ("Growing Up in the Kitchen") and recipes ("Holiday Corn Pudding a Nine-Year-Old Can Make"). And it is all so well written! Kingsolver can veer way off topic -- wandering off into subjects like rural politics, even turkey sex -- and still, somehow, stay right on point. Her husband can say more in two pages than some professors I know can say in 200, and the daughter's writings... well I often couldn't tell who was writing what without checking for the byline. The book looks and feels great, too. The dust jacket has been pressed into the nubby texture of burlap. The pages have ragged edges, which makes them soft on your fingers. Reading this book, drinking my Phosphoric Acid Diet Coke and snacking on some Partially Hydrogenated Palm Kernel Oil Walt Disney World Hungry Heroes Yogurt Pretzels, I suddenly felt like I was a kid again, sitting in my bedroom in 1969 listening to that Joni Mitchell "Woodstock" lyric: "Time to get back to the land, and set my soul free." Now that song is stuck back in my head! Maybe it should have never left.

Animal, Vegetable, Miracle: A Year of Food Life Mentions in Our Blog 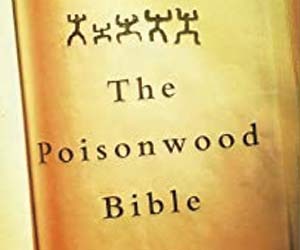 Today is Barbara Kingsolver's 65th birthday. The author's absorbing works of fiction, memoir, nonfiction, and poetry weave together evocative, lyrical prose with themes of social justice and environmental activism. Read on to learn more about her. 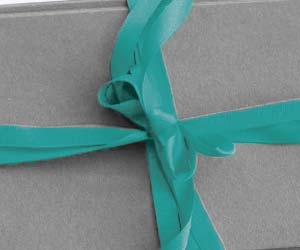 Valentine's Day can feel like a slap in the face to singletons. But International Book Giving Day works for everyone! Or you could even combine the two. This book-giving guide will help you find the perfect gift book for a host of characters in your life, maybe even that special someone.