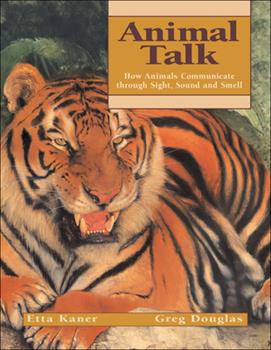 Animal Talk: How Animals Communicate Through Sight, Sound and Smell

(Part of the Animal Behavior Series)

A sea lion pup recognizes its mother's call, even with thousands of other noisy sea lions about. A vervet monkey shouts ?ha-ha-ha? to warn of an eagle passing overhead. A peacock fans its colourful tail feathers in a silent but impressive display to entice a peahen. Whether it's to attract a mate, warn of predators or mark their territory, animals share information in some extraordinary ways. Containing lots of interesting facts, activities and easy-to-do...

Published by Thriftbooks.com User , 18 years ago
Animal Talk is the most recent contribution to an excellent series of animal behavior and ecology books by Etta Kaner and is the recipient of the Animal Behavior Society's 2003 Outstanding Children's Book Award. The book presents animal communication by dividing communication up by context, including "Saying it with Sound," "Saying it with Smell," and "Body language." In each section, Greg Douglas' outstanding illustrations are paired with descriptions of appropriate examples, often including the method of communication (e.g. woodpeckers hammering on hollow logs to send sound over 1 km) and the possible functions of the behavior (e.g. calling for a mate or defending its territory). Also present in each section are two clever and engaging approaches: hands-on experiments that demonstrate a particular point (e.g. waving a paper towel near perfume to demonstrate why ring-tailed lemurs wave their tails during fights) and a "If you were a (animal species)" box, in which more facts are given for a particular species (e.g. "If you were a howler monkey, you'd live in the tropical rainforests of South America..."). Animal Talk does a nice job of including both familiar animals, such as tigers and dolphins, as well as less familiar animals, such as California ground squirrels and water striders. Each section has enough examples to effectively illustrate the point but not so many as to make it difficult to read. However, this book does include lots of information and for younger readers it may be best tackled one section at a time. Children readers consistently commented that they liked the pictures, the amount of information, and the experiments that they could try.
Copyright © 2020 Thriftbooks.com Terms of Use | Privacy Policy | Do Not Sell My Personal Information | Accessibility Statement
ThriftBooks® and the ThriftBooks® logo are registered trademarks of Thrift Books Global, LLC