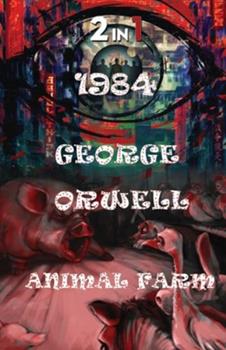 This description may be from another edition of this product. This edition features George Orwell's best known novels - 1984 and Animal Farm - with an introduction by Christopher Hitchens. In 1984 , London is a grim city where Big Brother is always watching you...

This book is written in Spanish

Published by Dave Anderson , 6 months ago
Don't buy unless you are fluent in the Spanish language!

Published by Stephanie , 11 months ago
I loved Orwell in high school when I first read 1984, and reading Animal Farm for the first time, as well as re-reading 1984, has reassured me he is still just as amazing as ever. I quite enjoyed both of these, though there are definitely some noticeable similarities between the two stories.

Worthy literature that transcends the genre of political fable

Published by Thriftbooks.com User , 13 years ago
This is a handsome republication of Orwell's two most renowned works, Animal Farm and 1984. Even if you're just looking for 1984, this edition is to be commended; it comes with a fine introduction by today's leading Orwell enthusiast, Christopher Hitchens, and the reward of including Animal Farm requires very little in the way of additional effort or expense on your part. At 80-odd pages, you may as well pick it up in the same volume, and you're virtually certain to be glad that you did. I'm not alone in being of a generation that was first required to read Orwell in my student days (Middle School, in my case.) It seems that there was a lot of literature churned out then, accessible to if not directly aimed at children, with the horrors of totalitarianism as its theme. In addition to reading Orwell, we were also reading Huxley, Bradbury, and Verne -- the youth-oriented John Christopher books being yet another example. The generation that lived through Nazism and Stalinism clearly wanted the younger set to be aware of the horrors that could be, and to remain on guard against them. It doesn't seem to be quite that way anymore. Orwell's name is invoked today, but often in trivializing contexts: "Big Brother" is now a brain-numbing reality show, and "Orwellian" is a convenient and often hysterically-applied charge to political opponents. Some complaceny does seem to be inevitable: we are now further removed from the days when the likes of Hitler and Stalin killed tens of millions. Still, regimes arise that are nearly as horrific on a local scale, from Pol Pot to Saddam Hussein to the Taliban, and are real enough that Orwell's book is no joke. Orwell deserves attention if for no other reason than to sensitize us to the bad form associated with invoking his name in a trivializing context. There was a political ad on Youtube last year from an Obama supporter that cast Hillary Clinton on a giant Big Brother-like screen. I'm not in the least a fan of Senator Clinton, but associating her image with those of 1984 -- as was also done in an infamous Apple Computer ad -- trivializes Orwell's message in a deplorable way. Orwell wrote his novel to warn against real dangers that his generation lived through, and which others might yet, not as a marketing ploy to be used in selling either computers or nearly indistinguishable democratic political candidacies. The main reason I am writing this review, however, is that re-reading Orwell in my 40's is a stark reminder that his novels are more than political parables, but are worthy literature. I hope that those reading these reviews will be aware of this, and not shut their minds to a rewarding literary experience. As a kid, I was able to perceive the pedagogical intent of these books, but less so was I able to appreciate the literary artistry. 1984 in particular passes the Nabokovian test of creating a fully believable, if terrifying, alternate world. Beyond that, on nearly every page, Orwell le

Classic novels in a beautiful edition

Published by Thriftbooks.com User , 13 years ago
Animal Farm and 1984 are classic literature. You've probably already read them. This edition presents them in a classic manner -- it is a lovely book, lovely dust jacket, and Christopher Hitchens does the intro. I usually find him funny and a little snarky, but in this intro, he is serious, high-minded, informative, and respectful. I wanted to read 1984 again, since so many people are kicking around the terms "Orwellian" and "Big Brother" regarding current politics. I'm so glad this is the volume I bought. I know I would have gotten the same *words* in a flimsy paperback, but this was a really nice read. I read both novels again. It has been... 20 years? Maybe longer since my first read-through. I'm a different reader than I was before. I've got that grisly Room 101 scene back in my head -- I had forgotten that one. Thanks, Mr. Orwell. This is a lovely edition. Treat yourself.

Published by Thriftbooks.com User , 15 years ago
Six decades later, his work still speaks to us. Orwell's Animal Farm & 1984 are important pieces of literature and should be required reading for all. Once read, one realizes the relevance of each story and is forever changed. The fact that they have combined both works into one book is just icing on the cake.

Published by Thriftbooks.com User , 15 years ago
Because most people will review the actual book(s), which in this case are classics and I feel do not truly need a review, I will review this edition. Having the two in one is useful if you, like me, have not read the two prior to purchase or if you are a fan of both books. They are bound handsomely and the dust jacket is simple and smooth. The introduction is by someone who is obviously enamored with Orwell, and it gives some insight to the work and history of Orwell, though is mostly unecessary as you could probably wikipedia the information. This is a nice edition and I felt it was a good choice for me.
Copyright © 2020 Thriftbooks.com Terms of Use | Privacy Policy | Do Not Sell My Personal Information | Accessibility Statement
ThriftBooks® and the ThriftBooks® logo are registered trademarks of Thrift Books Global, LLC