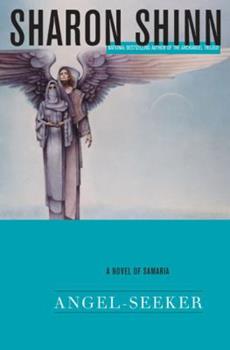 Angel-Seeker: A Novel of Samaria

Award-winning author Sharon Shinn returns to the "fascinating world"* of Samaria in a richly romantic tale that begins where Archangel left off. In that time, the women who craved the attention of angels were known as angel-seekers, a term used with awe by some-and scorn by others. Elizabeth was born to wealth, but circumstances forced her to live as a servant in her cousin's household. Determined to change her life, she travels to the town of Cedar...

Published by Thriftbooks.com User , 17 years ago
This book makes a great beach book. It follows each of the three narrators for a chapter or so at a time, providing the reader with plenty of places to stop without hurting the suspense. There is significantly less political and religious debate in this book than in the previous Samaria novels; instead, Shinn focused on the differences and similarities between two supposidly powerless women, Elizabeth and Rebekah, and the methods they use to affect their lots in life.GENERAL PLOT:Elizabeth, a pampered Mandavvi daughter turned ignored, embittered servent, takes a laundress job at the Angel hold of Cedar Hills in the hopes that she can catch the eye of an angel. Instead her hard work earns her the attention of a proment doctor who wants to train her as an assistant - a more satisfying and dignifying job than that of angel-seeker but one that has much less job security than that of the mother of an angel.Rebekah is an opinionated Jansai daughter about to be married off. Shinn is not very subtle in her distain for any culture that would cut women off from ouside contact and the Jansai life comes off sounding like Afghanistan under the Taliban. Rebekah's mildly discontent at her lot in life but can't imagine a different one. She rebels in small ways by arguing with her mother, sneaking out of her compound, and raising her younger brother to be kind and respectful to the women he will have complete authority over one day. Obadiah is an angel recently sent to Cedar Falls as an ambassador to the Jansai at Breven. He is lonely and frustrated to find that he has little standing or authority among the Jansai. When he is attacked and injured flying between Breven and Cedar Hills, he makes an emergency landing 3 miles from Rebekah's caravan. She sneaks out to help him and the two begin a secret, dangerous relationship. Back at Cedar Hills, it is Obadiah's injuries that prompt the doctor to request Elizabeth's assistance, also giving her a taste of Samarian politics as the hold leaders meet trying to figure out how to respond to the attack.OTHER THOUGHTS:Angel-Seeker is the 5th book in the Samaria series, for all that it occurs 3rd chronologically. It is a stand alone book in the sense that Shinn offers readers an unending number of characters ready to offer up exposition at every turn. If it has been years since you've read Archangel, you do not need to reread it before picking up this book. If you have never read a Samaria novel, however, I would recommend reading them in publication order. Not because Angel-Seeker needs it but because in it, certain aspects of Samarian life, land, and history are revealed that might lessen the suspense of the previous books.

Published by Thriftbooks.com User , 17 years ago
This series has always been a spell-binding read for me. The original trilogy was fantastic. From there it became a little repetitive. This latest addition was a welcomed change. One of my problems with previous novels was the extreme description of music. Shinn could spend an entire chapter describing the rise and fall of angel voices in song. Almost all her novels were concerned about the archangel. In this case, she concentrates on two women (not angels at all) and their perspectives. A Jansai woman and an angel-seeker. In both women she shows the trials and tribulations of misunderstood and persecuted women doing what they have to do to survive, truely live, and love. Shinn twines these two women's lives together in an unexpected and touching way. It's a long novel, but you will find it hard to put down. I finished mine in two days. Good reading!

Published by Thriftbooks.com User , 17 years ago
I must disagree with a couple of the reviews I have read here. Though the names of some of the characters in this book are familiar, the focus on the Jansai is fresh - and timely (they do not remind me of gypsies). The characters in this book are not simple-they are flawed, all of them, and the conflict has to do with our halting experiences as human-beings of free choice. The study of the Jansai women, who live in a cultural situation not unlike many in our own contemporary world, was very interesting to me. ( Why does a woman choose to stay in hell? When does safety become imprisonment?) I'm with Sharon - I want to read stories that tell me in the end, we can be honorable, we can work against what is unjust, we can make mistakes and find redemption and real love is worth sacrifice. But the choices in this book are not facile - the conflict not easily resolved. For those who read for meaning, there is much to mull over in this bit of work. I haven't got a whole lot of time, but this story was worth what I invested in it. Besides, I got a kick out of reading it.

Published by Thriftbooks.com User , 17 years ago
The settlers on the planet Samaria designed it so that the population would be divided into two races: mortals and angels. Just by singing the angels can cause the weather to change and have medicines fall down from the sky. In most cases an angel can only mate with a mortal otherwise the chance of birth defects is increased dramatically. For most women the highest honor is to give birth to an angel child and angel seekers flock to where they live in hopes of catching their eye.Elizabeth, a poor relation in her cousin's home, runs away to Cedar Hills where the angels are constructing a new community. She hopes to catch the eye of an angel, give birth to his child, and live the rest of her life in luxury. Rebekah, a member of the nomadic Jansai tribe, isolated from the males not of her family, stumbles across the injured Obadiah in the desert and nurses him in secret back to health. Although they fall in love, Rebekah refuses to give up her way of life and family for an angel but both she and Elizabeth learn that what they think they want is not really their heart's desire.For readers who follow the Samaria novels, ANGEL-SEEKER should be read after ARCH ANGEL and before JOVAH'S ANGEL'S. The Jansai will remind readers of gypsy clans crossed with women living in Purdah in the mid-east. There is enough romance in this novel to appeal to fans of this genre without disappointing those who prefer a solid science fiction tale. Sharon Shinn is a talented storyteller who makes world building seems so graceful and easy.Harriet Klausner

Published by Thriftbooks.com User , 17 years ago
Angel-Seeker (2004) is the fifth novel in the Samaria series, but is the sequel to Archangel in internal sequence. In the previous volume, Raphael was the archangel of Samaria. From his hold at Windy Point, he ruled over both humans and angels, changing traditions and corrupting his followers. Raphael married a Jansai women and took other Jansai as followers, even allowing them to enslave the Edori. Finally, Raphael denied any need to sing praises to Jovah and brought his followers to Mount Galo to wait out the entire day which had been appointed for singing the Gloria. After the sun went down, Raphael announced that he was their god and the thunderbolts sizzled out of the sky to destroy him and all who were with him. A great storm blew over Samaria, the skies opened up, rain fell in torrents, and the rivers began to flood. The next day, Gabriel lead the survivors in singing the Gloria and the skies calmed and peace returned to Samaria. Gabriel was chosen as the Archangel as foreseen by the oracles. He even convinced Rachel to marry him and become the Angelica. In this novel, the angels have abandoned Windy Point and have begun to build another city of angels in Jordana. Cedar Hills is unlike any other angel hold, for it is down on the plains, easily accessible by ordinary humans. Gabriel appoints Nathan to rule the new city and so Nathan takes Magdalena, his new bride, and a group of Monteverde angels there to reestablish proper relations with the landholders who have been slighted for so long. Gabriel has banned the enslavement of Edori and freed all the slaves. Now the Jansai are moaning about their economic difficulties. Since Nathan already has enough problems to handle, Gabriel sends Obadiah to handle relations with the Jansai. Shortly after moving to Cedar Hills, Obadiah flies to Breven and meets with Uriah, the acknowledged leader of the Jansai. After concluding his visit, Obadiah is flying back to Cedar Hills when, suddenly, he is shot out of the sky. Obadiah manages to crash into a small oasis, but hasn't got the strength to attend to his wounds. He is found there by a young Jansai woman, Rebekah, and she covertly tends him for several days while he recovers, but eventually she has to leave with her family. Shortly thereafter, Obadiah flies out of the desert, but has a relapse in mid-air and crashes once again, causing additional injuries. He has been seen falling out of the sky and is quickly found and placed in a trader wagon to be taken for treatment in Cedar Hills. Elizabeth is a young women who has come to Cedar Hills as an angel-seeker, a woman trying to become pregnant by an angel in order to bear an angel child. Mothers of angels are very well treated, but most pregnancies between angels and ordinary humans do not produce angel progeny. She has met Obadiah briefly and soon comes to know him rather well after she helps tend his wounds and then is assigned the additional duties of periodically checking hi
Copyright © 2020 Thriftbooks.com Terms of Use | Privacy Policy | Do Not Sell My Personal Information | Accessibility Statement
ThriftBooks® and the ThriftBooks® logo are registered trademarks of Thrift Books Global, LLC