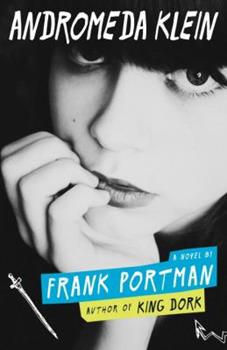 From Frank Portman, author of the cult classic King Dork that John Green says "will rock your world", comes a novel about Andromeda Klein, who has a few problems of her own. Her hair is kind of horrible. Her partner-in-occultism, Daisy, is dead. Her secret, estranged, much older and forbidden boyfriend-in-theory, has gone AWOL. And her mother has learned how to text. In short, things couldn't get much worse. Until they do. Daisy seems to be attempting...

Published by Thriftbooks.com User , 12 years ago
Fans of Frank Portman's successful first novel //King Dork// may be a little weirded out at the enigma of the title-character //Andromeda Klein//. No surprise here; tormented Andromeda deals with the bad hair, boyfriend and body issues like any other teen girl. But her other problems are far from the ordinary. In fact, they are far from anything in this physical realm. Among the many puzzles she has to solve, occult-obsessed Andromeda has to figure out these abstruse messages she believes are coming from her dead friend Daisy. Who is the King of Sacramento and why is he invading her dreams? Oh, and what does this text message mean? It comes from her on-again-off-again boyfriend Saint Steve, a.k.a. UNAVAILABLE. The first chapters of the book start off very much like the lead character - obsessive, hard-to-read and slightly overwhelming. Readers should take heart, stick with it and read on to reveal its part Nancy Drew, part The Craft storyline, droll wordplay and an Occult 101 crash course. When stripped of its mystic shroud, Portman's second novel reveals a highly digestible tale of a teenage girl who has communication problems on all levels (text messaging, the metaphysical and mishearing) and how she just tries to figure it all out. By the end of the book, Andromeda could possibly the best girlfriend you'll never have. Reviewed by Auey Santos

Published by Thriftbooks.com User , 12 years ago
Even better than "King Dork". A grabber from word one. Read this book!

Published by Thriftbooks.com User , 12 years ago
I read Frank Portman's first book, King Dork, and while it showed a lot of promise, I didn't love it. After just finishing Andromeda Klein, I'm happy to report that it's a simply stellar offering. The characters ring entertainingly and hilariously true, which was one of my major complaints about King Dork. The best advice I can give is to not get too bogged down in all of the references to the occult. It isn't necessary to Google what every foreign term means to really enjoy Andromeda and her story. Follow that suggestion and you'll be bummed you have to wait so long for Portman's next book -- just like me.

Realistic, quirky, relatable characters with an intriguing story and a lot of magic.

Published by Thriftbooks.com User , 12 years ago
I found this on the New Books shelf at my library on Friday, and after checking to see what sort of book it was I decided to grab it before anyone else could get it and read it immediately. I finished on Saturday and WOW! I love it. It's long, but it's totally worth it. The book as a whole is sweetly awkward, quirky, and fun-in-a-slightly-dark way (like a clown crying while telling jokes, for example). Some parts remind me a lot of my own high school (and middle school) experiences, which is probably why I identified with Andromeda so much-- she could be an alternate me, and Daisy could be an alternate version of my best friend from that time. It was a little bit spooky, but mostly it was very cool. I really liked Andromeda (not just because she's an alternate me). Even when she's acting crazy and ridiculous, mostly regarding boys and how she lets people treat her (read: like a doormat), I was interested in her life and what she was going to do next. I loved how she treated books like sacred things, and how she wanted to save the best books from being discarded from the library where she works. I also was really interested in how she preferred the more traditional sorts of occultism and shunned the more New Age, fluffier magic; it was very refreshing since so many new books seem to have only the Buffy-the-Vampire-Slayer-Wicca-magic-thing and I hate that. It's nice to see a character actually do something different from that for once, and as a bonus Andromeda doesn't even call herself a witch (she's an "occultist") nor does she cut herself and recite depressing poems to the moon (um, for example). Andromeda is refreshing in a non-occult way as well. Many times did I giggle when she misheard someone: "vacuum" for "bathroom," "Sylvester Mouse" for "some extra hours," and so on. And I liked how she'd say that the person meant to say "pagan" but said "bacon" instead, like it was their fault and not her hearing. She's quirky and funny while not being over the top and, yeah, I really liked her. The other characters were sort of negligible, and I still don't have any idea what the heck is up with her parents and I have no idea how Andromeda managed to stay with them for so long when they're NUTS. Some of the secondary characters are better than others, but the book is really about Andromeda and so I tended only to care about them in relation to her life. The book itself does move sort of slow, I suppose, but I didn't mind as I was too busy being proud that Andromeda knew so much about the occult when she was so young, enough to rattle off names and dates and numbers and so on when I can't even remember what I ate for lunch last Monday. It was much like watching my kid brother in a quiz bowl beating out the competition because he knew who the 15th President of the US was, or something. And since I was interested in the occult as a kid I actually recognized and understood most of it (though I never managed to make it through any of the actual books An

Published by Thriftbooks.com User , 12 years ago
Andromeda Klein is Frank Portman's new novel about an idiosyncratic occult-obsessed teenage girl and her weird little world. Andromeda-the-girl is authentic and relatable: she has body image issues, bad hair, boy problems, annoying parents, smudge-proof eyeliner that smudges, familiarly inept high school teachers, an aching self-awareness, and a sarcastic inner voice. However, if this were the extent of Andromeda, this would be a pretty run-of-the-mill cookie cutter sort of YA novel. Instead, Portman researches the heck out of occultism and provides us with the fruit of his labors: a unique journey through the life of a flat chested, no-assed, unfortunately coiffed, partially deaf, awkward teenage girl with a persistently active dead friend, a missing "boyfriend," and an impressive knowledge of classic occultism. Andromeda-the-occultist may be a little more alien to most people. She sees the Universe as full of sycnhes, messages, and demonic meddlings. As a teenage occultist, Andromeda's biggest defining characteristic is her obsession with magic(k). Unlike most books about teenage witches, Portman has taken the effort to make the material as authentic as possible. However, because Portman assumes correctly that the majority of his readers may not be equipped with the same obsession as Andromeda, he has no choice but to provide us with cursory lessons on the history of occultism. Some readers may find the beginning of the book to be a bit on the dense side, but once the fundamentals are established, the book becomes a little lighter (if just as weird and captivating). Basically, don't be discouraged! If the history of Tarot isn't your thing, you can skim those sections and fall in love with Andromeda just the same. If it is your thing, this is your lucky day! If it isn't your thing--but you're open to it--behold your latest obsession. Also, don't worry if you forget the significance of the various occult figures as they are all in the glossary. Lastly, anyone who is familiar with Portman--whether through his band, The Mr. T Experience, or through his debut novel, King Dork--should know that Portman is the type of guy that likes to play with words. Andromeda Klein does not disappoint. She delivers on word-play, and how! Being partially deaf, Andromeda mishears most of what is said to her. Sometimes her mistakes are hilarious and charming, and the most charming Andromeda words thereby become permanent parts of her vocabulary and are then used throughout the novel. But if you find yourself forgetting the definitions to Andromeda-lexicon, they are all listed in the glossary for easy reference.
Trustpilot
Copyright © 2022 Thriftbooks.com Terms of Use | Privacy Policy | Do Not Sell My Personal Information | Accessibility Statement
ThriftBooks® and the ThriftBooks® logo are registered trademarks of Thrift Books Global, LLC