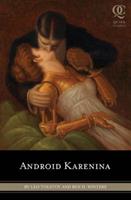 It's been called the greatest novel ever written. Now, Tolstoy's timeless saga of love and betrayal is transported to an awesomer version of 19th-century Russia. It is a world humming with high-powered groznium engines: where debutantes dance the 3D waltz in midair, mechanical wolves charge into battle alongside brave young soldiers, and robots--miraculous, beloved robots --are the faithful companions of everyone who's anyone. Restless to forge her...

Published by Thriftbooks.com User , 11 years ago
OMG! There are several reworked masterworks that incorporate new themes, and this was/is my first. The reimagined Anna Karenina introduces robot servants and sidekicks for an otherworldly magnificence. For a spellbinding take on Tolstoy, a writer whose Russian names could make most readers blow their brains out in frustration, this mash-up makes it all worthwhile to reread, now with a hip, dark, bigger scope than before. Kudos to Ben Winters for a job well-executed. These iron laws are true: the moral analogies to what is and isn't human is a better subtext to a classic than one could've imagined. If you know Tolstoy and probably struggled with him, grab ANDROID KARENINA for a delicious taste of revenge.

Messing with the Classics.....

Published by Thriftbooks.com User , 11 years ago
Winters, Ben H. and Leo Tolstoy. "Android Karenina", Quirk, 2010. Messing with the Classics.... Amos Lassen Can be great fun and that is exactly what we get with "Android Karenina". Instead of Russia under the Czars, we have an alternate reality where a culture of robots has been brought about because of a miracle metal, gronzium. Everything is now mechanical and there are humanoid robots that take care of their owners. The tale becomes one of science fiction and the entire story takes a new twist. We see Tolstoy's "Anna Karenina" completely differently. Winters keeps Tolstoy's pragmatic tone but changes the story by adding robots, cyborgs, androids, and a host of other familiar sci-fi elements. As Anna and Count Vronsky embark on their scandalous affair, they also have to battle a band of radical scientists intent on fomenting a revolution. The machines rebel and adultery is not of their problems. Like the original novel, this story follows two relationships: the romance of Anna Karenina and Count Alexei Vronsky, and the marriage of Konstantin Levin and Kitty Shcherbatskaya. Their passions could consume them but a secret cabal of radical scientific revolutionaries launches an attack on Russian high society and its high-tech lifestyle. Our four heroes are forced to retaliate with all they have. In this version, there's a war languishing between machine and master led by a covert group of scientific Tolstoy was very interested in the near future, where steam-powered engines and machines would "take over" and change life as humans knew it back in the 1800's and it is these specific ideas that brought this version into being. Ben Winters has written a new version but he prepared himself to do so. He stuck to the original and even used some of Tolstoy's ideas that he had when he wrote the original. Winters brings the story to the modern age so that all can both enjoy it and relate to it. It's great to have these modern versions of classic literature as a whole new audience can now appreciate them and I have a feeling that it will bring about a reading of the original. It is Quirk's Classics that makes this responsible and I do hope they continue to do so.

A great addition to the series

Published by Thriftbooks.com User , 11 years ago
Take one part great Russian literature, one part steampunk, and one part that same brilliant wit that made Pride and Prejudice and Zombies so much fun and you get Android Karenina. It's a perfect addition to the series. I could never get through the original Anna Karenina. I've no real patience for much of Russian literature, but I was able to go back and forth between this and the original and that made Anna Karenina tolerable. If you're stuck reading that for school, read this along with it and it'll go down smoother. Overall, a great book.

Published by Thriftbooks.com User , 11 years ago
I first became interested in Quirk Classic when like many others I read Pride and Prejudice and Zombies. I instantly became a fan after reading the second book published by them, PPZ "Dawn of the Dreadfuls". My biggest flaw with the original PPZ was that it was very obvious where parts were added into the original text. Android Darenina very easily blurs the line between the original and the newly added robot version. The two stories blend flawlessly making a very interesting tale of a modern Russia filled with robots, affairs, and rebels seeking scientific freedom. The story flows and keeps the readers attention easily, despite a rather long list of complicated Russian names which the author constantly switches between first, middle, last, and nicknames. The name scheme would be my only big complaint. However this book brings a classic back to life in a relatable way so that a new generation can be introduced to a historic novel. If you are a fan of Quirk Classic this is a must buy!

Fans of previous books in this series should enjoy

Published by Thriftbooks.com User , 11 years ago
Quirk Classics is at it again, guys and gals. From the creators of Pride and Prejudice and Zombies, as well as Sense and Sensibility and Sea Monsters, comes the next irreverent look at a classic story brought back to life. As in the original version of this fantastic novel, we follow two love affairs of monumental proportions: Anna Karenina with Count Alexei Vronsky and Nikolai Levin with Princess Kitty Shcherbatskaya. These two unforgettable couples yearned and fought for true love in the 19th century. However, in the first telling of this brilliantly-crafted novel, neither couple had been in possession of copper-plated machines and robotic butlers. In this new version, there's a war brewing between machine and master. A covert group of scientific revolutionaries band together and go on the attack. Battling against Russian high society, the group tries with all their might to take the legs out from underneath the wealthy debutantes. Our brave and courageous couples must use everything they have available, including the sleek and mean ultra-human cyborgs, to beat back the enemy and re-gain control of their steampunk-inspired world. Anna's nightmare (which is a famous scene from the classic book) seems to have been the inspiration for this metallic world that the author has created. In her dream, the hammering of iron referred to Anna being crushed and beaten down. In addition, Tolstoy was very "into" the near future, where steam-powered engines and machines would "take over" and change life as humans knew it back in the 1800's. These specific ideas seemed to me to have been the building blocks for this new "Jetsons" version of the classic tale. Ben Winters, who was the co-author of Sense and Sensibility and Sea Monsters, certainly - once again - did his homework. Sticking completely to Tolstoy's story, as well as using hidden "points" Tolstoy made while writing the classic tale, he also used his overly creative imagination to bring the book into the 21st century and open the door for teenagers to enjoy one of the best writers ever known. I would hope that after a fun reading of Android Karenina, the reader will be inspired to pick up the original text. Quill says: It's nice to see that these updated classics are introducing a whole new audience to some of the best known writers in the history of literature, and fans of previous books in this series should enjoy this newest offering. For devoted followers of the original classics, you may have a hard time accepting Anna, er, Android Karenina.
Copyright © 2022 Thriftbooks.com Terms of Use | Privacy Policy | Do Not Sell My Personal Information | Accessibility Statement
ThriftBooks® and the ThriftBooks® logo are registered trademarks of Thrift Books Global, LLC