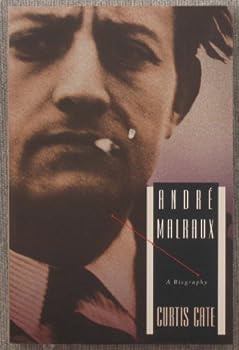 Explores the French author's need to live life heroically, championing such causes as the French Communist Party, aiding the French Resistance, and serving in the Republican Air Force during the Spanish Civil War.

The Sum Of His Actions.

Published by Thriftbooks.com User , 18 years ago
"A man is the sum of his actions, of what he has done, of what he can do, nothing else." Given this quote by Andre Malraux, one is left with a sense of wonder, after reading this fascinating biography. As I contemplate the man's actions and involvements, over the course of his lifetime, I try to come up with a clear definition of who he actually was. Malraux, a man who made such an impact on French culture and on the political scene of his time, was a novelist, critic, journalist, archaeologist, financial speculator, and political figure. He was a complex man, and an adventurer. In this extremely readable biography, Curtis Cate attempts to correct the image of Malraux as a heroic, committed activist and intellectual. Cate, however, does not delve deeply enough into how the political, cultural and social environment of the times impacted Malraux, and the biography comes up short as a consequence. I was left bewildered, occasionally, without an understanding of why Malraux made some of his choices, especially in politics, and Cate appears to be equally at a loss. The author covers a wide spectrum of material in this biography, and though he fails to draw credible conclusions in many instances, the nature of his subject alone makes reading this book an extraordinary experience.Andre Malraux was born in Paris and was raised by his mother and grandmother. His parents were divorced. His father committed suicide in 1930. Malraux studied Oriental languages at the Ecole des Langues Orientales, although he did not graduate. At the age of 21 he left for Cambodia with his wife Clara Goldsmith. He was arrested and almost imprisoned for stealing a bas relief from the temple at Bantai Srey. The book details this "youthful" archeological expedition. In fact, this trip probably sparked the seed of revolution against colonialism in the young man.After returning to France, Malraux became highly critical of the French colonial authorities in Indochina and in 1925 helped to organize the Young Annam League and founded the newspaper "Indochina in Chains." He may also have worked for Kuomintang in China in 1927. On his return to France he published his first novel, "The Temptation of the West" (1926). This was followed by "The Conquerors' (1928), "The Royal Way" (1930) and "Man's Fate" (French: La Condition Humaine) (1934), a powerful novel about the defeat of a communist regime in Shanghai and the choices the losers have to face. He won the 1933 Prix Goncourt of literature for the latter novel. In the 1930's Malraux also joined archeological expeditions to Iran and Afghanistan. Malraux's anticolonial involvement in the Chinese, Spanish and Vietnamese revolutions, inspired a series of novels that propelled him into the limelight as a writer of great intelligence and insight. This very intelligence, along with his participation in the political upheavals of the time, make Malraux's story so gripping.The book also delves into Malraux's service with the Republican Air Forc
Trustpilot
Copyright © 2022 Thriftbooks.com Terms of Use | Privacy Policy | Do Not Sell My Personal Information | Accessibility Statement
ThriftBooks® and the ThriftBooks® logo are registered trademarks of Thrift Books Global, LLC