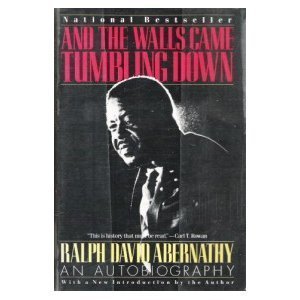 And the Walls Came Tumbling Down: An Autobiography

Originally published in 1989, this beautifully written autobiography of the Rev. Dr. Ralph David Abernathy--Martin Luther King Jr.'s partner and eventual successor--not only tells his own story but... This description may be from another edition of this product.

The Most Powerful Civil Rights Collection of stories

Published by Thriftbooks.com User , 18 years ago
I have ever read- Ralph David Abernathy gave a beautiful window into the realities of America's struggles with racism. He and Martin Luther King's unique experiences all over America are scintillating. Having been raised by a military father all over America- a few places and cultures I had observed were in this book. Military housing was integrated 5 years before I was born, so my first experiences of obvious racism were when I was a young adult in civilain environments. I read this when it first came out, for the local TV station in Detroit (WB). At the time this book came out, I was to interview Mr. Abernathy. I started to brief "And the Walls Came Tumbling Down" - I could not put it down until I finished it in 36 hours. He canceled his tour to Detroit, and then died shortly after this book was published. I was very saddened this book did not become embraced more fully by the African American community- as Mr. Abernathy's writing is a powerful diamond on the crown of struggles for goodness. Ralph David Abernathy was truly a holy man for the 20th century.

Published by Thriftbooks.com User , 19 years ago
Ralph Abernathy wrote his life's story warts and all. He also spoke honestly about his dear friend, Doc and his private life. Doc was Martin Luther King Jr. and a lot of people reacted almost violently to the revelations in the book. Abernathy was called a traitor, a Judas and an Uncle Tom. He was also accused of being senile or insane with jealousy of Dr. King's memory. Sadly, with all the name calling people forgot or ignored the fact that it's a good autobiography and a valuable edition to the historical record of the Civil Rights movement.

Not what you've been led to believe

Published by Thriftbooks.com User , 21 years ago
When this first came out around 1990, stupid rumors abounded that Dr.King's right-hand-man and surrogate brother had written a sleazy text about Dr. King's sex life. This bunch of hogwash and the cruel responses by people who beleived the hype drove Dr. Abernathy to his grave! This is actually a very good book filled with interesting anecdotes about Dr. Abernathy's years as a soldier in the Civil Rights movement. However, he pulls no punches regarding the infighting that destroyed what was left of the movement after Dr. King's death. This is an important historical memoir by one who was certainly there.
Trustpilot
Copyright © 2022 Thriftbooks.com Terms of Use | Privacy Policy | Do Not Sell or Share My Personal Information | Accessibility Statement
ThriftBooks® and the ThriftBooks® logo are registered trademarks of Thrift Books Global, LLC