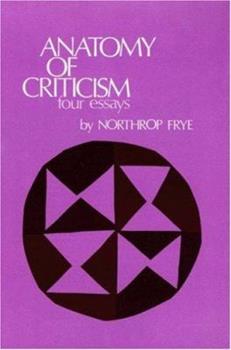 Striking out at the conception of criticism as mere opinion or ritual gesture, Northrop Frye wrote this work on the assumption that criticism is a structure of thought and knowledge in its own right. In four essays on historical, ethical, archetypical, and rhetorical criticism, Frye reconceives literary criticism as a total history rather than a linear progression through time.

Published by Patricia Dilgard , 3 years ago
All of these reviews were written 20 yrs ago. (Except one written 15 yrs. ago). The literature departments in universities have been replaced by ideological fanatics, They are only interested in literature, except as a tool to project their political ideas, Marxism, Feminism, Queer Theory, etc. etc. etc. Instead of criticism we have OPINIONS posted on Amazon "." I like this book because....." " I don't like this book because...". " Example: I didn't like this book because the detective is always smoking. Real review by reader dissing Raymond Chandler. Guarantee you won't find this book in a library everywhere.

Published by Thriftbooks.com User , 17 years ago
In this classic work Frye takes a long view of literature, and discerns deep structural patterns. In Essay I he charts a progression in the history of western literature from myth through romance through realism to irony in which the hero becomes increasingly human. Essay III envisions different archetypal literary forms (comedy, romance, tragedy, satire) as continuous phases of a central quest-myth that recurs throughout the history of western literature, and lays out a rich and resonant typology of their symbolism. I found Essays II and IV, which are concerned with forms of symbolism, and genres, respectively, to be somewhat muddled, and much less insightful than the other two essays. Bottom line- if you read Essays I and III you will gain a new and lasting insight into the stories you come across and the way they work, be they novels, films, plays or poetry. Highly recommended as an antidote to the facile post-modernism and literary identity politics that most English departments are awash in these days. For those reading the book, I also recommend googling Everett Frost's recreation of the mandala diagram of Essay III that Frye left out of the manuscript.

Most important work of literary theory in the 20th century

Published by Thriftbooks.com User , 21 years ago
Whether you agree with him or not, there's no denying that Northrop Frye is the most important literary critic from North America-- and quite probably the most influential English- language critic of the 20th-century. His influence, I should add, is not limited to literary scholarship, but has been felt in other disciplines as well (e.g. Hayden White's classic historiographical study "Metahistory").Although he's written many books on a host of specific subjects, "An Anatomy of Criticism" is Frye's magnum opus. In it, he outlines a general theory of literature-- what it is, how it is structured, and how it "works". These questions are answered in the volumes four essays, each of which approaches the subject from a different theoretical perspective: (1) a theory of modes", (2) a "theory of symbols", (3) a "theory of myths", and (4) a "theory of genres". Although these theories are not 100% unified into a larger structure, they are interrelated and complementary-- and, taken together, they do form what I believe can be called a (multifacted) "general theory of literature".The book begins with a "Polemical Introduction". Here, Frye makes an argument that is at once simple and profound. For too long, he claims, literary criticism has revolved primarily around matters of taste, with critics pronouncing judgement on the relative merits of different authors and works. Frye believes that this has prevented literary criticism from really coming into its own as a serious scholarly activity-- and he wants to make literary scholarship a genuinely scholarly subject. The way to do this, he argues, is by eschewing any criticism whose goal is to attribute "merit" or "value" to works-- to say that they are good or bad. Instead, the true literary scholar needs to see himself as a scientist and to survey the field of literature as a whole, taking it on its own terms, and describing what seem to be the basic principles, structures, and unstated "laws" governing it. An important point here (and one that I think is especially compelling) is that Frye insists that literary scholarship needs to derive its understanding of literature from literature itself-- and not from other fields like psychoanalysis (e.g. Freudian/Jungian interpretations), from history (biograhical criticism), politics (Marxist criticism), etc. "An Anatomy of Criticism", Frye states, is his attempt to do just that-- to derive a theory of literature (or rather four complementary theories of literature) from literature itself, taking into account that literature, understood broadly, is work consisting primary of words, arranged in such a way as to create structures such as we call plots, characters, images, themes, etc. In the first essay, the theory of modes, Frye articulates a theory of literature in terms of its level of realism, noting that this can exist in several degrees, which Frye expresses in terms of characters' relation of power to ordinary people and to the world. On the one extr

It's dark in here.

Published by Thriftbooks.com User , 21 years ago
You're in the bookstore and you've pulled this book off the shelf when the lights go out. You call out, "Anybody here read 'Anatomy of Criticism?' Clerks and customers volunteer opinions, some of them informed and well-meaning. Still, you wish you could read the darn blurbs. These are from the back cover of my copy of 'Anatomy of Criticism:'...simply overpowering in the originality of its main concepts, and dazzling in the brilliance of its applications of them. Here is a book fundamental enough to be entitled 'Principia Critica.' -- Vivian Mercier, 'Commonweal'...an attempt to give 'a synoptic view of the scope, theory, principles, and techniques of literary criticism,' ...the book is continuously informed by original and incisive thought, by fine perception, and by striking observations upon literature in general and upon particular works. -- 'Modern Language Review'Does literary criticism need a conceptual universe of its own? Professor Frye has written a brilliantly suggestive and encyclopedically erudite book to prove that it does; and he has done his impressive best to provide a framework for this universe. His book is a signal achievement; it is tight, hard, paradoxical, and genuinely witty... [Frye] is the most exciting critic around; I do not think he is capable of writing a page which does not offer some sort of intellectual reward.' -- Robert Martin Adams, 'Hudson Review'This is a brilliant but bristling book, an important though thoroughly controversial attempt to establish order in a disorderly field. ...Mr. Frye has wit, style, audacity, immense learning, a gift for opening up new and unexpected perspectives in the study of literature... It would be hopeless to attempt a brief summary of Mr. Frye's dazzlingly counterpointed classifications.' -- Thomas Vance, 'The Nation'The above were written in the mid-1950s when the book first came out. Reaction to 'Anatomy of Criticism' continues. Some readers are honked off by Frye's notion of looking at literature as if it were a particular world with its own structures. Frye worked to develop coherent ways of thinking about books that went beyond value judgements grounded in social fashion or individual taste. He hoped to get criticism away from bickering over rankings of "greatness" and pronouncements of worth based on political or religious criteria. Some of Frye's critics say his approach to criticism isn't enough of a science -- that he's optimistic about human nature, and he sees entities and landscapes that aren't real. That's certainly true. Others say his approach isn't artistically appreciative enough, that he's incapable of enjoying a butterfly till he's gassed it and filed it in the proper drawer. That's certainly hooey. Frye was as delighted and informed and transformed by his reading as the rest of us. It's just that if he saw a great system of thought in, say, the work of poet William Blake, he went on to show the extent of this thought, revealing how Blake's work carried echoes

indespensible for anyone who thinks about literature

Published by Thriftbooks.com User , 22 years ago
I spend quite a lot of time thinking about literature and analyzing it myself and was very attracted to ideas about myths and archetypes. Reading Frye was a constant journey of "I almost knew that!" and "I knew that, but I didn't KNOW that I knew it!" The book turned around and cleared up my thinking about literature. In my literature class the day after I started to read this book, I felt myself bursting with excitement and the new understanding I had just through looking at a play within its "mode" of literature and its broader literary category. Frye's theory is comprehensive and unified, clearly explained and illustrated, and perfectly sensible. It fails to have practical application only if the reader's understanding isn't complete enough to allow him to apply it for himself to the works he is studying.

The World on the Head of a Pin

Published by Thriftbooks.com User , 23 years ago
As any student of English literature knows, a life without reading Frye is a life with eyes closed to a multitude of possibilities. References to Frye drove me to him; Why else would the world of critical analysis place him in such high esteem by quoting him if not for his ability to make sense of literature? But for all his ability to codify and characterize modes, symbols, myths, and genres, his text seems calls upon the scientific efforts of new criticism. This seems particularly ironic since Frye often demurs the new critical effort. His call for a universal criticism also seems farfetched, primarily because a multiplicity of individual approaches prevents a singular opinion from emerging. However, for the most part, Frye's work both stuns and astounds, forcing the reader not only to understand literature in terms of proto-generic forms, but also to pursue Frye's conjectures into the realms of literature beyond his 1957 publication date. An extensive reading list (from the Greeks to the early twentieth century) assists Frye in his pursuit of the illusive patterns of literature, as well as an encyclopedic concern for definitive examples. Previous definitions of generic categories fall victim to Frye's ruthless pursuit of new possibilities, splitting drama and poetry into more easily digestible shards of subtlety. Frye's use of archetypes proves particularly fruitful, infusing the every-day (or perhaps modern-day) interpretations of lifeless texts with an alternative possibility of generative renewal for the observant, critical thinker. All in all, Frye's text proves well worth the time and effort.
Trustpilot
Copyright © 2022 Thriftbooks.com Terms of Use | Privacy Policy | Do Not Sell My Personal Information | Cookie Preferences | Accessibility Statement
ThriftBooks® and the ThriftBooks® logo are registered trademarks of Thrift Books Global, LLC