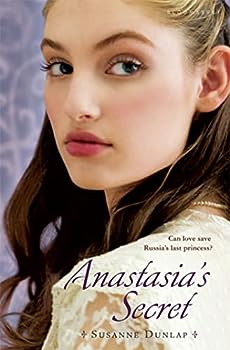 When Princess Anastasia Romanov's life is torn apart by revolution, she and her family are exiled to Siberia. As their captivity stretches out, the threat of death by firing squad grows stronger. But... This description may be from another edition of this product.

Published by Thriftbooks.com User , 12 years ago
Anastasia's Secret was not what I was expecting. That's not to say it wasn't good, because it was. I love historical fiction and Anastasia's Secret is at the top of my list. Susanne Dunlap did an amazing job with it! This is my first Susanne Dunlap book and I really liked her writing style. It was super east to read and it helped make the book seem a lot quicker. The writing was just beautiful and the story was even better. The characters were definitely the best part of the book. The Romanov family was full of very likable people and there friends were great too. I felt so bad for all of them and I hated all the horrible things that they had to go through. Sasha was also really great, but in a completely different way. =] I have to say that the plot dragged a bit. There was a lot of talk and not a lot of action. I had some trouble getting through the parts where nothing was happening but I did manage and enjoyed the book tremendously. I won't tell you how it end, obviously, but I will say that it is historically correct. If you know the story of the Romanov family, then you know how it ends. It wasn't the ending I was hoping for but I was glad Susanne Dunlap stuck with what really happened. Overall, Anastasia's Secret is definitely on my list of recommendations for fans of historical fiction. Susanne Dunlap succeeded in writing a fantastic story that practically transported me to Russia. You know it's a good book when you feel like you are a part of it!

A romantic and heartbreaking tale of Russia's last grand duchess.

Published by Thriftbooks.com User , 12 years ago
As the youngest daughter of the last Tsar of Russia, Anastasia had a very sheltered and isolated childhood. So when at twelve years old she meets Sasha, a young soldier, in the garden of her palace, she is intrigued - he is very different than anyone she is permitted to be friends with. But soon he must leave to fight in World War I. Anastasia is later reunited with him while helping to care for the wounded soldiers, and now that she is fourteen, hopes he will see her as a young woman, and not a child. But everything in Anastasia's world is about to change forever. In the aftermath of a costly war, the people of Russia are increasingly angry with their ruler. She must grow into a young woman as everything around her falls apart. After a revolt by the people, Anastasia and her family lose their wealth and status, and are eventually exiled to Siberia. In these dark days, Anastasia's growing love for Sasha still brings her hope and joy. But there is little hope for their future together. Anastasia's Secret is a romantic and tragic story of what might have been, and brings Anastasia to life as a regular teenager with hopes and dreams, experiencing all the emotions of a teenage girl, although she grew up in a time very different than our own. It was hard to read the book at times knowing what the outcome would be and I so wished it could have ended differently. For readers who love historical fiction or who are fascinated by the Romanovs, I highly recommend this book, but be forewarned, you may need tissues at the end. Disclosure: Review copy provided by publisher

a tender romance about a young Russian duchess

Published by Thriftbooks.com User , 12 years ago
Nearly a hundred years ago the Czar of Russia was forcibly removed from his throne and taken prisoner by Russian soldiers; at that time his youngest daughter, Grand Duchess Anastasia Romanov, was sixteen. From being the ruling family of the country, the Romanovs slipped into increasingly tight imprisonment though never for one moment did the parents or their five children lose their deep love for each other. It was a tragic circumstance for a girl so enchanting and full of life that her story and its legends have been told again and again. Now in a particularly touching way, Susanne Dunlap has written a gentle romance for the brave Anastasia: a young man Sasha of plain birth who gives her his balalaika and shows her the country's poverty. He meets her secretly in gardens and cellars and even in the snows of Siberia and tries to warn her when her family is in danger. The Romanov family is as close and loving as any large family can be today; as they are dispossessed of their titles, palaces, jewelry, even toys and books, their close servants and even proper food and heat, they cling together bravely. In the midst of this tragedy, Anastasia is concerned to keep the existence of Sasha from her sisters who begin to guess. A beautiful book about a young girl from a great fallen family who, in the midst of her worry for them and the privations they suffer, finds a love of her own. I am the author of MARRYING MOZART and CLAUDE & CAMILLE: A NOVEL OF MONET.
Trustpilot
Copyright © 2022 Thriftbooks.com Terms of Use | Privacy Policy | Do Not Sell or Share My Personal Information | Accessibility Statement
ThriftBooks® and the ThriftBooks® logo are registered trademarks of Thrift Books Global, LLC