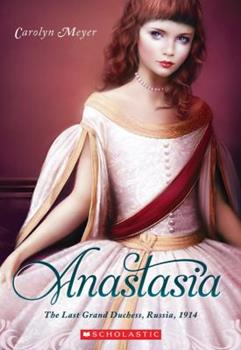 Award-winning author Carolyn Meyer's ANASTASIA is back in print with a gorgeous new package!Anastasia is the youngest daughter of Czar Nicholas II, ruler of Russia. Anastasia is used to a life of luxury; her major concerns are how to get out of her detested schoolwork to play in the snow, go ice-skating, or have picnics. She wears diamonds and rubies, and every morning her mother, the princess, tells her which matching outfit she and her three sisters...

Published by Thriftbooks.com User , 4 years ago
The first book in the series I have read. This book tells the story of a young girl (a Russian Duchess) and the joys and sorrows she went through. Also the creepy man Rasputin who visits them.

The Life and Times of Anastasia, the Last Grand Duchess

Published by Thriftbooks.com User , 17 years ago
The year is 1914, and 12-year-old Anastasia Nicholaievna Romanov is the last Grand Duchess of Russia, having been the youngest of three sisters, and the last female born before her younger brother, Alexei. Anastasia and her family lead a very luxurious life. Have the privilege to travel to their various castles, and being able to eat lavish foods at every mealtime. The biggest concern weighing on Anastasia's mind would have to be whether or not she'll be able to complete her lessons without dying of boredom. However, as time passes, Russia becomes involved in World War I, and the people of Russia become greatly dissatisfied with how the Tsar - Anastasia's Father - is running things, and by 1917, he has abdicated the throne, and the Romanov family is exiled to Siberia, where they are treated unkindly, and guarded at all times. This is how the diary ends. I have adored the story of ANASTASIA ever since I saw the cartoon movie years ago, and I found the effort that Carolyn Meyer put into this book marvelous. Anastasia was a young girl like all of us, who had many of the same worries that girls have today. I really enjoyed the many pages of "real" photographs of Anastasia and her family, as well as the many informational pages of the way her life truly ended. I only wish that the movie I saw had been true, and that Anastasia had lived to grow up happy and healthy, as opposed to having her life cut short by gunmen. Overall, this was a marvelous book that will satisfy anyone who is interested in the story of Anastasia, the last Grand Duchess of Russia. Erika Sorocco Book Review Columnist for The Community Bugle Newspaper

Published by Thriftbooks.com User , 21 years ago
"Anastasia: The Last Grand Duchess" was a great book that gave a much more realistic version of this young girl's life than the movies made about her!12-year-old Anastasia has a wonderful time with her family, playing with her younger brother and father, reading her sisters' diaries, and visiting relatives. However, after her 13th birthday, her carefree life begins to change, when war breaks out with Russia. Continuing until she is almost 17, you will be amazed at the changes, generally not for the better, that take place in this teenager's life.I really learned a lot about Anastasia, who lived not very long ago. The only thing I'd say against this book was that some years of her life were covered pretty briefly, but other than that, this first funny, and then serious novel was a great read! I'd definitely recommend it for ages 11 and up - I think this exciting book would appeal to a wide audience!

Published by Thriftbooks.com User , 21 years ago
I read this book this summer and thought it was great! I just couldn't put it down. It's a great story, and the historical note at the back has lots of great pictures of Anastasia and her family, her palaces, even one of the real Rasputin (and believe me, he's scary looking!) It makes you feel like you are right there in Russia. A really good book!

Published by Thriftbooks.com User , 21 years ago
I have always been intrigued by the mysterious deaths of Russia's last imperial family, the Romanovs. So I quickly took advantage of my chance to read this book. It doesn't portray Anastasia as a historical figure, but as a girl with emotions and opinions and faults. The first third of twelve-year-old Anastasia's diary is full of luxury and comfort, depicting her life as the youngest Russian princess in a world of privilege. However, the book becomes dark when the common population of Russia begin to lose their faith in Anastasia's father, the Tsar. The book realistically depicts Anastasia's loneliness and fright when she and her family are forced to move out of their palace and into a much smaller house, where the family is abused by rude and drunken soldiers. The book also mentions Grigory Efimovitch, better known as Rasputin, whose disastrous advice led to the downfall of Anastasia's family. She is the only member of the family that suspects that Rasputin (or Father Grigory, as he is called in the book) is not completely interested in her family's well-being. A great read, in my opinion. If you're interested in the subject of Anastasia, this is an excellent book to read to learn more about this young Russian archduchess.

Anastasia not as a royal figure but as a young girl.

Published by Thriftbooks.com User , 21 years ago
What I liked best about this book was that, through a fictional diary kept by Anastasia Romanov, youngest daughter of the last tsar of Russia, was that is showed her not as a royal figure but just as a girl with feelings and concerns. The book begins in 1914. Twelve-year-old Anastasia and her family lead lives of luxury in an elegant palace and enjoy frequant holidays. Anastasia's biggest concern is learning her lessons in time. But as the years go by, and Russia becomes involved in World War I, the Russian people become increasingly dissatisfied, and in 1917, Anastasia's father is forced to abdicate, and the family is exiled to Siberia. The diary ends just two months before seventeen-year-old Anastasia and her family are executed by revolutionaries. The book, except at the very beginning, was really sad, but it brought the life the end of the Romanov dynasty and young Anastasia's final years. I highly reccomend it if you enjoyed any of the other books in this series.
Copyright © 2022 Thriftbooks.com Terms of Use | Privacy Policy | Do Not Sell My Personal Information | Accessibility Statement
ThriftBooks® and the ThriftBooks® logo are registered trademarks of Thrift Books Global, LLC