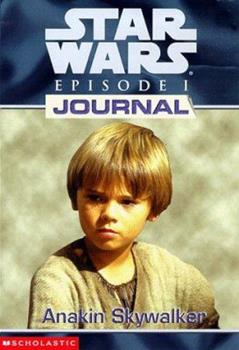 Provides the tale of Anakin Skywalker's early years when he left his homeland of Tatooine behind in order to join the Jedi ranks and begins the journey of his life that eventually led him to become Darth Vader.

Published by Thriftbooks.com User , 16 years ago
I LOVED this book. For anyone who wants to read about Darth Vader's [or you could say Anakin's] life at 9 years of age, then this is the book for you!

Published by Thriftbooks.com User , 18 years ago
The book I read was Star Wars Episode 1 Journal, by Todd Strasser. This book is about a boy named Anakin Skywalker who was a slave on a planet called Tatooine. One day a warrior called a Jedi appeared and told him he was to be a Jedi too. Before Anakin could be trained to be a Jedi he must prove himself first. Anakin proves himself and is set free from slavery for training to be a Jedi. My favorite part in the book was the thirteenth chapter called "The Battle." It was about how Anakin had hid in a starfighter, but accidentaly engaged himself in a war. Anakin was just looking for a safe place to hide during the battle and accidentaly took off into nother battle in space. Anakin had no idea what he was doing. Unaware of what he was doing, he faught off most fighter and distroyed the enemy's control base. I enjoyed this book alot. It was very discriptive and had a great story line. I chose this book when I was a Star Wars fan, but I never took the time to read it until now. I am glad I read this book and I think you shoud read it too if you like Star Wars.

Published by Thriftbooks.com User , 21 years ago
I Thought it was an overall good book, it had many exciting parts, and some were funny too. In the book the five things I liked were Anakin Skywalker, Darth Maul, The suspense, The battle for Naboo, and Queen Amidala. Five things I did not like about the book were Jar Jar Binks, Sebulba, Darth Siduous, Yoda, and Mace Windu. I really enjoyed the book, in fact it was so good I couldn't put it down, and I read it in four days. I really enjoyed it and I think someone who is adventurous, and someone who likes science fiction would like this book, and won't put it down.If you read it I hope you enjoy it as much as I did. Brian

Published by Thriftbooks.com User , 22 years ago
This book give's you the viewpoint of Anikan Skywalker,of The Phantom Menace. I highly recomend, it show's how he felt about certain characters, and things such as Qui-Gonn Jinn's death, and how he feel's about Obi-Wan and the Jedi Counsel. I also recomend The Jedi Apprentice books.

Published by Thriftbooks.com User , 22 years ago
This told about what happened in the new Star Wars movie, Episode I, through a journal by nine-year-old Anakin Skywalker. I reccomend this book if you liked the movie. It expands on his character and is a fun book to read.
Copyright © 2020 Thriftbooks.com Terms of Use | Privacy Policy | Do Not Sell My Personal Information | Accessibility Statement
ThriftBooks® and the ThriftBooks® logo are registered trademarks of Thrift Books Global, LLC