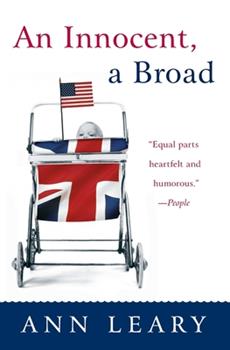 An Innocent, a Broad

When Ann Leary and her husband, then unknown actor-comedian Denis Leary, flew to London in the early nineties for a brief getaway during Ann's second trimester of pregnancy, neither anticipated the adventure that was in store for them. The morning after their arrival, Ann's water broke as they strolled through London's streets. A week later their son, Jack, was born weighing only two pounds, six ounces, and it would be five long months before mother...

Published by Thriftbooks.com User , 17 years ago
Ann Leary's autobiographical account of her sons birth abroad, amidst the rise of her husbands comedy career, is well-written, interesting, and very truthful. Unlike some autobiographical stories, Ann doesn't attempt to present herself as some sort of hero, and she doesn't portray anything that happened to her in a way that is self-serving. She tells it like it is. And it is a very interesting story. From her son's surprise appearance, to her unexpected life abroad, Anne's story is intriguing, sometimes sad, funny, and sometimes happy. I would expect that anyone who's ever had a premie, or anyone who's lived abroad, would especially enjoy her story, but to the rest of us, it's still a good read.

A definite must read!

Published by Thriftbooks.com User , 18 years ago
I was just lamenting that it had been awhile since I read a truly good book, when I picked up An Innocent, A Broad by Ann Leary. What a fabulous book! I couldn't put the book down once I started. Ann Leary is a terrific, no-nonsense writer. She is humorous and sarcastic, able to poke fun at herself at a very serious time of her life. I laughed out loud several times while I was reading it. I recommend it for anyone - but especially for parents, who will reflect on their own experiences with a newborn, especially a preemie.

An Absolute Delight --- From Start to Finish

Published by Thriftbooks.com User , 18 years ago
A self-described "master fretter," the pregnant Ann Leary worried over her first-born but could never have predicted what was in their future: the delivery, three months early, of two-pound, six-ounce Jack in a distant land. A quick jaunt to England, where Ann's husband, comedian Denis Leary, has a gig, is suddenly interrupted when Ann's membranes rupture. Ann, who once believed she was the type of person who would take charge in a disaster --- leading people from a plane crash, for example --- found that she was "in fact, the shrieking, running-into-the-burning-wreckage type."After much hysteria and a cab ride, Ann and Denis find themselves in London's University College Hospital. She is put to bed in the hope that the delivery will be delayed as long as possible. Ann, who moved frequently as a child, sometimes feels like an awkward newcomer. In a roomful of British mums, she truly is out of her element. When asked if she is ready for tea, for example, she refuses while admitting she's hungry. She's concerned about caffeine and hasn't yet caught on to the fact that "tea" is actually a meal.Ann makes friends eventually with the hospital staff and the other mothers, who help sustain her and Denis during the long ordeal after Jack is born. When Denis must return to New York to work, Ann stays nearby spending most of her time in the Special Care Baby Unit. She describes her admiration of the nursing staff: "If, for example, you haltingly inform a nurse that you have just passed what appeared to be a large part of your brain into the toilet, via the birth canal, the nurse will not gag but instead will admonish you for flushing it away before showing it to her." Yet, she admits feeling jealous and redundant in the face of their efficiency with her baby.Ann, who went to England for a weekend and stayed for five-and-a-half months, felt frequently unprepared. Luckily, for her and her readers, one thing she didn't forget to bring was her sense of humor. As she tells her story, flashbacks to previous situations in her life point to the fact that, while she gives tragedy its due, she can often find life's inherent entertainment value.From the first page, I felt that I had settled into the wry musing of a self-deprecatingly hilarious friend. Despite my frequent bouts of laughing, I also found myself moved, occasionally to tears. A sympathetic physical pang squeezes my heart when Ann speaks of staring into Jack's isolette and willing him to "Breathe, digest, grow." Sometimes laughter and tears come simultaneously, as in the epilogue, in which 13-year-old Jack, now tall and healthy, sees a photo of himself in an incubator with his mom at his side and is aghast --- at her haircut!AN INNOCENT, A BROAD is witty, smart, terrifying, funny, heart-rending and heartwarming --- an absolute delight, from start to finish. --- Reviewed by Terry Miller Shannon

I laughed till I cried

Published by Thriftbooks.com User , 18 years ago
This is not just a memoir for mothers to be. It is Ann Leary's unique, self- deprecating, caustic and hilarious account of what it feels like to be trapped in a foreign country and at the mercy of strangers. Her fears are our fears, her insights become the reader's. You laugh along with her as you would laugh at yourself. She has a way of saying exactly what you would be thinking and nodding your head in agreement and talking back to the book as if it were a very close friend. I felt a need to read aloud passages (and did) to whoever I was near at the time, so that they too, could join me in my delight. I laughed out loud many times, in public places, while reading it on my trip to Ireland (it only lasted the plane flight and one day, as I couldn't put it down) and I wept openly at one point, sniffling into my pot of tea. If you are traveling abroad, it should be at the top of your list and if you are not, read it anyway and you will feel like you are. It's Postcards From The Edge, but without the drugs and rehab. Her own personal kind of hell that must have been brutal while going through it and filled with humor and wit upon reflection. What else can one say, except that as a personal memoir, this one not only delivers exactly why these books should be written, it makes you want more of them. Hoping she doesn't make us wait too long for her next book, to see how she further tackles life, in her own inimitable style.

Published by Thriftbooks.com User , 18 years ago
Ann Leary's book, An Innocent, A Broad, is true page-turner, a fascinating peek into the life of a young family faced with a harrowing experience abroad. The writing is crisp and witty, the story one of deep emotion told with humor and clarity. This reader could often not decide between laughter and tears as the Learys tried to cope with fear, money woes, separation and the unconditional love they felt for their newborn, premature (two pounds, six ounces!) baby boy. This book has it all. It would take a heart of stone not to root for these three and thoroughly applaud Ann's unique courage in dealing with circumstances beyond her control. I suspect Denis Leary will not be the only famous member of the family in the future.
Trustpilot
Copyright © 2022 Thriftbooks.com Terms of Use | Privacy Policy | Do Not Sell My Personal Information | Cookie Preferences | Accessibility Statement
ThriftBooks® and the ThriftBooks® logo are registered trademarks of Thrift Books Global, LLC