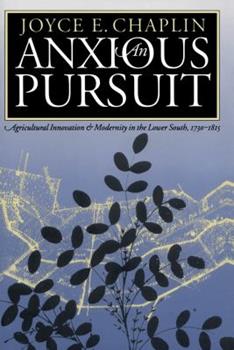 Anxious Pursuit: Agricultural Innovation and Modernity in the Lower South, 1730-1815

In An Anxious Pursuit , Joyce Chaplin examines the impact of the Enlightenment ideas of progress on the lives and minds of American planters in the colonial Lower South. She focuses particularly on the influence of Scottish notions of progress, tracing the extent to which planters in South Carolina, Georgia, and British East Florida perceived themselves as a modern, improving people. She reads developments in agricultural practice as indices of planters'...

Looking forward but stuck in the past

Published by Thriftbooks.com User , 15 years ago
As the title implies, Joyce E. Chaplin has a dual purpose. She describes slave agriculture in the colonial to the pre-antebellum period and studies the Lower South's notions of Western modernity and innovation. While southern whites were aware of and tried to apply modern ideas and innovations, they could not, in the end, disassociate themselves from being slaveholders. In a nutshell the Lower South was characterized by continuity as well as, in Chaplin's words, change and persistence. It was anything but static. In her analysis, Chaplin found that whites frequently used Scottish enlightened thought as an historical framework for assessing their own chances of achieving socio-economic improvement. The Scottish school, Chaplin proposes, is a way to show how whites' were informed of modern contemporary theory from newspapers, books, and local authors. The Reverend Alexander Hewitt wrote a 1770s account of the rise and progress of the Lower South and David Ramsey, a physician and early North American historian, modeled the Scottish statistical efforts of Sir john Sinclair. Landholders were keeping up with the times and not at all languishing in the backwaters enjoying mint juleps on verandahs. Still, while they adjusted to national and world events and adapted their crops, capital and labor, they did not, in the end, relinquish their reliance on slavery. Chaplin's tries to understand this aspect of slavery in order to discover why racism is so persistent. Chaplin offers a cautionary comment in the preface. She says she doesn't want to come across as cynical toward humanity's ability to overcome racism. She succeeds in adhering to her scholarly purpose until, interestingly, at the end of her book she expresses some skepticism. While whites in the Lower South adopted notions of modernity, they adhered to slavery in order to achieve their own ends. In doing so they rejected an opportunity to use their wealth, resources and leadership for reform. Instead they chose to avoid the instability that would be necessary to move beyond slavery.

An ambitious interpretation of the 18th century Lower South

Published by Thriftbooks.com User , 21 years ago
Many histories of the South have focused exclusively on the antebellum period, characterizing the region as economically undiverse, intellectually out of touch with Enlightenment ideals, and culturally static. These assesments create the impression that southerners were backward people who should have known that the society they created was not maintainable. Joyce Chaplin argues that during the period from 1730 to 1815, the region was in actuality a dynamic and innovative place that fell victim only to its own success. To do so, she has compiled an enormous amount of evidence, based on sources ranging from specialized secondary literature on economics, philosophy, and culture, as well as primary documents such as period newspapers, public records, and private correspondence.Chaplin begins her study with a treatment of the predominant economic and political theories of the late 17th century, arguing that southerners accepted the theories of the Scottish school that a commercial society was most conducive to individual wealth creation, and thereby a stronger and more harmonious society. To find products that would create the most wealth, southerners experimented and innovated with various crops and productive means, reflecting the Enlightenment values of scientific pursuit and rationality. In the process, they created a culture that celebrated the right of the individual to pursue prosperity, but that relied upon government aid and regulation, as well as black slavery. Both of the latter aspects were seen as potentially disruptive to their fragile new society, but also unavoidable if individual (and thereby societal) betterment was to be achieved. Even as southerners came to fear the potential of government and slaves (who Chaplin shows to be far from powerless) to challenge their authority, they found that they could not do away with them without undermining the culture of white achievement they had fostered.Chaplin shows that southereners were not hostile to manufacturing, engaging in it on a small scale particularly during times of market disruption, such as during the Revolution and the War of 1812. Cotton and rice production returned as the dominant economic activities of the South because they were by far the least risky and most profitable, not because of any intellectual opposition to non-agricultural forms of capitalization. Chaplin believes that if only the region had continued its economic diversification, the South would not have been so heavily tied to slavery, and would not have experienced its eventual economic and social stagnation.
Trustpilot
Copyright © 2022 Thriftbooks.com Terms of Use | Privacy Policy | Do Not Sell My Personal Information | Accessibility Statement
ThriftBooks® and the ThriftBooks® logo are registered trademarks of Thrift Books Global, LLC