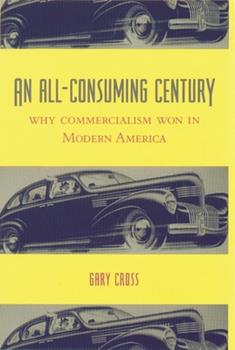 An All-Consuming Century: Why Commercialism Won in Modern America

The unqualified victory of consumerism in America was not a foregone conclusion. The United States has traditionally been the home of the most aggressive and often thoughtful criticism of consumption, including Puritanism, Prohibition, the simplicity movement, the '60s hippies, and the consumer rights movement. But at the dawn of the twenty-first century, not only has American consumerism triumphed, there isn't even an "ism" left to challenge it...

Possibly the single finest work on consumerism in America

Published by Thriftbooks.com User , 13 years ago
This should be essential reading for anyone interested in consumerism in America or just American history in general. I've read a couple of dozen books on one or another aspect of consumerism and this is definitely the best all around book that I've read. Cross does not, as so many do, take primarily a pro or con position on consumer culture, but instead takes the success of consumerism as a fact and asks how this came about and why. He traces the emergence of a full blown consumer culture in the wake of the late-19th-century Victorian belief in the separation of private life from from commercial life. He identifies the specific needs that the increased availability of goods and commodities met and how widespread criticism failed to impede it. The book is divided into five main chapters (along with an introductory and concluding chapter). Two chapters trace the growth of consumerism from 1900 to 1960, then there is a chapter dealing with the criticism of consumerism from a number of sources. The next two chapter carry the story of consumerism from 1960 to the end of the century, especially its dramatic acceleration in the wake of changing national economic priorities under Reagan and his fellow travelers. Throughout, Cross acknowledges the very real needs that consumer goods meet in those who acquire them. He does not give an across the board endorsement to all that consumerism brings nor does he dismiss all of it on principle. There is a pragmatic streak that runs through the book. The lives of most people are sorta boring. Or they would be without selected commodities that enrich the lives of individuals. This is as true of those who have a deeply held set of beliefs, whether religious or secular or otherwise. There is no doubt that we all are repulsed by the bland conformity and lowest common denominator attitude inherent in advertising. We hate the herd mentality and the notion that we are considered highly malleable and easily manipulated. But the truth is that selected consumerism, as Cross points out, can greatly enhance personal happiness and a sense of individuality. And it is certainly not true that everything that we purchase is money thrown away or wasted. Most of my nonessential spending goes for books, DVDs, and music. I'm highly selective in what I spend money on. And I suspect that more people are careful along the same lines. Without the books, television series and movies on DVD, and CDs and downloaded music, that my spending obtains -- not to mention things like TVs, computers, and iPods, my life would be greatly diminished. I suspect most Americans work more for the necessities and recreational items that they can purchase than for any sense of personal satisfaction that their jobs give them. As Cross points out, most jobs are tedious, repetitious, and do not require much mental exertion. One is more apt to struggle with boredom than mentally challenging tasks. The more lamentable aspect of consumeris

Published by Thriftbooks.com User , 20 years ago
Anybody who thinks we do not live in a consumer society has either slept for the past fifty years or has something wrong with their heads. What many people do not realize is how ingratiating consumerism is, how it worms its invidious head into every facet of our existence. It is getting to the point where it seems we exist solely as receptacles for useless products. This is where Gary Cross's book, "An All-Consuming Century" comes into the picture. This is a truly eye-opening book, full of deep insights into this sickness currently ailing our society.Cross's most cogent claim is that consumerism is the "ideology" that toppled all the other -isms of the 20th century. At the dawn of the new millennium, consumerism alone stands on the corpses of fascism, socialism, and communism. Even capitalism (or democracy, whichever you prefer) stumbles in the face of consumerism. It makes no difference which system stands up to consumerism; they all topple in the face of this colossus.Cross attempts to prove his point by showing how, time and time again, consumerism always rises above adversity. In the early 20th century, America faced an enormous influx of immigrants from dozens of countries, all of them speaking dozens of different languages. No problem, as consumerism acted as an integrating system bringing all these people together. There may be a Yiddish speaker, a Frenchman, and a Pole in the same room without any recourse for conversation, but all three of them recognize that bottle of Coke sitting on the table. Cross argues that consumerism allowed disparate people to overcome linguistic, cultural, and class issues while making them Americans. Going even further, consumerism allowed people to define themselves in terms of products. The Great Depression and World War II certainly offered a stiff blow to consumerism and its proponents. Or did it? Not according to Cross, who argues that the expansion of credit buying, installment plans, and advertising allowed consumerism to not only survive, but to learn how to expand its reach in lean times. World War II, which followed the Depression, also served to bolster consumerism. The use of rationing coupons contributed to a national sense of delayed gratification. Once the war was won, people would once again indulge in the sweet fruits of shopping. Moreover, the primary role of government began to move towards the promotion of consumerism by claiming that a multitude of goods were an important sign of the triumph of democracy and capitalism.Even the 1960's counterculture movement, with its rabid mania for anti-consumerism, quickly became co-opted by consumerism. The Hippy lifestyle was a marketable commodity, as was the protest music culture. Those who promoted an individual lifestyle quickly discovered consumerism adjusting its herd marketing of the 1950's to the individual's taste. Niche marketing began appearing everywhere, as did products designed for individual use. In the 1950's, families used their produ

he is my history prof

Published by Thriftbooks.com User , 20 years ago
dude you should give me an a for buying your book it is great

Excellent history of consumerism; some disagreements

Published by Thriftbooks.com User , 21 years ago
It is not easy for me to review this book about consumerism. The subject is far more complex than its critics admit. Mr. Cross's book underscores this point very well, though in the end I feel that he overstates this (see last paragraph). I am an unabashed critic of consumerism, its banality, its lowest common denominator mentality, and yet as an American with sufficient funds I can certainly buy anything I want to, what little that is these days. I do feel grateful that I live in a society where there is such an abundance it is beyond belief. I sometimes wonder what the availability of the things I do want would be if the capitalist machine, which has created and sustained this overabundance of "things" and services, did not function so efficiently. Far more importantly, I have seen and read about societies in which people do not even have enough to eat, where their basic psychological needs are not met. Such peoples are not in a position to philosophize about which is the best economic system, or what is the meaning and value of life. I have always felt some guilt about this in addition to gratitude. Mr. Cross has written a book that very well documents the spectacular rise of consumerism in American in the 20th century. "The All-Consuming Century" is very scholarly yet is also quite accessible. The author brings out a number of penetrating points that I feel are worthy of consideration and discussion by anyone who is interested and concerned about consumerism. For example, he claims that consumerism has been a powerful force for democratization, "creating social solidarities," allowing for participation by widely different groups of people, thus facilitating in a way different kinds of unities. The author shows many contradictions with consumerism, which is why the topic is so complex. To give several examples, consumer goods have excused people from the pain and "humiliation" of exposing who they really are publicly because they can simply buy their way into communities of like-minded consumers. Yet at the same time they perhaps avoid realizing *who* they really are! Consumerism has at once provided the opportunity for people to express their individuality and gain privacy in homes with their own possessions, yet at the same time media (TV and movies) have actually atomized people. Automobiles certainly have provided tremendous freedom, yet the experience itself is essentially limited and homogenized. Perhaps the standardization of experience was true when cars were first mass produced, and not so much today. While I did enjoy the thorough history of 20th century consumerism I did find the details to be very excessive: the chapter "Promises of More" was particularly uninteresting for me because it seemed to be nothing more than the details of consumerism with little analysis. I did find it surprising that even during the depression consumerism did not diminish nearly as much as I would have expected, which cert

Published by Thriftbooks.com User , 22 years ago
The struggle between consumerism and anti-consumerism in America is not a recent phenomenon. In fact, the United States has hosted numerous movements critical of consumption: Puritanism, Prohibition, the simplicity movement, the hippies of the 1960s and the Nader's consumer rights movement. Still, few will deny that American consumerism has emerged a triumphant force. In this book, Cross analyzes the growth of materialism and consumerism in America, and examines the history of U.S. spending and socilizing patterns. Unfortunately, while products once brought people together (think of how the radio promoted domesticity and family time in the 1930s,) Cross believes that today's thriving consumerism is dividing and isolating Americans. "Americans have to bear a terrible responsibility for perfecting twentieth-century consumerism," Cross writes. What we must do now is "find ways to control the overpowering success of our past all-consuming century." Fortunately, this book's got plenty of suggestions for how to do just that. I found An All-Consuming Century accessibly academic, well-rooted in history and fact, but still a very interesting read. Highly recommended to those interested in critiquing American consumer culture.
Trustpilot
Copyright © 2022 Thriftbooks.com Terms of Use | Privacy Policy | Do Not Sell or Share My Personal Information | Accessibility Statement
ThriftBooks® and the ThriftBooks® logo are registered trademarks of Thrift Books Global, LLC