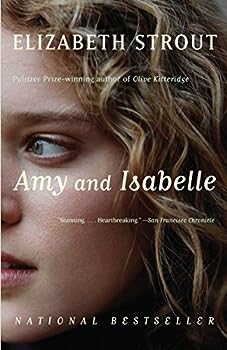 Amy and Isabelle: A novel

This description may be from another edition of this product. In her stunning first novel, Amy and Isabelle , Elizabeth Strout evokes a teenager's alienation from her distant mother--and a parent's rage at the discovery of her daughter's sexual secrets. In most...

Published by tinabeth , 1 year ago
This book would be a great read for moms and daughters Makes you think.....does anyone really listen to anyone?

Published by Thriftbooks.com User , 19 years ago
AMY AND ISABELLE by Elizabeth StroutAMY AND ISABELLE is the story of a mother and daughter, their relationship, and the coming to terms with one's past. On the surface, it appears to be a story about Amy, the teenage daughter that is prone to boredom and feels nothing but contempt for her mother. Amy yearns for a closer relationship with her, but it seems that everything her mother does only irritates Amy further. However, the story is more than just that. The stormy relationship between Isabelle and Amy reveals a typical relationship between mother and teenage daughter, but besides the problem of Amy and the relationship with her mother, the secondary story line belongs to Isabelle, and why she behaves the way she does. What is the secret of her past? It is obvious to the reader that she is hiding a past that she is ashamed of, and it is this reason that Isabelle isolates herself unintentionally from the rest of the world. Isabelle is a single parent, a hard working executive secretary in a factory mill. She's been at the same job for many years, but despite this fact, Isabelle does not seem to have any friends at work, nor does she have any friends outside of the office. She goes through life as if on automatic, day dreaming about being the wife her boss Avery should have, thinking she "belongs". She feels she's above the social status of her co-workers, and feels that if she tried, the upper class women in this small town, such as Avery's wife Emma would accept her as one of their own. The fantasies that Isabelle has during all hours of the day and night is almost ludicrous, as the reader knows that Isabelle does not seem capable to see life as it really is. She does not seem to have a grasp on reality. She also tries too hard to make friends, which often causes her embarrassment. Amy doesn't have many friends either, except for Stacy, who along with Amy, acts out as the rebel teenager, skipping classes, smoking where no one can see them, and sharing stories of their miserable lives. Early on in the story, we find Amy dwelling on her fantasy relationship with her teacher, Mr. Robertson, and soon a real relationship blossoms. It is this relationship that causes the greatest problems between Amy and Isabelle.As the novel progresses, we begin to learn about Isabelle's past. It is this knowledge that moves the rest of the book forward, and it culminates at the end of the book with the revelation of what happened to Isabelle in the distant past.I greatly enjoyed this novel by Elizabeth Strout. She has a wonderful way with words, making the scenes so vivid that I could imagine myself walking amongst the fall leaves with Amy. I also enjoyed the story line and I know that I will be reading more of her in the future.

A DEBUT TO BE ADMIRED AND SAVORED

Published by Thriftbooks.com User , 20 years ago
With Amy and Isabelle, a compellingly told mother/daughter tale, Elizabeth Strout makes her literary debut. We can only hope there are many encores for this first-time novelist who relates her story with resonant assurance. When this is coupled with Ms. Strout's balanced compassion for her characters and her sharp eye for the precise telling detail, Amy and Isabelle becomes a work to be admired and savored. Isabelle Goodrow and her 16-year-old daughter, Amy, make their home in a small New England mill town, Shirley Falls. This is a lugubrious community where in the hot summer that Amy turns 16 and comes to dislike the sight of her mother, the river is "just a dead brown snake of a thing lying flat through the center of town." Their rented house is in an area called the Basin, where many blue collar workers live. Isabelle, a tentative woman who wears her hair in a flat French twist and works in the office room of the mill, would never dream of buying that house because she "could not bear to stop thinking that her real life would happen somewhere else." Hers was a solitary existence, save for Amy. Isabelle is aloof and easily wounded, hurt when the deacon's wife disapproves of the leaves Isabelle had used to decorate the church altar. And, she is proper, always sitting toward the rear of the sanctuary as her mother had taught her to do. This propriety, blended with Isabelle's innate fastidiousness made Amy's illegitimacy even more of a shameful secret. Amy, too, was reserved. She had but one friend, Stacy, with whom she shared cigarettes, candy bars, and confidences during school lunch hours. A good student with a love for poetry, Amy had long golden hair and a slim well-developed body which made her all the more self-conscious. During classes she would duck her head down, hiding her face behind her hair. When a substitute teacher, Mr. Robertson, teases her saying, "Come on out, Amy Goodrow, everyone's been asking about you," there is little indication of how Amy will respond. Yet respond she does as first she is puzzled and then exultant in the burgeoning sexuality that Mr. Robertson coaxes from her. They are, of course, discovered. The forced awareness of Amy's duplicity and also of her emerging womanhood is a devastating blow to Isabelle, who feels she has spent her life for naught. In fact, Isabelle feels as though she has died: "Her `life' went on. But she felt little connection to anything, except for the queasiness of panic and grief." And Amy, too, feels betrayed as she realizes that Mr. Robertson has used rather than cared for her. ".....ever since she found his number disconnected, found out that he had gone away; she could not stop her inner trembling." With Amy and Isabelle Ms. Strout has proven herself to be a considerably gifted writer. She has drawn vividly erotic scenes, and deftly limned some of life's most tender moments. There is every indication that she well understands and cares deeply for the characte

A MUST READ FOR MOTHERS AND DAUGHTERS!

Published by Thriftbooks.com User , 21 years ago
If you are looking for an exciting book, this is not it. However, if you enjoy wonderful characters and a slice of real life, this is the book for you. This book explores the relationship of a mother and daughter and shows the richness of everyday life. There is no great message in this book, other than that peoples' lives are not always what we perceive them to be. I really loved this book and am sharing it with my mother. Your life doesn't have to parellel these characters to appreciate the wonderful writing in this book. Beautiful phrases and wonderful pictures are drawn with words. I highly recommend this book.

This Is The Best Book I've Read All Year

Published by Thriftbooks.com User , 22 years ago
And I read constantly. The author has so much compassion for her characters; she made me ache for them, wish them well, miss them when the book was over. The end was happy, yes, but I disagree that it was too sweet. It was finely wrought and well earned. One of the things that impressed me most about the novel was the author's intricate sense of causality. Unlike Wally Lamb and many of the Oprah authors, she doesn't trace everything to extreme child abuse; yet all of the major characters had their reasons, and their sorrows, which made their mistakes so understandable and poignant. And yes, she does hold parents accountable for what happens to their children but in the most generous sense. As Isabelle says, a mother can not help but pass on who she is. That the book is also hilarious at times (Isabelle reading Hamlet made me laugh aloud) makes it even more wonderful. Thanks to Elizabeth Strout and her editor for redeeming my faith in nineties publishing. This novel has no Hollywood style hook, no easy PC politics, and no clear autobiographical connection that makes it marketable as thinly disguised memoir. But it's a great story: what fiction should be.

A beautiful book about mother/daughter relationships

Published by Thriftbooks.com User , 22 years ago
On the surface, the lives of Isabelle and Amy appear mundane. But the author, Elizabeth Strout, makes us care deeply about this mother and daughter as well as many of the other seemingly uninteresting characters who people this small New England mill town. Until the summer in which this story takes place, Isabelle and Amy exist in a world of their own, not really belonging to any social group within their town. But the same incident that causes a traumatic rift in their relationship, finally enables them to connect with these other individuals as well as to truly understand and accept each other for the first time. Strout's ability to climb into her characters' minds, understanding their longings and fears, is just extraordinary. She treats all her characters (her female characters, anyway) with great compassion and understanding. The character of Fat Bev was a particular standout. Run, don't walk, to buy this book!
Copyright © 2020 Thriftbooks.com Terms of Use | Privacy Policy | Do Not Sell My Personal Information | Accessibility Statement
ThriftBooks® and the ThriftBooks® logo are registered trademarks of Thrift Books Global, LLC