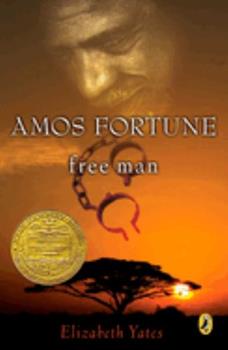 A Newbery Medal Winner When Amos Fortune was only fifteen years old, he was captured by slave traders and brought to Massachusetts, where he was sold at auction. Although his freedom had been taken, Amos never lost his dinity and courage. For 45 years, Amos worked as a slave and dreamed of freedom. And, at age 60, he finally began to see those dreams come true. The moving story of a life dedicated to the fight for freedom.--Booklist

an Inspiring Story of a determined New England slave

Published by Thriftbooks.com User , 19 years ago
Amos Fortune-Free Man is an inspiring semi-true story of a young african prince named At-mun, who at age 15 is captured from his african village, and crosses through the brutal middle passage. In Boston he is sold to a quaker man named Caleb Copeland, who names him Amos. He learns to read, write, and learns to weave and tan. His freinds nickname him Amos Fortune. Indeed he is more fortunate than many slaves of the day. Instead of doing the backbreaking field labor, he would have done had he been sold to a southern plantation, he finds himself doing more managable work, in the New England states.In addition his masters are more kind than most. At around the age of sixty he bought his own freedom, and eventually the freedom of 3 others. In 1779 he moved to the New Hampshire town of Jaffrey, where he established himself as a sucsessful tanner, and died peacefully at the age of 91. I first read this book 3 years ago, and it is among my favorites. I think it should be required reading for every school (and thats saying alot coming from me). Amos Fortune/At-Mun was a truely amazing man, who tried to sucseed and adapt in american/american colonial society, while never forgetting his african heritage. Some of the words and events may be diffucult for unskilled readers,but in all I think it is one of the best books of all time.

Published by Thriftbooks.com User , 20 years ago
Amos Fortune, Free Man" succeeds on many levels. It is an accurate piece of historical fiction, dramatizing the events and people that filled the early days of colonial America. It is compassionate in its approach to the irony and hypocrisy of the times. It is a fitting tribute to all slaves who endured unspeakable hardships from slave to free man.The author begins the story with Amos's life, as Prince At-mun, in the wilds of Africa. The subjugation into slavery and the trip along the Middle Passage is told with accuracy and strength.As an African-American, I was moved by the enduring qualities exhibited by this man, his unwavering desire to be free, his longing to help others, and his pride in himself.All the characters in the book are representative of the citizens of the day. The book is noticeably free of the vilest of the slave owners, but the thought of forced servitude by one man on the other is horrible enough.Descriptive writing of the setting makes the reader feel that he or she is in the hold of the great slave ship, is walking along the busy port cities of New England, and is enjoying the majestic beauty of New Hampshire's mountains.Amos Fortune never really resigns himself to the fact that he is a slave. This constant vigilance for self-rule is the abiding theme throughout. A strong sense of independence is presented in the man's words and deeds.The novel provides the reader with a realistic view of how things really were. By also including the language used in documents of the period, the author contrasts the brevity of modern tongue with the wordiness of colonial times. This enhances the authenticity of the text.The book is a triumph of man over adversity. It is a worthwhile addition to any child's literary background.

A triumphant story of diligence, hope, and compassion.

Published by Thriftbooks.com User , 24 years ago
As an African- American living in New Hampshire, I was particularly proud of Amos Fortunes' achievements, as he made Jaffrey, NH his home. Amos Fortune's story of pride and determination, in the face of tremendous oppression, is a triumphant tale for all ages, and inspires readers to seek the best within themselves and others.

A fantastic book for kids 10 and up, and for adults!!

Published by Thriftbooks.com User , 24 years ago
I brought this book for my 9 year old who is quite good at reading. I wanted her to learn some history of the slaving times from a different perspective. Amos Fortune is a true story and shows the indominable Christian spirit of this man, and the people who assist him in his life. I read it before I gave it to my daughter and couldn't put it down. It's a fairly short chapter oriented book, a two hour read for most adults. Contains some hard words and some historical events that may need to be explained (but are not overwhelming or offensive) to younger kids.
Trustpilot
Copyright © 2022 Thriftbooks.com Terms of Use | Privacy Policy | Do Not Sell or Share My Personal Information | Accessibility Statement
ThriftBooks® and the ThriftBooks® logo are registered trademarks of Thrift Books Global, LLC