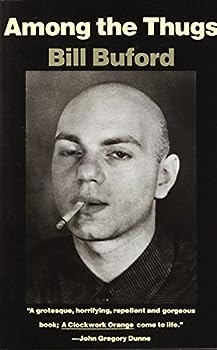 They have names like Barmy Bernie, Daft Donald, and Steamin' Sammy. They like lager (in huge quantities), the Queen, football clubs (especially Manchester United), and themselves. Their dislike... This description may be from another edition of this product.

ultra violence at its best

Published by Thriftbooks.com User , 17 years ago
The old saying of "don't judge a book by its cover" does not apply here. I saw this book, its cover and title, read the back and bought it. It did not dissapoint. If anybody is looking for insight into soccer hooliganism, then this is the book for you. Buford, an American ex-pat, infiltrates the Manchester United hooligans. At first he attempts to share their perspective in his book, but as the story unravels, he becomes one of the hooligans. This gives readers a first hand account of their lives. The scenes are ultra violent. This book is truly a modern day Clockwork Orange and the Man U fans are so crazy and violent that they make the Raider Nation look like a Girl Scout Troop. GREAT BOOK!!

Published by Thriftbooks.com User , 19 years ago
This is the definitive book on hooligans. The writing is intelligent, and Bill Buford often breaks down the society he's studying with an amusing and deprecating wit. On the back of the book it says that _Among the Thugs_ is never condescending, which is the diametric opposite of the truth. The thing that makes this book amusing is its ability to portray the sheer insanity of hooliganism as the circus freak show that it is. Other writers treat this subject with a been-there-done-that sort of nonchalance. Bill Buford, on the other hand, sees the phenomenon through the lens of a mild mannered American who is justifiably shocked and horrified by what he is witnessing. For the American reader, this is the ideal standpoint because it is important to emphasize just how utterly ridiculous, alien, and unfathomable hooligan behaviour is to a civiized American. I highly recommend this book as a fast, entertaining, action- packed, and often hilarious read.

Published by Thriftbooks.com User , 23 years ago
This is a terrifying, fascinating book. I have recommended it to many friends. Buford is a wonderful observer, capable of capturing and relating the mood and mayhem of his surroundings. The subject matter is at once hilarious and frightening. In one moment, drunken footballs fans are described crawling beneath the seats of an airliner as they stowaway on a flight to Europe. In the another, an innocent bystander is beaten bloody in front of his family as these very same supporters rampage their way to a match. In simply describing these scenes, Buford is brilliant. Where he, and the book, overreach is in trying to determine why such seemingly ordinary people regularly go off the deep end. Buford's attempts at explanation are somewhat ponderous and, at the same time, superficial. Still, the stilted social commentary hardly detracts from what is an otherwise excellent read.

Definitely one to read.

Published by Thriftbooks.com User , 23 years ago
I couldn't stop reading this. We went to a friends house and I sat and read this book in the corner (easily one of the most impolite things I have ever done, but there was no way in hell I was stopping reading). I lived in London in the late eighties, working between Highbury & Islington tube station and Arsenal's ground and can remember the shops and pubs closing early on Wednesdays if there was a game. I can also remember the warnings not to work late, etc. I never understood why until I read this book. These people were (are?) the cruelest, nastiest people alive, and Bill Buford deserves endless credit for the quality of this book.One last thought, we often hear that it was the average person that served as the guards in concentration camps, etc., well after reading this book I think it is the thugs who are described here, not the average Joe - so I feel better about the rest of humanity.

Published by Thriftbooks.com User , 24 years ago
It was Bill Shankly, ex Liverpool manager, who said "Football is'nt a matter of life and death, it's more important than that". This book goes someway to capture the passion and importance of Football in English culture, and the extreme lengths that some so called supporters go to feel that they belong. As a true English Football supporter, I felt somewhat annoyed that readers of the book from other countries would feel that all English Football supporters behave in this manner, this is NOT true. But this book does accurately portray the minority who caused and still cause the atrocities described. The book works on two levels, to shock with horrific stories of brutal violence, and at a much deeper level to explain crowd behaviour and how this can be manipulated. Overall this is a valiant attempt by an American to explain English Football violence, which to my suprise was successfull.
Trustpilot
Copyright © 2022 Thriftbooks.com Terms of Use | Privacy Policy | Do Not Sell My Personal Information | Cookie Preferences | Accessibility Statement
ThriftBooks® and the ThriftBooks® logo are registered trademarks of Thrift Books Global, LLC