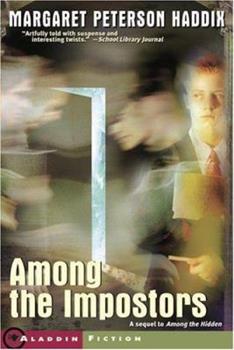 (Book #2 in the Shadow Children Series)

Danger continues to loom over Luke now that he's out of hiding in the second book in bestselling author Margaret Peterson Haddix's Shadow Children series. Luke Garner is an illegal third child. All his life has been spent in hiding. Now, for the first time, Luke is living among others. He has assumed a deceased boy's identity and is attending Hendricks School for Boys, a windowless building with cruel classmates and oblivious teachers. Luke knows...

Not her best work, but not bad

Published by Thriftbooks.com User , 14 years ago
This book is part of the shaddow children series and is targeted towards 5'th-8'th grade. Luke is a shaddow child who has recieved a secret identity. He is sent to a boarding school for troubled kids, maily hidden children. The system of the school is messed up and luke can't find his way around, he consistently gets demerrits, though asfar as luke can tell, they mean nothing. The teachers are innept and can't tell a student from a desk. Luke is bunked with boys that constantly torture him because he is a farmer boy. Looking for something to remind him of home, luke sneaks behind the school and plants a garden. Now luke is cutting all his classes to work his garden, until one day it has been trampled. [spoiler warning] lukes garden was trampled by a group of hidden children who are organizing a rebbelion.[spoiler warning] Objectional material: Luke is tortured with humiliation by the boys in his dorm. Luke always cuts classes Teachers are porrayed as idiots

Not as good as the first 1

Published by Thriftbooks.com User , 17 years ago
OK, I think this was an OK book, but it was defitinley not as good as the first one. The story plot goes as followed: Luke Garner, an illegal third child, tries to fit into life where the government rules. They make a law that third children are not allowed, because of food shortage. That means all the third children have to hide, and if the Population Police ever find them, they would be dead. Now, you have to read the first book before you read this book, because they talk alot about things that happened in the first book, called "Among the Hidden." Luke's neighbor, Mr. Talbot, a Population Police that is secretly giving Third Children fake I.D.'s and helping them along their back, helps Luke by sending him to a school called "Hendrick's School of Boys." Luke misses his home, and he starts to make a garden because his parents made a garden at his house. One day, while Luke goes outside to check on his garden, he sees that it is ruined. He then hears voices so he hides behind a tree. There comes a boy that picked on Luke, called "Jackal Boy", and soon Luke turns "friends" with Jackal Boy (Jason). Then he learns that Jason is making a way to help Third Children. Luke feels this is his chance to help Jen, a former friend of his. It is not as good as the first book, and, in fact, it is the worst book in the series. Although it is still rated 5 stars. All the books in the Series: Among The Hidden--the first book in the series. Among The Imposters--the second book in the series. Among The Betrayed--the third book in the series. Among The Barons--the fourth book in the series. Among The Brave--the fifth book in the series.

MPH Has Done It Again! This is better than Among The Hidden

Published by Thriftbooks.com User , 21 years ago
When "Lee Grant" goes to school, he is not used to going to school, "although he has been going all his life." The truth is, Lee Grant is dead. Luke Garner is a third or shadow child, a violation of Population Law. All families must have 2 children max because of food shortage. So Luke gets a fake ID, a chance to come out of the shadows, to meet new people. So LEE GRANT (A.K.A Luke Garner) enters Hendricks School for Boys, the equivelent to Harrow School for Girls. Tortured and getting a record breaking 10 demerits is not what Luke calls meeting new people. Luke is also scared. Do you call showers ang toilets with nodoors, eight nosy people to a room and only one table for his grade very private? No! Luke is worried that someone will catch him. Turn him in, which means death. He knows that from previous expirience. Then Luke finds a door, leading to a wood. THat's his ticket from strange boys and weird teachers. THis book is amazing! It's kind of slow a t first but keep reading! I was reading it at a restaraunt and I kept gasping, and everyone kept turning around and looking at me. I wouldn't even eat! Now my dad is reading it and he loves it!

Published by Thriftbooks.com User , 21 years ago
Margaret Peterson Haddix has done it again! Among the Imposters is an exciting book that refuses to be put down. As a sequel to Among the Hidden it rates very highly. Many sequels often lose some of the power that the original book portrays, however Among the Imposters not only is an excellent story in its own right, it also readies the reader for the next installment in the series. Third children in this future society are not allowed. In fact families are closely monitered by the Population Police. However many third children secretly exist. Luke,our protagonist in this story, is a boy that has lived in secret with his parents for all of his life. The discovery that other third children exist is new to him. He is helped by a neighbor and former father of a third child. Luke is given a new identity and is enrolled in a private school. At first Luke lives in terror that he will be discovered. But as time goes on he realizes that all is not as it should be in this school. The author surprises the reader with many suspense filled twists in the plot that keep you guessing until the end. Students and teachers in my school were so enthralled with Among the Hidden that they are lining up for the opportunity to check out Among the Imposters. As the librarian, it will be my challenge to keep this series current!

It just gets better

Published by Thriftbooks.com User , 21 years ago
Margaret Peterson Haddix does it again with the sequel to Among the Hidden. Luke, now Lee, arrives at a school where no one seems to notice him, especially the teachers. How odd to spend one's life in fear of being discovered, then finding out no one cares to discover you at all. But it doesn't stop there. The school itself is odd, with no windows, and the students are equally strange- some bullies, other withdrawn. Soon, Luke discovers the school isn't all it's meant to be. Well written, easy to read, and equally frustrating in the ending as the first. Thank goodness Margaret Peterson Haddix has agreed to seven books in this series. I hear the next is Among the Betrayed. If you are a Haddix fan, this is a must read.
Trustpilot
Copyright © 2022 Thriftbooks.com Terms of Use | Privacy Policy | Do Not Sell or Share My Personal Information | Accessibility Statement
ThriftBooks® and the ThriftBooks® logo are registered trademarks of Thrift Books Global, LLC