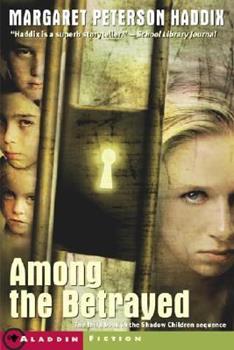 (Book #3 in the Shadow Children Series)

What does it mean to save yourself? Nina Idi -- a third child in a society where families are allowed only two children -- has been betrayed by the boy she loved, and arrested by the Population Police... This description may be from another edition of this product.

Among The Betrayed by Margret Perterson Haddix

Published by Thriftbooks.com User , 15 years ago
Nina is among the many shadow children in her school. She has done nothing wrong in her life, except for being illegal. One day, she woke up in a prison cell, handcuffed to the ground. She finds out that her beloved, Jason, has now betrayed her. Later on she meets a new character who she has called "The Hating Man". He tells her that she has to help him with something or she will soon be killed. Her task is to go into another cell with three other shadow children. She has to find out info about them and see if the truly are shadow children. Later on, she starts talking to them and they become kind of close. But, they won't tell her anything because they think they are being watched by hidden cameras. Which they weren't. "The Hating Man" was secretly feeding her humungous thanks giving meals, bribing her to try harder. She does'nt have that kind of cold heart, how evil. If he were to find out they were shadow children, he would kill them in an instant. One day while she was talking to him, a gaurd burst through the door. He was holding his neck, the gaurd had been poisoned. "The Hating Man" wasnt paying attention to her. Oddly enough, the keys were sitting right there on the table. She used this opportunity to escape, she grabbed the keys and ran. She opened up the cell and got the three kids. They all escaped together. No one even came looking for them. She told them about the school that she thought was safe, so they could temporarly live there. The younger kids actually knew how to get there. Once they got there, they finally settled in. She discovered a planted garden behind the school. They stole fruits and vegtables during the night. One night, Nina went to pick some more and some one pounced on her. It was Lee. She was dragged off to Mr. Hendricks house not too far away. After talking to him, she saw something. It was "The Hating Man". He was actually Jen Talbot's dad under disguise. The whole jail thing and escape was planned for the safety of them. She had been set up just to see if she could be trusted. Later on she found out everything and was glad she was safe. Well, for now. She later actually agreed to help them. Had Nina just agreed to help fight the population police? Yes, she had. The settings were in the jail building, outside of the Hendricks School, and inside Mr. Hendrick's home. This book was fantastic, and I would definitly recomend this book to anybody that I know!

Amoung The Betrayed Review

Published by Thriftbooks.com User , 16 years ago
The book Among the Betrayed was a really good book about a thirteen year old girl named Nina, she is a third child. In the place she lives at third children are not allowed, and if they are born the population police will come and take them. One day while she was at school the population police did come and take her. They brought her to a dark, cold cell. Nina soon finds out they don't know that she really is a third child, but they arrested her because the population police say Nina and her boyfriend tricked them into arresting children that really were not third children just so her and her boyfriend could get a reward. The Population Police then make her a deal. She could save herself from getting executed and help them into tricking three children into admitting that they are third children or she could die. Will Nina choose her life or the kids? I REALLY liked this book a lot. I would not stop reading it because I always wanted to find out the decisions she makes. A reason I liked this book was because there was always action. All the time the characters were doing something to keep you reading. Also this book was a lot about life or death situations. I like those kinds of books. There was nothing wrong with this book. The people who would like this book are the people that like books about life or death situations. That is what the whole book was practically based on. Also the people that have read the other books to this series would like this one. This one is a lot like those. If you have read other books from Margarett Peterson Haddix, you should like this one. I know I did!!

Published by Thriftbooks.com User , 18 years ago
Among the Hidden is an excellent book.If you have never read this book you should. If you were reading it you would've never guessed the ending. It took me by surprise. Thise book is mostly about Nina. She is suppose to betray three kids that got caught by the population police and she is suppose to get them to talk. she is really suppose to get them to tell her if they are really thrid childrens with a fake I.D's. If she dosen't the population police will kill her. What do you think? Will she betray them to save her life? You have to read the book to find out.

Published by Thriftbooks.com User , 19 years ago
Hey! ... this book by Margret Peterson Haddix is a story about love, hatred, betrayal, and surivivsl. the main character is Nina Idi, or is it? Nina ( thats is her fake ID name) is an illegal third child. her real name is Elodie. The setting takes place at a prison. It adds to the mood because everyone acts depressed. It is not a normal jail it is a jail for illegal third children. Unfortunatly Nina was found at Harlow school for girls. I love this book! I would recommed this to anyone! That's why I gave it 5 stars

Published by Thriftbooks.com User , 19 years ago
Among the Betrayed by Margaret Peterson Haddix is a science fiction book where families are forbidden to have more than two children.Nina, the main character and also the third child, is betrayed by someone she loves, and later falsely accused of treason and imprisoned by the Population Police. The Population Police are in charge of capturing third illegal children. Nina is put into a no win situation where she has to choose to betray the friends she has come to trust or be executed. When Nina has an opportunity to escape, she takes her three new friends, Matthias, Percy, and Alia along with her. When they run out of food, the decision is made for Nina to find help in a school she knew, Hendrix School for Boys. Nina is captured and taken to Mr. Talbot for interagation. What does Nina soon learn? Nina soon realizes that everything is not what it seems, and she realizes that she has been put to a test by the people who are trying to save her. Does Nina pass the test?I like the way Haddox made Nina a believable character, and showed how she agonized over her decisions she had to make. I believe teens today can related to Nina in that, they also, have tuff decisions in their life to make. Read the book, it's awesome!
Trustpilot
Copyright © 2022 Thriftbooks.com Terms of Use | Privacy Policy | Do Not Sell or Share My Personal Information | Accessibility Statement
ThriftBooks® and the ThriftBooks® logo are registered trademarks of Thrift Books Global, LLC