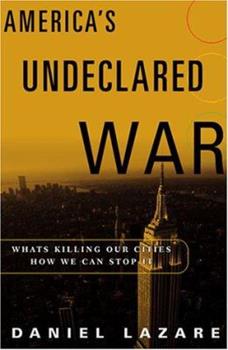 America's Undeclared War: What's Killing Our Cities and How We Can Stop It

"I view great cities as pestilential to the morals, the health, and the liberties of man," wrote Thomas Jefferson in 1800, sounding a note that has echoed throughout American history. In this bracing reexamination, Daniel Lazare traces the progress of America's unwavering war on its cities and looks at the profound consequences. From Jefferson through Henry Ford and Franklin Roosevelt to the present, we have labored to wither our cities, simultaneously...

The War on Urbanism

Published by Thriftbooks.com User , 17 years ago
Daniel Lazare's America's Undeclared War: What's Killing Our Cities and How We Can Stop It carries a rather sensationalist title, but drives home a good deal of hardheaded historical analysis before succumbing to some woolly proposals. Lazare exposes antiurban bias from Jefferson through the Progressive movement, Fordism, Mumford (!) and their latter-day heirs. His take on the Progressives is revelatory: their distaste for urban "squalor" and their do-gooder program of uplift make me reach for my Mencken. He is right to chastise acclaimed urbanist Jane Jacobs for her anti-political mentality: her "microscopic approach was both her strength and her undoing." His critique of the Constitution, which references his previous work The Frozen Republic: How the Constitution is Paralyzing Democracy, warrants further inquiry. But he falls prey to an ungrounded exaltation of democracy that almost derails his sometimes sensible solutions.

Published by Thriftbooks.com User , 20 years ago
Too many weird tangents. As other reviewers have pointed out, Lazare correctly identifies a variety of government policies that have caused urban decay. But most of his points have already been made by other commentators (e.g. James Kunstler, Alex Marshall). Also, Lazare goes off on tangents about things like the life of Henry Ford, labor union policy, etc. which really aren't that relevant to his major point. Like many leftish urbanists, Lazare seems to think that good urbanism leads to a liberal welfare state -- yet that most urban of industrialized nations, Japan, has a government as small as that of America.

Published by Thriftbooks.com User , 20 years ago
Lazare's account of the systematic destruction of American cities is an indispensable eye-opener. Lazare demolishes the conventional myths that pass for analysis in most discussions of this topic, and reveals the extent and origin of anti-urbanism in American life.

The Rise and Fall of the American City

Published by Thriftbooks.com User , 21 years ago
Daniel Lazare's excellent book "America's Undeclared War" is a book that I heartily recommend. I was particularly impressed by his unique and intriguing approach to American history, from the point of view of the city. He traces American history back to the notorious conflicts of Jefferson and Hamilton. One aspect of their feud, should the country develop a southern-agrarian or a northern-urban economy? Jefferson, despite his democratic rhetoric, was a southern slave owner. With his election as president in 1800 his party promoted policies that were anti-urban, anti-federal and jingoistic.The north was intent on developing industry. It needed a strong infrastructure-roads, canals, and an educational system. All this was opposed by the south. As a result the development of cities, which existed almost entirely in the north, was hampered by a hostile political establishment.With the coming of the railroad, a major social and economic revolution took place. Before the advent of the railroad, land transportation was so onerous that it was rarely attempted. It cost as much to ship goods 30 miles overland as it did across the Atlantic. The northeast was cut off from the interior--most interior traffic was confined to the Ohio and Mississippi rivers--until the Erie and other canals opened a connecting water route. The railroad was the technological miracle that caused an expansion of the cities. Shipping costs dropped so much that water transportation, rivers and canals, could no longer compete. Cities grew like weeds. Wherever the trains stopped passenger and freight flowed and new towns and cities grew.The advent of the Civil War broke the strangle hold that the south had on the country's policies. Laws favorable to industry that had been stymied for decades were now enacted.But the growth of the cities brought slums, reformers, and radicals that worried the industrialists; and sex, gambling, and drinking that upset the moralists. By the late nineteenth century the middle and upper classes were very concerned. How could these problems be overcome? Disburse the troublesome masses! Many prominent leaders could be counted on. They ran the gamut from industrialist Henry Ford to urban reformer Jacob Riis. But what could cause a reversal in the growth of the cities? A new technological upstart. The automobile! This new mode of transportation could dilute the effects of the trains. Mass urban transportation of trains, subways and streetcars was no longer necessary for the working man to get to his job.With the coming of the New Deal--Roosevelt was another advocate of diluting the city masses--government subsidies provided a major impetus. Changes occurred quite rapidly after World War II. The government took built roads throughout the country; and backed a new type of mortgage--low or no down payment, low interest and long (30 year) terms--a major departure from previous mortgage financing. In addition, there were the tax benefits for home ownership, de
Trustpilot
Copyright © 2022 Thriftbooks.com Terms of Use | Privacy Policy | Do Not Sell My Personal Information | Accessibility Statement
ThriftBooks® and the ThriftBooks® logo are registered trademarks of Thrift Books Global, LLC