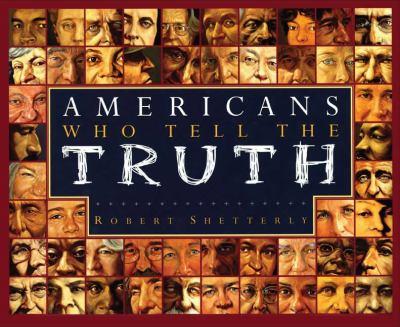 Americans Who Tell the Truth

Stunning portraits and stirring words of brave citizens from all walks of life. As we in the United States have the right to speak the truth, we also have the need to be told the truth. Americans have used this freedom to motivate and empower others to challenge the status quo. Artist Robert Shetterly's fifty portraits offer a powerful perspective on what it means to be American and to be part of a democratic society.

Makes me proud to be an American

Published by Thriftbooks.com User , 16 years ago
A lovely book filled with emotionally compelling paintings and wise quotations. It expresses progressive values that I and tens of millions of other Americans would love to impart to the children in our families. It shows that dissent has played a key role in making America a decent and moral country - "with liberty and justice for all" -- not just for the rich and powerful. Why is it that, when we express these values, conservatives say we hate America? The people on the far right say they believe in freedom, but when a decent and talented person like Robert Shetterly expresses his freedom he is called a Marxist and accused of spewing out garbage. Quite frankly, the New Testament is more Marxist that just about any of Shetterly's heroes. According to the Book of Acts, the disciples of Jesus did not believe in private property and shared everything equally. Jesus told the rich man to sell all he had and give to the poor. Jesus began his ministry by declaring an acceptable year of the Lord, which is a Jubilee year when wealth is redistributed in order to help the poor and the disenfranchised. So why don't you right-wingers start turning your slime machine against the Bible? Shetterly's heroes are people like Martin Luther King, Jr.; Dorothy Day; Amy Goodman; and Terry Temepest Williams. If this isn't your cup of tea, go buy a book about Social Darwinism or some neocon fantasy about American hegemony. It hurts me that you would share these values with children, but it is a free country.

Disregard what you read as negative on this book.....

Published by Thriftbooks.com User , 16 years ago
...because this book is brilliant. Baseless, harpy reviews aside, this beautifully illustrated book is what America should be about. If one were to actually research what each of the members detailed in this book stood for, they'd realize that truth, integrity and honor are at the very core of their being. The rants of the dissenters of this book sound amazingly Limbaugh and Coulter-esque, and therefore should be taken with a rather hefty grain of salt.

Words from a teacher and curriculum writer for this book, Michele Hemenway

Published by Thriftbooks.com User , 16 years ago
The responses to the book, "Americans Who Tell the Truth" were of great interest to me, given that I have used the book in the classroom and also worked with the artist, Rob Shetterly here in Louisville. While here, Rob worked with a middle school and high school program, both well regarded. Additionally, I wrote a curriculum for other teachers to share and to explore that appears on the website. Neither school where Rob Shetterly worked and teachers pursued the curriculum, could be perceived as organizations interested in anything more than asking children to think and to ponder their place as citizens of this country. When I wrote the currriuclum that accompanies the book and is published on the website, it had not occurred to me that anyone would use the book to persuade children to "hate" their country or anyone else in the world, for that matter. It had not occurred to me that we would be teaching children anything other than a way to look honestly at the country they live in and to consider those things that might impact the future they would inheirit. Rob Shetterly, in my mind and in my classroom, helped my students to understand that their voice DID matter. We had students who did not agree with many of the things said by individuals in the portraits or with Rob, himself. But this was never the point of the study. The intention was to allow students to see first hand , from Rob himself, that when one has a feeling about one's country that using the gifts you have to express those can inspire and give hope to others. I will ask anyone who sees this otherwise to look at student comments on the website and I will invite them to write reviews here of their experience. One fifteen year old student shared in her evaluation that until now she had never wanted to be involved as a citizen; like so many others, she didnt' think she could make a difference. What she saw in the portraits of Abe Lincoln, Thoreau and Amy Goodman and the many others , was that it WAS possible to be heard. Another student asked me why he had never heard of many of these people. Why, indeed? To honestly look at our country and say, where do we go from here? This is the beauty and gift of the book.

Published by Thriftbooks.com User , 16 years ago
I had the privilege of seeing the exhibit at Columbia University in June, 2005. It was elegant and inspiring. What makes America a great nation is our right to question the party line. Indeed, that's the only way progress has ever been made. I felt proud of my country walking around the magnificent setting of this display. These were and are courageous people. The derogatory reviews on this website seem obsessed by notions of "Marxists" who "hate America," thus rendering the book "garbage," or worse. I suppose these folks want to keep young minds safe from the destructive thoughts of famous American traitors such as Dwight D. Eisenhower, Walt Whitman, Susan B. Anthony, Frederick Douglass, Chief Joseph, Martin Luther King, Jr., Henry Thoreau, Eleanor Roosevelt, Mark Twain, Helen Keller, John Muir, Woody Guthrie, Rachel Carson, Rosa Parks, and Bill Moyers, to name a few. All Commies? Please! What are the detractors so afraid of? Can't they tolerate viewpoints that differ from theirs? The truth that America is not quite as "clean" as they'd like to believe? That we're a work in progress, and progress requires dissent, which involves uncomfortable soul searching? See for yourself. Be inspired. Lord knows we need it now more than ever.

Published by Thriftbooks.com User , 16 years ago
Finally, a book that doesn't include the usual faux USA heroes: George Washington, named the "Town Destroyer, who had innocent Iroquois women and children butchered and who praised his soldiers for skinning them and using their skin to repair their boots; Andrew Jackson who violated over 40 treaties w/ the Cherokee people and forced them off their land and sent them packing to OK ill-equipped (a death march called "The Trial of Tears") resulting in the death of over 1/5 of the Cherokee population; Thomas Jefferson who raped his 15-year-old slave Sally Hemmings, raped her repeatedly over the years, impregnating her, even as he inveighed against the evils of slavery; etc. One way to measure the objectivity of this book is to note the unholy alliances it has forged among its detractors. Consider the review by the "liberal" Alan M. Dershowitz printed in the right-wing reactionary FrontPageMag.com. Why does Dershowitz find Shetterly's exercise in free speech so offensive? Apparently because Shetterly, appropriately, lists among the heroes Noam Chomsky and Amy Goodman. I suspect that Dershowitz opposes Chomsky's inclusion because he still can't comprehend the possibility of an intellectual Jew unwilling to sacrifice his moral and intellectual integrity for the sake of the real estate aims of the nation of Israel. And he might oppose Goodman's inclusion because her program (Democracy Now) occasioned Norman Finkelstein deconstructing Deshowitz's "The Case for Israel" on the 9.24.03 broadcast before Deshowitz's helpless eyes. Dershowitz opposes the book because "some of [the] hard-left radicals" the book includes "provided justifications for precisely the kind of violence that occurred on 9/11." This claim is laughably preposterous and Dershowitz knows it. He knows perfectly well that "reasons" is not the same as "justification" logically, a distinction that the USA policy makers ignore at our own peril. Many will continue to write negative reviews of this book. They must. It smashes the cliché icons by omission. Ps. Jamescrock's and Antok's reviews below contain passages plagiarized from Dershowitz's "Hate-America Lies For Kids" published on FrontPageMag (7.21.05 issue). No one should be surprised.
Trustpilot
Copyright © 2022 Thriftbooks.com Terms of Use | Privacy Policy | Do Not Sell My Personal Information | Accessibility Statement
ThriftBooks® and the ThriftBooks® logo are registered trademarks of Thrift Books Global, LLC