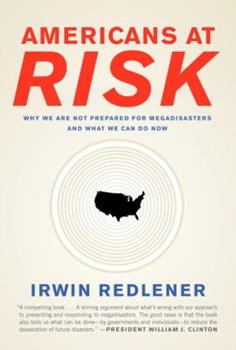 Americans at Risk: Why We Are Not Prepared for Megadisasters and What We Can Do Now

This important book by one of our leading experts on disaster preparedness offers a compelling narrative about our nation's inability to properly plan for large-scale disasters and proposes changes that can still be made to assure the safety of its citizens. Five years after 9/11 and one year after Hurricane Katrina, it is painfully clear that the government's emergency response capacity is plagued by incompetence and a paralyzing bureaucracy. Irwin...

Excellent: The Emperor and the Assassin

Published by Thriftbooks.com User , 16 years ago
I can understand why this movie may have been too violent for mainstream American movie theaters. However, those were violent times and this movie is both complex and dazzling. It is certainly not one that you will ever forget. There are similarities to "Curse of the Golden Flower." Both are visually stunning and full of political intrigue.

An Urgent Need for Government Preparedness Spelled Out in Foreboding, Realistic Terms

Published by Thriftbooks.com User , 16 years ago
The coming Armageddon is quite realistically covered by author Irwin Redlener, the Director of the National Center for Disaster Preparedness at Columbia University, in a variety of forms in his foreboding tome. In meticulous, sometimes bitingly dramatic detail, he paints five fatalistic scenarios - an avian flu outbreak in New York City; a major earthquake in Seattle; a nuclear attack; a train wreck that causes the release of toxic chemicals; and a terrorist attack that targets elementary schools in Arizona. Within each scenario, we see a chaotic morass of bureaucracy, and Redlener points out real-life examples of such deficient actions that make the aftermath he describes of such disasters feel palpable. For instance, in mentioning an actual attack on a school in Beslan, Russia, the author brings to light the possibility that terrorists could go after soft targets, specially women and children, since such sacrifices are more typical in Muslim. He also discusses the threat of nuclear detonations. Just as North Korea proved today, terrorists could use newer technology to assemble small nuclear weapons covertly. Moreover, there are liquid explosives and other such low-tech threats that can be used in even more clandestine ways. The variety found in the possible onslaughts is daunting, especially to the reader, and sadly, no one, from Redlener's informed perspective, seems prepared to handle these disasters optimally. Starting with FEMA's lethargic response to Katrina, there is a wellspring of stories about how Homeland Security has mishandled both money and expertise. In the most prescriptive section of the book, the author describes a nine-point strategy which amounts to validating good common sense and a more disciplined approach to organization by the government. The author is particularly critical of the random nature of American preparations as opposed to the more pivotally positioned and prepared European nations. Redlener begins his recommendations with having the 9/11 Commission reconvene to address preparedness efforts, and including the expansion of the military role in planning for and responding to major disasters. He also discusses the key role played by volunteer organizations in recovering from mega-disasters with little organized support from the government. Most tangibly, Redlener discusses citizen preparedness and our sometimes surprising history of lapses in this area, even when such efforts were highly publicized during WWII. Despite common belief, little was actually accomplished in this area at the time. The current threat of WMDs is quite different from the A-bombs of yore since they are so focused in devastation, but the need for personal preparedness is still quite evident. While it may come across as prosaic to tell citizens to stay healthy and fit, Redlener knows full well that it comes down to the individual to ensure larger plans can be mobilized. This is a hard read at times but most worthwhile.

Published by Thriftbooks.com User , 16 years ago
> This provocative and often disturbing book reveals that Dr. Redlener has certainly acquired an impressive grasp of the potential horrific catastrophic events that <br />> > our country may have to face in the future. His experience <br />> > as Director of the National Center for Disaster Preparedness and vast <br />> > research on the topic make this book likely the #1 most credible account of <br />> > the potential catastrophes our country may confront going forward and insights <br />> > into what the government and we as United States citizens can do to help <br />> > damper the effects of such an event. Redlener's book, while undoubtedly frightening, is as real as it gets. <br />> > Any one of us could be effected by some sort of megadisaster at any given <br />> > time and Dr.Redlener at least provides hope that the outcome of such an event <br />> > is not completely out of our hands. This book is a must read for anybody <br />> > who has any interest in learning real ways to not only protect oneself but <br />> > to contribute to a more successful response by our country as a whole in the <br />> > wake of such a disaster. <br />> > - <br />Robert H. Reiner, Ph. D. <br />Executive Director <br />Behavioral Associates <br />

A must read for all concerned citizens

Published by Thriftbooks.com User , 16 years ago
Dr. Redlener talks about the following five megadisasters and what can be done to improve our response to them: an outbreak of avian flu in New York City; and earthquake in Seattle and the Puget Sound; the detonation of a nuclear bomb in a major city; an accidental chlorine release in a tornado-risk zone; and, finally, the targeting of American children by terrorists. After the interesting discussion of each megadisaster, Dr. Redlener points out the many things we can do to improve our response to them. He very thoughtfully discusses the four barriers that prevent Americans from being in a state of optimal readiness. The first barrier is the lack of goals and accountability assigned to the monies given by the Feds. The second barrier is the failure to imagine the consequences of situations before they happen. In one example of this barrier, he talks about the fact that all nursing homes in New Orleans were required to have an emergency evacuation plan, and they did. However, all the plans called for evacuating residents to other nursing homes. After Katrina 80% of the nursing homes were damaged and the flooding made them inaccessible. The third barrier is the lack of leadership as demonstrated by DHS Secretaries Brown and Chertoff. The fourth and final barrier is what he calls the strange psychology of preparedness. For example, one in three Americans believes a terrorist attack will happen within a year; however, fewer than half Americans have a family emergency preparedness plan. The thinking follows the line of there will be an attack, but it wont happen me. We are introduced to Prochaska's "Stages of Change " model to help us better understand how people normally modify their behaviors. By understanding this model we will be better able to create a culture of readiness. We are also introduced to the efforts other countries have undertaken to better prepare and deal with megadisasters. I enjoyed reading about what other countries were and are doing to better prepare for handling megadisasters. I did particularly like the Chinese example that he used. A major earthquake happened in the Qinglong district of China in 1976. It was between a 7.8 and an 8.2 magnitude on the Richter scale. The disaster claimed 240,000 lives and injuring another 165,000 people. The city of Tangshan was virtually destroyed. Qinglong, a community close by, suffered from the same quake, however, the outcome was very different. Two years earlier, Qinglong was warned about the possibilities of an earthquake striking their city. They took the warning seriously and prepared for the day when it might happen. The death toll in Qinglong on July 28th, the day of the quake? ONE --- a man died of a heart attack!! As Dr. Redlener said, "the lesson is overwhelmingly important: mitigation, education, and planning work". The only megadisaster that could happen now is not getting this book, and the answers it provides, into the hands of our politicians!!!

Perspectives of a College Sophomore

Published by Thriftbooks.com User , 16 years ago
Dr. Redlener is, now undoubtedly, the leading expert in the field of Disaster Preparedness. His approach, more than simply theoretical rhetoric, is an excercise in pragmatic problem solving. Dr. Redlener's book should be read by anyone who considers him-or-herself an intellectual, a serious student or a concerned American. JDC -- Sophomore, Stanford University
Trustpilot
Copyright © 2022 Thriftbooks.com Terms of Use | Privacy Policy | Do Not Sell My Personal Information | Cookie Preferences | Accessibility Statement
ThriftBooks® and the ThriftBooks® logo are registered trademarks of Thrift Books Global, LLC